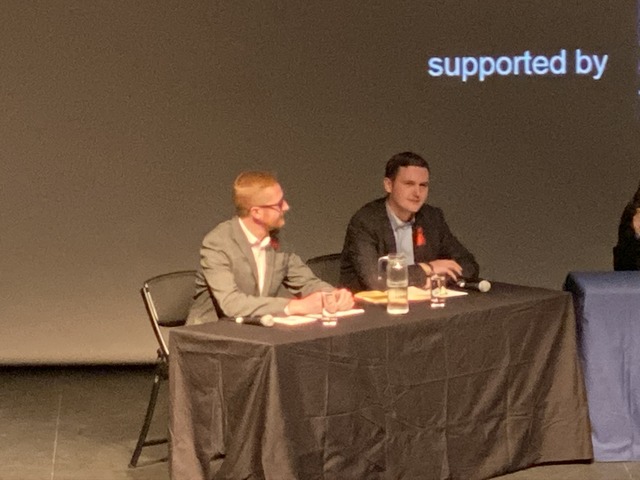 Joe Miller, right, and Lloyd Russell Moyle at the hustings

An election candidate’s claims that Moulsecoomb Primary School failed its pupils has prompted an angry reaction from campaigners.

The backlash started after  Conservative parliamentary candidate for Brighton Kemptown Joe Miller described the school as “failing children year on year” at a University of Sussex hustings.

He said Labour candidate Lloyd Russell-Moyle, who joined staff striking against plans to turn the school into an academy on the picket line on Thursday, was not protesting outside the school when it failed its pupils.

His comments were reported by the local democracy reporting service on Twitter, prompting Mr Russell-Moyle to hit back, saying he had visited the school every month for three years.

Ulrike Hoffman from the Hands Off Moulsecoomb School campaign then tweeted: “His statement shows an utter lack of respect for the community who he wants to vote for him and a even greater lack of knowledge around this topic.”

Referring to Mr Miller’s scheduled appearance at the school on Tuesday, she said: “We look forward to the Education Husting at Moulsecoomb Primary School!”

Her post was backed by the official Hands Off Moulsecoomb Primary School account, which said: “Because the school is not failing. @GoLocalVoteJoe is a Conservative, the party that has destroyed education funding and that has hit @MoulsecoombSch hard!

“@Ofstednews measures deprivation not school performance. He’s never been to the school or spoken to parents. Absent today.”

Another campaigner, Kay Hunt said: “We asked you to join us today at our community event to speak with everyone but you didn’t turn up.

“Members of other parties did. Today was the best day for everyone as people have been working so hard in school, they don’t have any other spare time!”

Mr Miller was also challenged for his lack of understanding of life as a single parent, with two jobs and a child with special educational needs.

In his defence Mr Miller shared screen shots showing his effort to meet with campaigners and shared his own life experience.

He said: “I fully understand growing up with a single mum in a council house who had three/four jobs sometimes, and having lived in emergency b&b accommodation.

“There seemed to be a fair few reps there who could have met. Still happy to meet.”

Speaking about the Twitter discussions today (Friday 22 November) Mr Miller said: “I have tried to meet with representatives of the campaign.

“Not one of their group were able to meet at any point over a two week period. I wanted to listen to their concerns.

“By failing to even meet, it is clear they are just using the academisation as a political football, when academies in fact increase outcomes for pupils as displayed at BACA.

“For too long some of the most disadvantaged children in our city have not been reaching their full potential. I did not see protests outside the school for the years this went on.”

Following on from the Twitter storm Miss Hoffman said: “We as a group of parents feel actually insulted by Joe Miller comments that we should have protested when the school failed.

“This shows an utter lack of knowledge of and respect for the community, it’s views and needs.

“We’ve always been pro-active in talks and contact with the headmaster and staff over the last few years to improve outcomes for our children, which are mostly SEND children.”

“Moulsecoomb Primary School is a fantastic local school that we are all proud of, and it is already moving in the right direction since its last Ofsted inspection. It is enjoyed improving SATs results in both Year two and Year six.”

All candidates standing in Brighton Kemptown Constituency, which includes Moulsecoomb and Bevendean, are invited to speak at Education Question Time hosted at Moulsecoomb Primary School in The Highway, from 6pm on Tuesday 26 November.