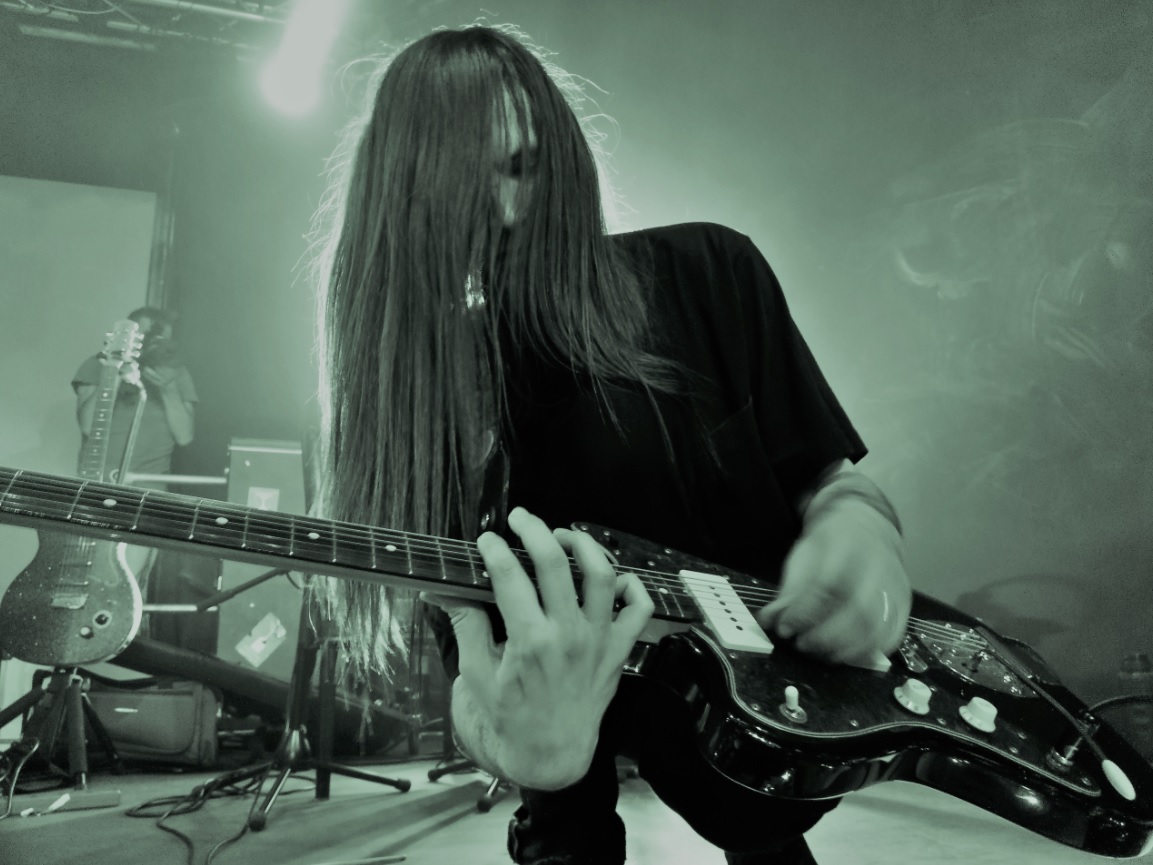 OK I hold my hands up, tonight will be my first ever Wire live gig! I know, “What was I thinking!”, right? I mean, the two people that I was standing with (photographer Guy and friend Helen) at the very front of the CHALK venue this evening, had previously witnessed them ten and five times respectively. Clearly I have been missing out on something! But in my defence, I have owned the first two Wire albums ‘Pink Flag’ from 1977 and ‘Chairs Missing’ from 1978 for a few years now. I just haven’t got around to seeing them perform in the flesh.

I obviously knew of them back in the day courtesy of their singles – 1978’s ‘I Am The Fly’ (which sadly does not get an airing tonight) and 1979’s ‘Outdoor Miner’ (which does). But after they initially called it a day in 1980, they just disappeared off of my radar. For those in the know will realise that Wire have reconvened on two other occasions, from 1985 to 1992 and then again from 1999 until the present.

Their first single was ‘Mannequin’/’Feeling Called Love’ and their first LP was the aforementioned groundbreaking ‘Pink Flag’, both unleashed in the heady days of 1977. Amazingly their highest ever official chart position was a lowly No.39 with their third album ‘154’ back in 1979. Their highest single position was not surprisingly with ‘Outdoor Miner’ also in 1979, when it peaked at No.51 on the singles chart.

Wire are clearly ‘one of those bands’ where they have been influential within the music business and are enjoyed within all the right circles, but have not earned the respected chart success. There are many bands down the years that have stood the test of time and are now considered legends and yet at the time they were just another act. This happens when artists are ahead of the game or away from the masses, at that moment in time. Wire are as I said ‘one of those bands’, just like The Fall and Gang Of Four, who have also shared obscure lyrical themes in their vast amount of work. It’s here that I must note that Gang Of Four lead guitarist Andy Gill had sadly passed away earlier today from pneumonia. He was a mere 64 years old. Younger than all three of Wire’s founding members here this evening. A sad loss to the music business. Thankfully I had seen Gang Of Four back in the day at this special concert – click HERE. 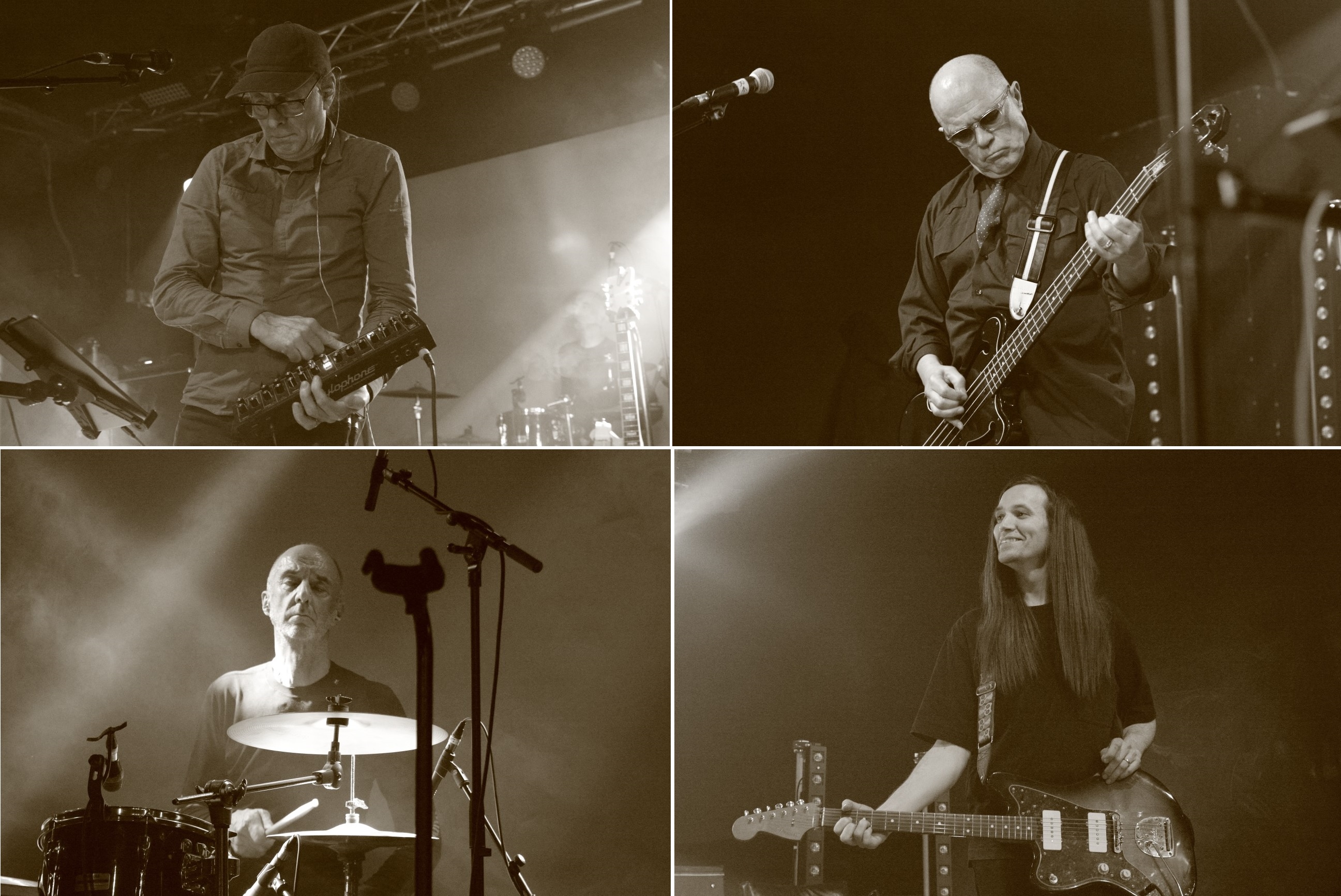 Tonight, we are very fortunate to have three of the founding members of Wire with us on stage – Colin Newman (65), Graham Lewis (66) and Robert Grey (68) aka Robert Gotobed. Sadly Bruce Gilbert departed in 2004. The ‘new boy’ in the lineup tonight is Matthew Simms, who initially was a guitarist on the 2010 ‘Red Barked Tree’ album tour, and subsequently morphed into the studio unit in 2013, for Wire’s ‘Change Becomes Us’ album.

This evening, Wire performed an 18 song 72 minute set, which commenced at 8:33pm and concluded at 9:45pm. Arguably not a massively long time to be on stage, considering the wealth of material they have released over the past 42 years, but there was a 10pm curfew. It might have been better if they had come on stage earlier and did not have a support artist, (more on him later), but then I guess that if you leave crowds wanting more, they will always come again. I was wondering whether Wire are one of those bands that don’t do encores, thankfully tonight they did.

The quartet took to the chic lengthy CHALK stage with no fuss whatsoever. Here is a no nonsense act that has come to perform for us and not to shower us with idle banter, such as “Yayyy Brighton it’s truly fab to be here, we’ve always wanted to play this venue….blah blah blah”. It’s not their style. I notice that frontman Newman didn’t rush or get stressed when having to change between guitar and fancy Stylophone. He quietly went about his business. Mind you arguably not as quietly as drummer Gilbert, who was living up to his former stage name, ‘Gotobed’ and sat there most of the time with his eyes shut. Maaan how relaxed can you get at a gig? Whereas long-haired new boy Simms, was the only one giving it a bit of welly, as he flitted between his collection of no less than 17 guitar foot pedals.

Wire are arguably a cult band, but they seem to span across many generations with their fans gathered here tonight. There are late teens, a few Goth’s, civil servants and probably retired people. All of which were standing gazing in awe at the musicians in front of them on the raised stage. The set started relatively sedately for the first three tracks ‘The Offer’, ‘Be Like Them’ and ‘1st Fast’, but then the tempo picked up with Wire’s fourth single ‘A Question Of Degree’ from 1979. This gave the punters the option to bop or wiggle their legs.

Having studied the two setlists below, the left one being Newman’s and the right one being Simms, you can see that songs 4 and 5 are in different orders! So can anyone confirm whether ‘Morning Bell’ or ‘A Question Of Degree’ was played first? Newman did not introduce any of the tracks on the night, other than stating that it was only going to be the seventh ever time that they were going to be performing this track….which turned out to be ‘Outdoor Miner’. Oh my God we ARE honoured! Although, I have found it listed for seven previous Wire gig’s and so tonight was actually the eighth time. For those completists amongst us, the previous outings being:
1. Winter Gardens, Penzance – 17th October 1978
2. Meltdown Festival, Royal Festival Hall, London – 18th June 2011
3. Fleece, Bristol – 27th January 2020
4. Band on the Wall, Manchester – 28th January 2020
5. Hare and Hounds, Birmingham – 29th January 2020
6. G2, Glasgow – 30th January 2020
7. Brudenell Social Club, Leeds – 31st January 2020 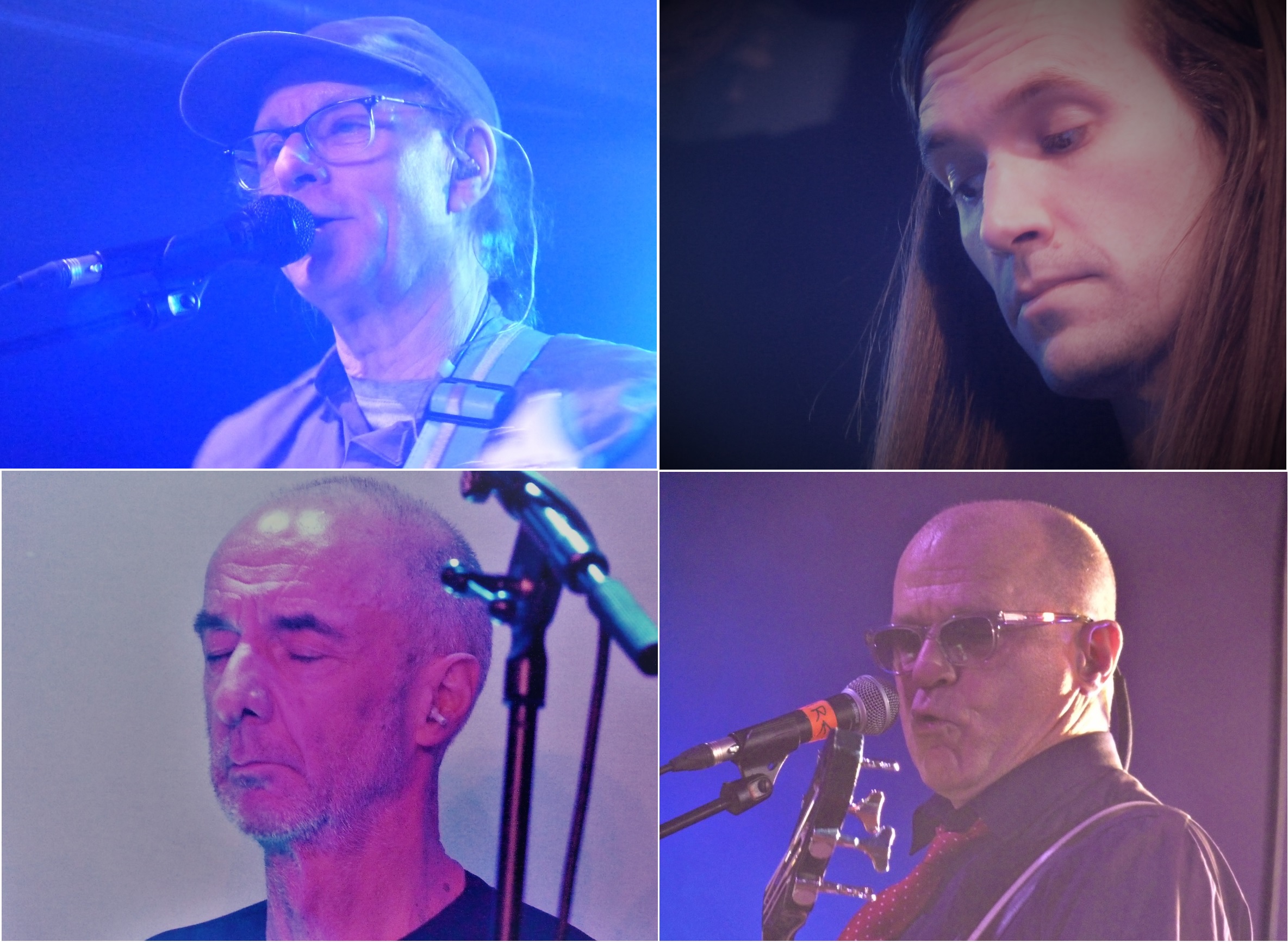 I tell you what I do know, is that track 6 tonight was ‘Cactused’, which can be found on the brand new 2020 ‘Mind Hive’ album, and that this was most certainly the best track tonight. So the future’s looking bright for Wire if after all this time they are unleashing corkers like this! Also check out ‘Unrepentant’ on the same album.

The quirky post punk ditties continued and on occasion bassist Lewis took over the vocals duties, including the shouty ‘Oklahoma’. I was by now seriously lapping it up and was even firmly resting my hands on the speaker in front of me in order to also ‘feel’ the music. Newman exchanged his guitar for a fancy stylophone for the penultimate track ‘Former Airline’. This jump on the keyboards shouldn’t really be that much of a surprise as Brighton based Newman is half of the Immersion duo with his wife Malka Spigel. The Brighton & Hove News reviewed a recent performance by them – read it HERE.

It’s now 9:45pm and that my friends is the end of my premier Wire concert and the last date of their six-date UK tour. God I hope that there will be more of them in the future! 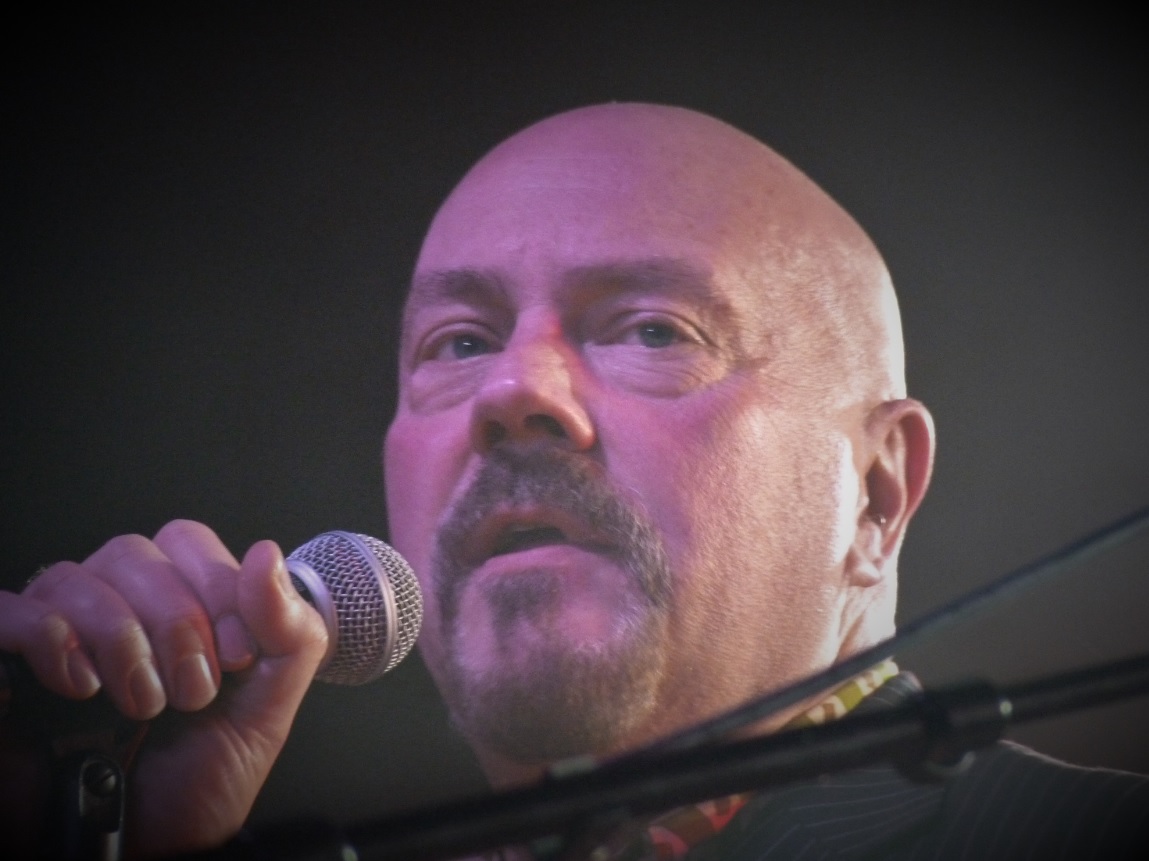 Support this evening came from 55-year old Blackburn born Brighton based jack of all trades Graham Duff. A man who has had his finger in many pies during his time, from being a scriptwriter, director, producer, script editor and author, who has created a wealth of work for TV, radio, stage and publication.

This evening it was just him, a microphone, and a copy of his 2019 published book ‘Foreground Music – A Life In 15 Gigs’, from which he read certain extracts for around 20-25 minutes. He started by referring to his first ever concert at age 10, which was a Cliff Richard gospel bash (poor sod), but then regains his credibility by discussing an ill fated Joy Division concert he attended where Ian Curtis was very unwell and the band had to call on the assistance of other Factory Record labelmates who were present, but there was a riot. I think this might have been at the Derby Hall, Bury on Tuesday 8th April 1980. Having been a Joy Division fan for 40 years, I found this the most interesting tale from his ‘set’. Duff went onto discuss his Velvet Underground gig experience as well as his several pub-crawls with Mark E. Smith of The Fall.

This was a strange choice of support, if you could call it that. But I listened to him as he stated that he had been an assistant editor at Ikon, the video department of Manchester’s Factory Records, and having purchased the bootleg style Joy Division ‘Here Are The Young Men’ video cassette released by Ikon in 1982, I gave Duff the benefit of the doubt. He wouldn’t have cared a toss if I did or didn’t anyway. 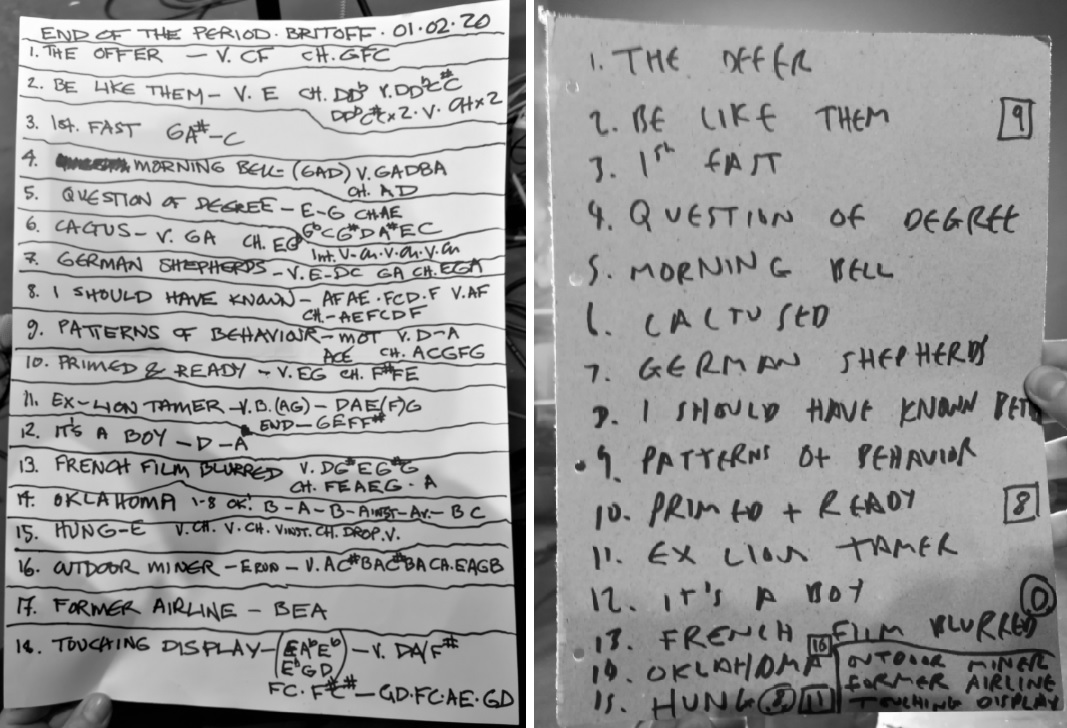