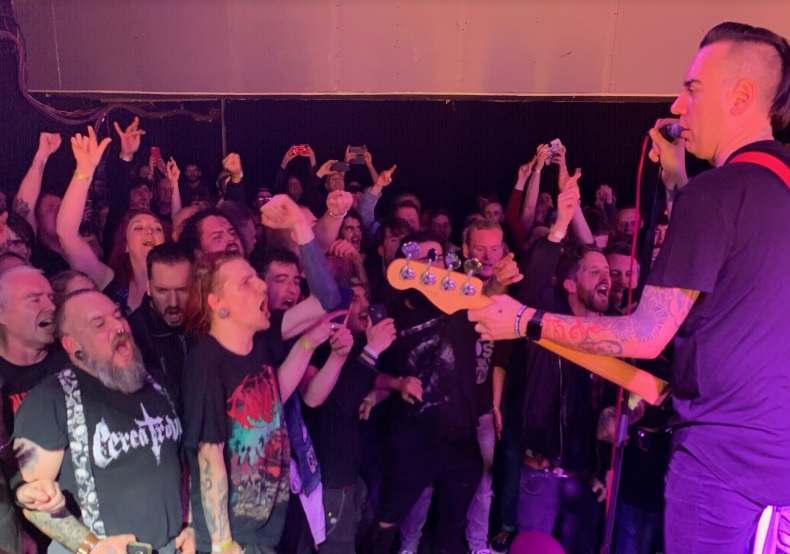 I made my way into Brighton not knowing what to expect tonight. I had vague recollections of ‘Anti-Flag’ and ‘The Creepshow’ and have seen ‘Maid Of Ace’ a couple of times before, so I knew they were great. I arrived at the venue early and there was a large crowd already queuing to get in. A great sign of what was to come.

I talked to people around me in the queue and most were younger than myself and explained that they had followed Anti-Flag since late 1988 through till now. Some were there to see ‘The Creepshow’ and some for ‘Maid Of Ace’. Altogether a great lineup.

Once in the venue you could feel the excitement from everyone. It was my first time in the new CHALK venue formally ‘The Haunt’, it looks great. I made my way over to the stage door and was lucky to meet Anti-Flags drummer ‘Pat Thetic’, one of the two original members of the band. We chatted and he explained that the band loves Brighton and always play here on their tour and were charged for tonight. He also mentioned what great support bands they had for the UK dates. The whole band was looking forward to this date in particular. The Anti-Flag tour is over 7 counties and 43 dates and coincides with the release of their new album ‘20/20 Vision’, released on the 17th of January 2020. More info HERE. 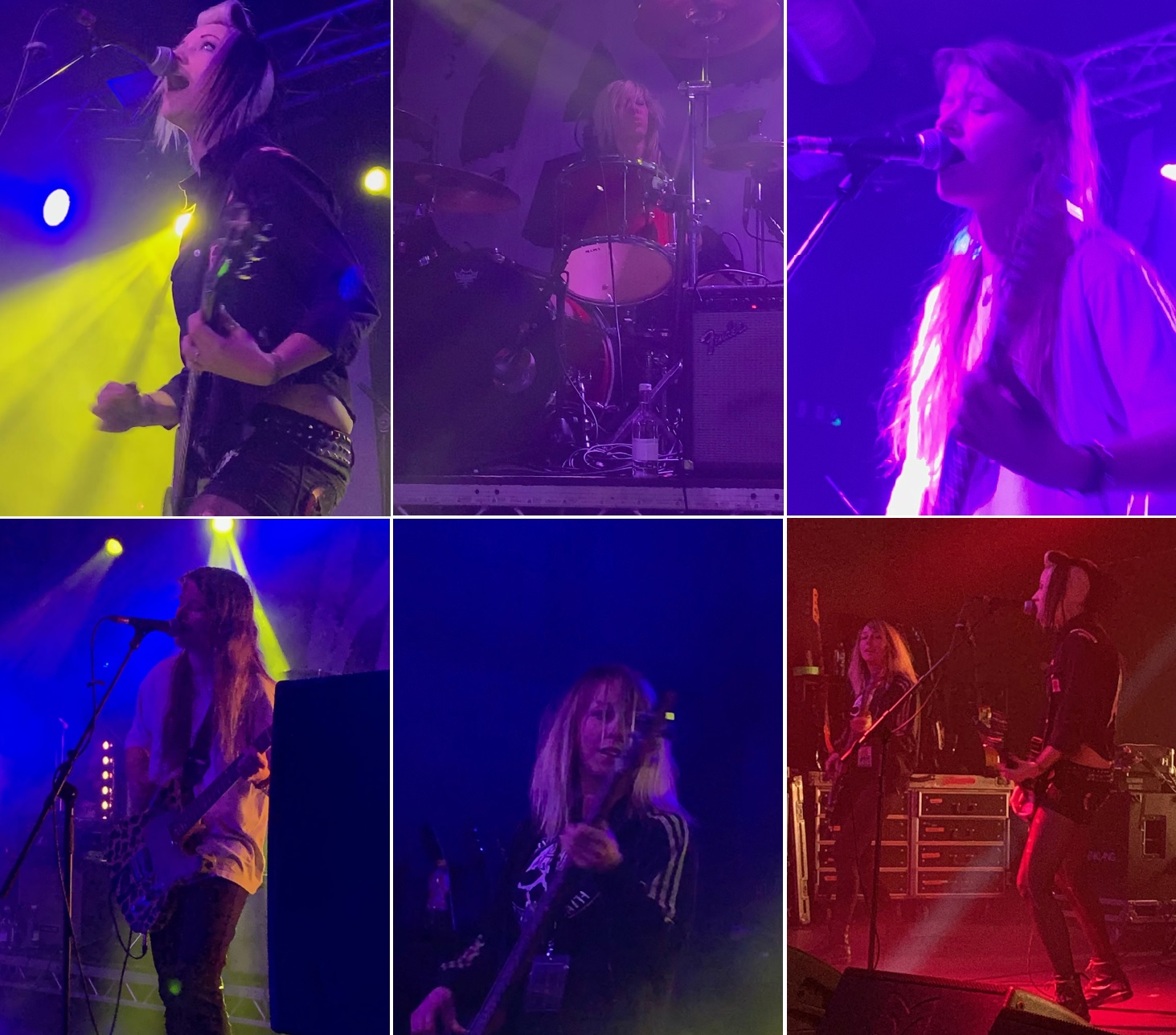 First up tonight Maid Of Ace which consists of four sisters from Hastings, which is where I first saw them. They deliver adrenaline-fuelled Punk-Rock and appeared at Glastonbury in 2015. The band are; Alison Cara Elliott (lead vocals/guitar), Anna Coral Elliott (guitar/vocals), Amy Catherine Elliott (bass/vocals) and Abby Charlotte Elliott (drums). They formed in 2005, but got serious about their music in 2012. Their debut album ‘Maid Of Ace’ was self-released in 2014, and followed by another self-release ‘Maid In England’ in 2016. This album made it to No 9 In Vive Le Rock Magazines ‘Top 50 Albums of 2016’. Grab your albums HERE.

They made their way onto the stage to great cheers from the audience and boy did they kick this Sunday evening off with their first ‘Intro’! Next up ‘Stay Away’, one of my favourites. The crowd were loving it and the band were too. All I could think was wow. Next up ‘Hollywood Rain’, Someone next to me said “I hope they have a merch stall”.

The crowd were now well into this with a mosh formed up the front. The sound in this venue is awesome and when it is that good, it always makes for an outstanding gig. Next ‘Disaster Of Noise’. I was thinking that this is the first support act and there is so much more to come. These sisters sure know how to blow the roof off and the whole venue was right there with them. Next up ‘Boring’ and they just kept on coming. The whole performance was fast, frantic and they absolutely smashed it. I know they gained a whole new set of fans Sunday night and there will be a lot more before the tour is over. Their set finished with ‘Bone Deth’ which has over 1.3 million views on YouTube. 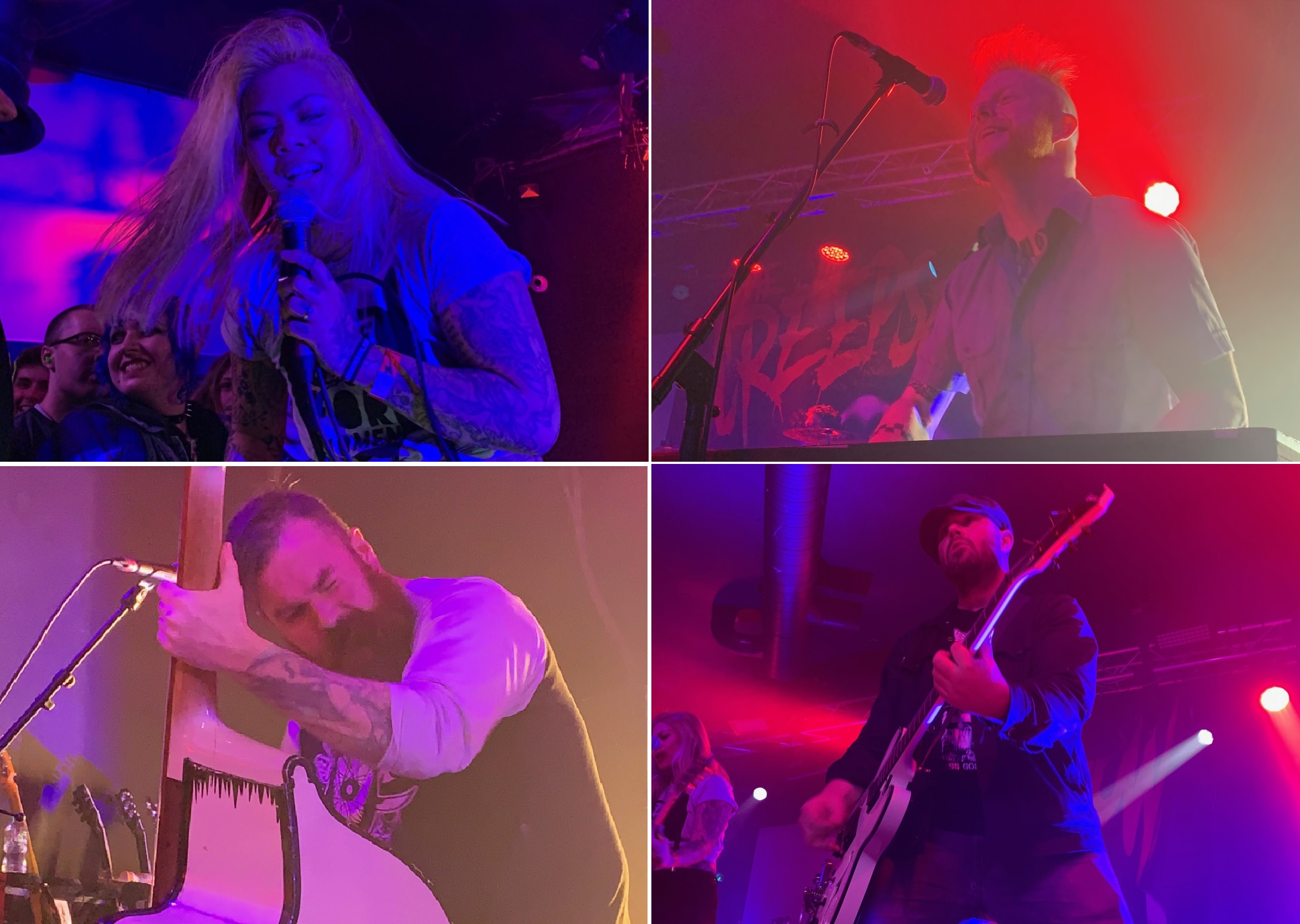 Next up was The Creepshow who hail from Montreal in Canada. The band describe themselves as “smashing the whole damn world in the face with their brutaltastic mélange of punk, country, psychobilly and good old-fashioned rock n’ roll”. They formed over 12 years ago and their first album; ‘Sell Your Soul’ was released in 2006 to loud acclaim from the Psychobilly and Punk scene. Since then also releasing ‘Run For Your Life’ (2008 Epitaph/Stomp), ‘They All Fall Down’ (2010), ‘Life After Death’ (2013) and the most recent album ‘Death At My Door’; released in September 2017, described as 10 tracks of raging, bloodcurdling and raucously rebellious fury. The band are; Sean “Sickboy” McNab (upright bass/backing vocals), KENDA! (guitar/lead vocals), The Reverend McGinty (keyboard/backing vocals), Sandro Sanchioni (drums) and Chuck Coles (guitar).

They arrived on stage tonight to great applause from the crowd, many that had tickets just to see them. The set kicked off with ‘See You In Hell’ and the crowd kicked off with a great cheer and the mosh pit soon became frantic. The sound of that twirling double bass is awesome and the Psychobilly drumbeat lifting everyone in the place, a great start to their set. Kenda has a smoky voice and is a great performer, flying around the stage with her guitar. Reverend McGinty bashing those keys and really giving it some on the backing vocals. Really enjoying this. The crowd all sang along too.

Next up ‘Born To Lose’ and then an obvious fan favourite ‘Creatures Of The Night’. An already energetic mosh just got bigger. The next two songs and for me my songs of the set ‘Run For Your Life’ and ‘Rue Morgue Radio’, just brilliant and I wondered why I hadn’t heard this band’s material before. Some of the songs are like anthems and all the crowd sing along. The atmosphere was incredible, and I can see why Anti-Flag tour with them on a regular basis. The set finished with ‘Get What’s Comin’ and the band left the stage to huge applause from their die-hard fans and those like me that have just become one. Wow what a second band for tonight!

A family near me in the crowd, dad and two daughters, really enjoyed this and told me later that The Creepshow is one their favourite bands ever! Kenda made their day, when they met her later at the merch stall. The Reverend also offered us all seats on their tour bus back to Canada! 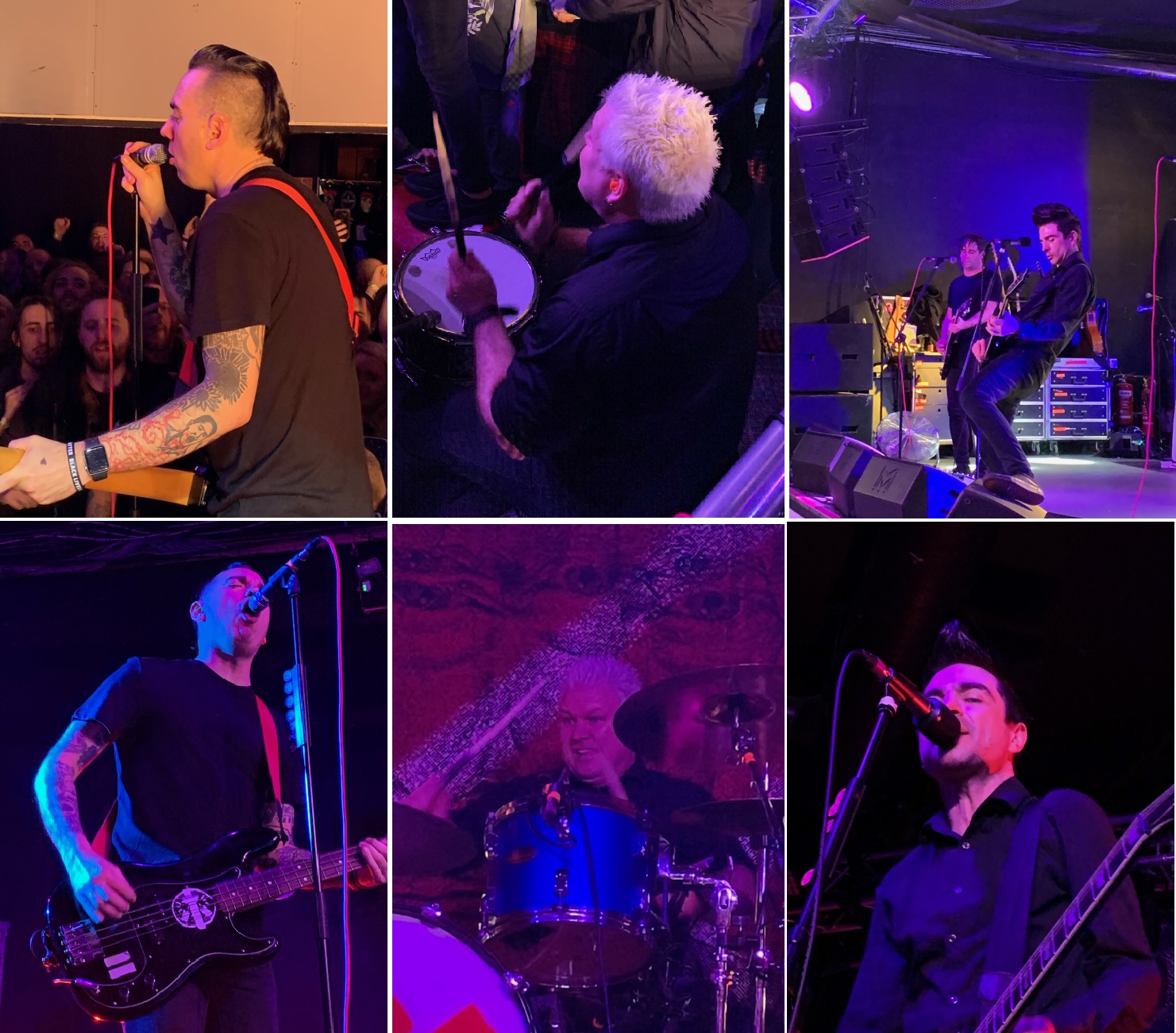 Now to the Headliners Anti-Flag. They are an American punk rock outfit from Pittsburgh, Pennsylvania. The band gained notoriety for songs with politically charged lyrics and activism. They have a passion for equality and human rights. The line-up is; Justin Sane (vocals/guitar), Pat Thetic (drums), who founded the band together, Chris Head (guitar) and Chris Barker (vocals/bass) (Chris #2). Justin Sane and drummer Pat Thetic first formed the band in 1988, but it wasn’t until 1996 that the band released their first album, ‘Die For The Government’. Since then their output has amounted to 12 studio albums, the most recent being ‘20/20 Vision’. I personally, had heard some Anti-Flag before back in the 90’s, but hadn’t followed them like some of the crowd here tonight. I was looking forward to this.

The band entered the stage and the crowd gave out a huge cheer. The venue was packed, and you could feel the anticipation. What was to come was epic and I have to say was a cracking performance by an awesome band of truly brilliant musicians.

First up was ‘Christian’, I was mesmerised by how fast and tight the band are. Fast brilliant punk rock with an individual sound that not all bands achieve, Justin Sane upfront really giving it some. I already knew we were in for a treat tonight. Second song ‘Turncoat’, then ‘Fabled’. The mosh has now expanded considerably. The crowd is such a mixture of ages and nationalities. The popularity of this band is vast, with people having travelled from other counties to be here tonight. 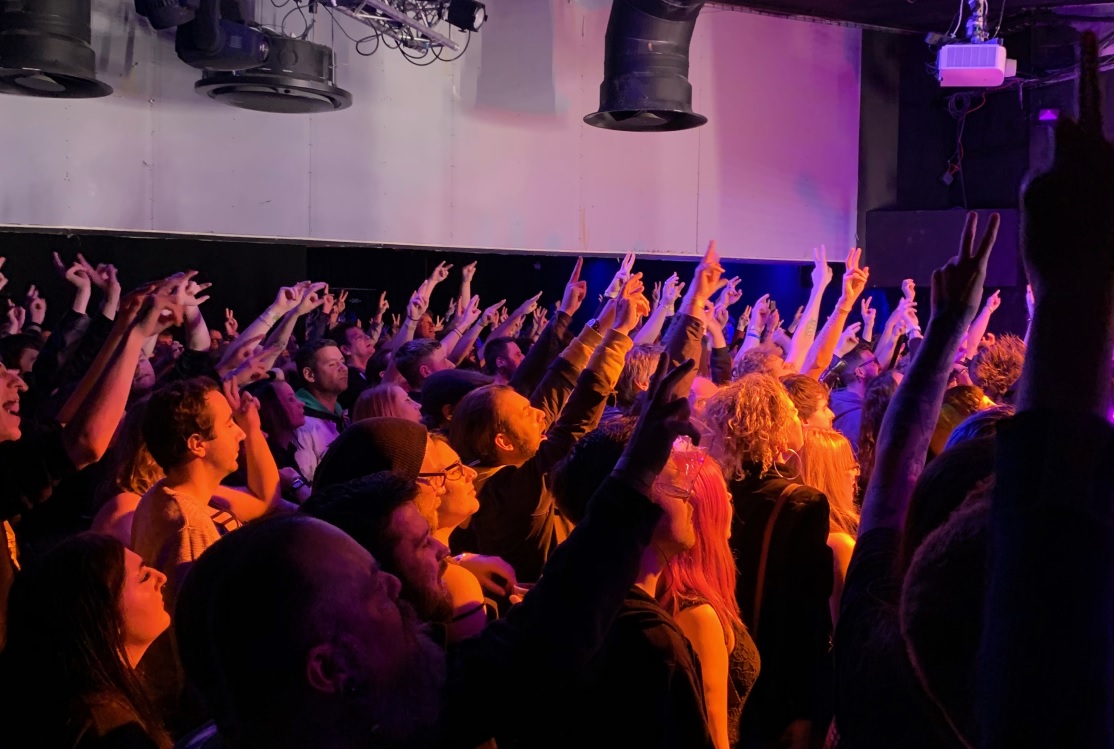 The crowd are up for it tonight! (pic Mark Kite)

Next up ‘Trouble’, this really got the singing started with arms in the air pointing at the band. A few more songs in and then ‘The Smartest Bomb’ which was cracking. At one point the band got the crowd to open a circle in the middle of the floor and a circular mosh formed and went round and round, a real spectacle to behold. Throughout the set the band talked about equality and the world and that it is not those in government that hold the power and it is us that have the power and we send it up. We need to take action to save our planet.

The songs kept on coming and the crowd absolutely loved it. After the band performed ‘Brandenburg’, Pat Hectic and Chris #2 took the drums, mic and guitar and went into the middle of the floor and played in the crowd, this was something to be seen! I enjoyed the whole set and the highlights for me were ‘The End’ and ‘Die For Government’. Their songs are like anthems and I loved every minute. It all went so quickly, and I wanted more.

What a brilliant evening with all bands smashing it and making it an off the scale gig. If you didn’t get to see them there are still a few UK dates left.
More data on Anti-Flag can be found on their official website – www.anti-flag.com 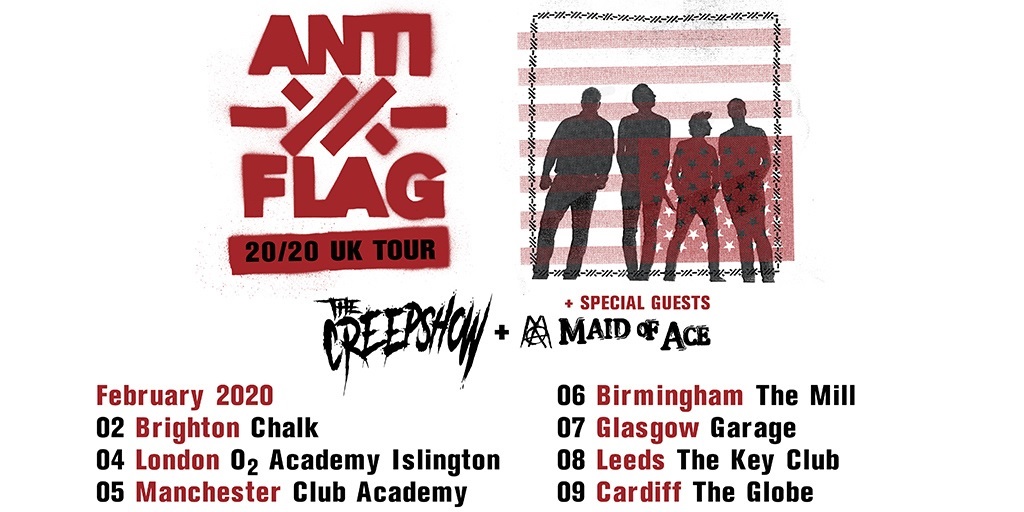