The Rossi Bar gets sweaty with Wife Swap USA 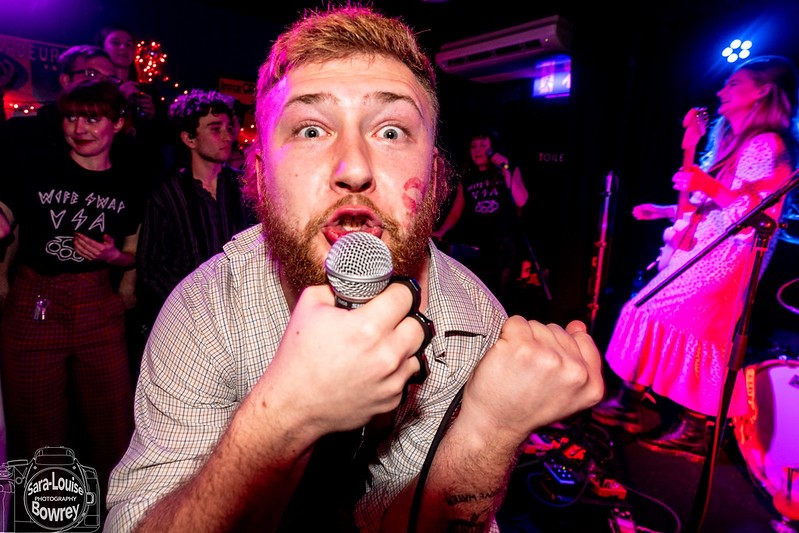 This particular Saturday night in Brighton was most certainly buzzing! Seems that concert folk weren’t caring one iota about an impending storm, they were going to go out in the town and have fun! Thus the Brighton & Hove News Music Team endeavoured to capture as much of the ‘goings on’ as possible. We were here, there and everywhere! 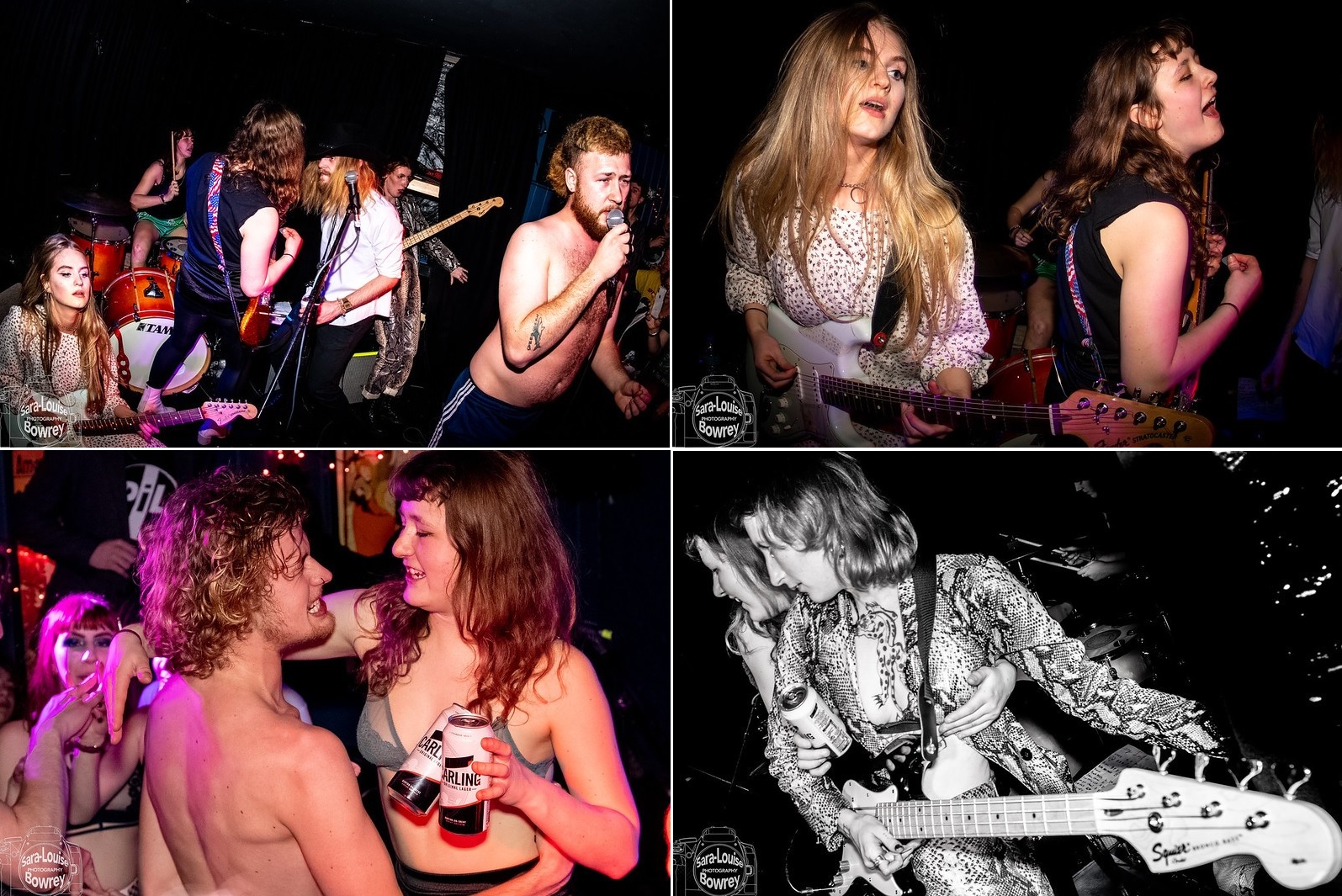 It was about time that I finally opened up my gig account at The Rossi Bar located at 8 Queens Road, Brighton. This is a compact establishment and reasonably easy to miss, but it is located just a few doors down from The Hope & Ruin towards the Clock Tower. Tonight the venue was hosting the fourth ever gig by Brighton’s very own Wife Swap USA. Thankfully I had been fortunate in catching this sextet’s debut concert up a few doors at the aforementioned Hope & Ruin on 6th December last year. They blew the roof off and sold out the venue (read our review HERE). I wanted more shenanigans from this new young Brighton band and this evening was my opportunity.

Turns out the word ‘shenanigans’ (meaning “silly or high-spirited behaviour; mischief”) would be the most appropriate word in the whole of the English Dictionary to describe the events of this evening. The longer the 60 capacity venue paaaarty went on, the more fun was had! It was going to be ‘one of those nights!’.

There were no less than 4 bands performing in The Rossi Bar basement tonight. It’s just one large lounge size room with a toilet to the rear and a stage in the corner that can just about accommodate three or four people. 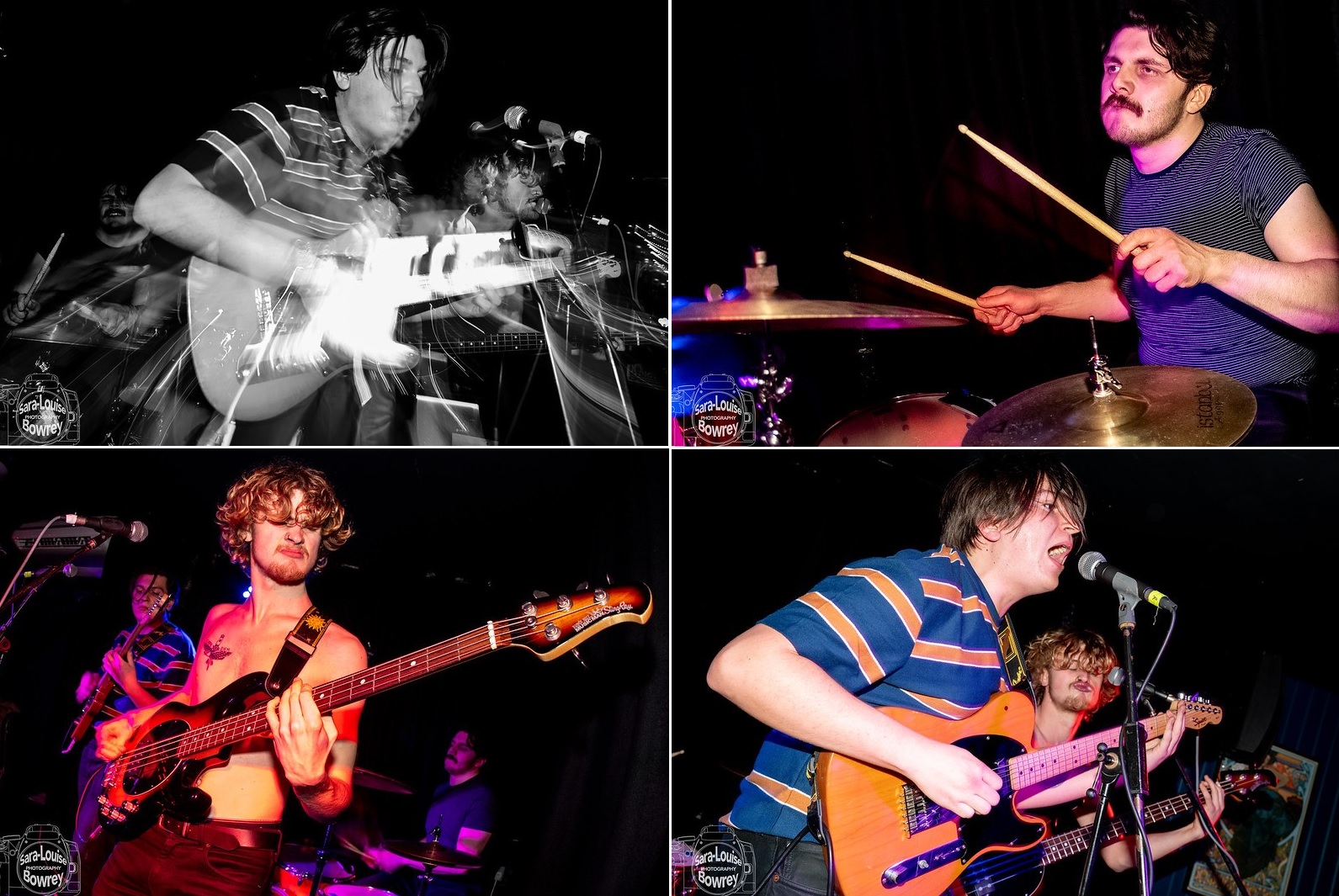 First up were a trio of Brighton based lads going by the name Monakis. The lads being James Porter (bass/vox), Aaron Butler (guitar/vox) and Joe Mctaggart (drums). They squeezed onto the stage and then BANG! They hit us with their debut single release ‘Animosity’. Holy f*ck these are awesome! Right from the very off we were treated to traditional punk rock meets IDLES. Vocals were served with a Cockney (Rejects) twang during their very enjoyable seven song set.

Vocal duties were shared amongst the guys and this brash young fun band played with must bravado and yet, just like tonight’s headliners, this was only their fourth gig. This is exactly the sound that folks are looking out for at the moment – a modern take on punk. In following the steps of aforementioned IDLES and Fontaines D.C, Thumper, Ditz, BlackWaters and Wife Swap USA. Myself and my learned colleague Jordan Mooney instantly fell in love with these guys! Praise indeed! We must see them live as soon as possible. They are endeavouring to organise a local appearance on 1st March, so keep an eye on the link below for further details. It was totally worth coming out this evening just to see Monakis. This band is a must! No two ways about it! 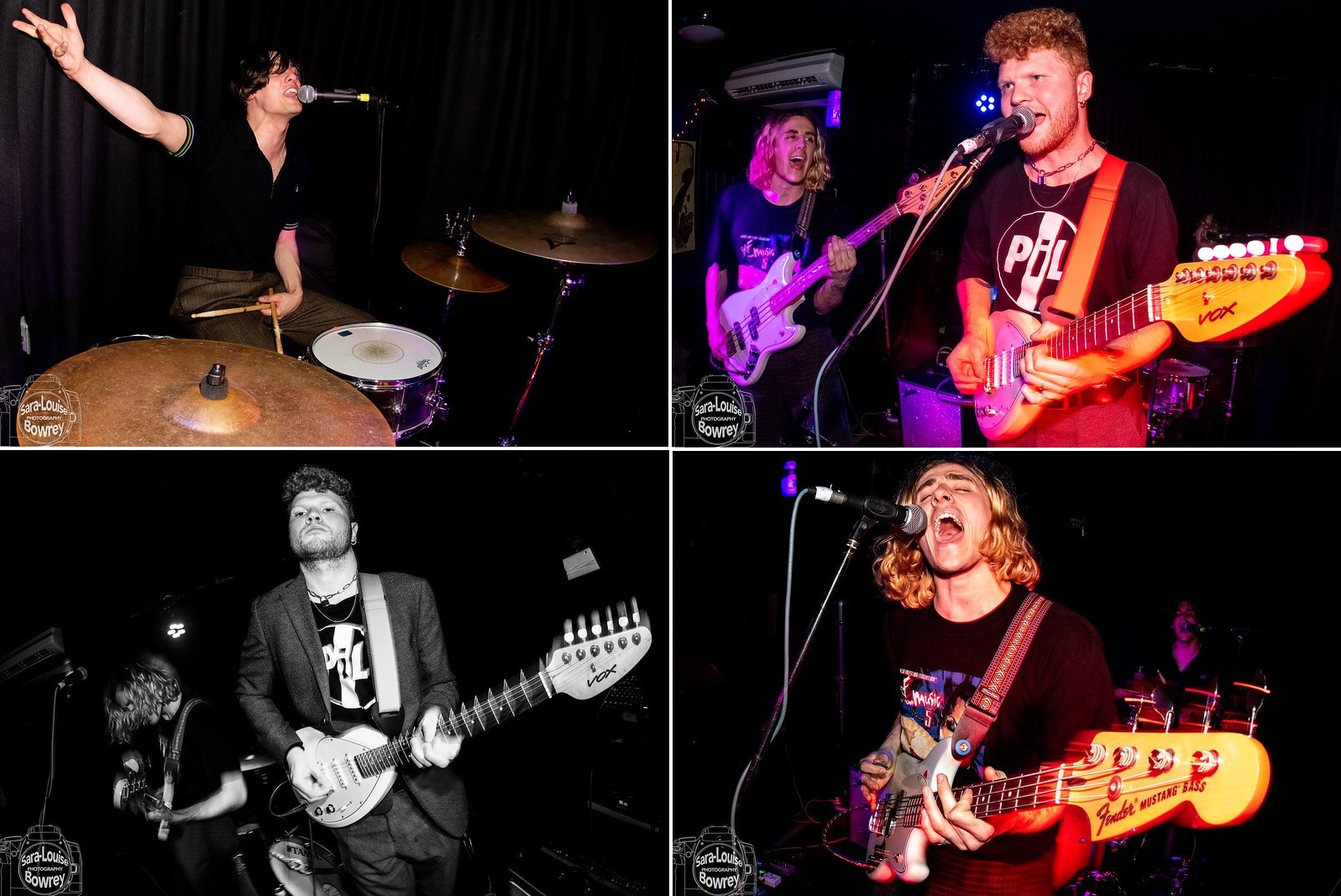 Next up were Pin Ups, who were also an all guy trio. The members are Josh Gibbs (guitar/vox), Louis Baker (bass/vox) and Jesse Baker (drums/vox). I was particularly impressed to learn that they had travelled down from Norwich to play for us tonight, and in some cases had only grabbed an hours sleep – ahhhh the rock’n’roll lifestyle.

They performed an 8 tune set, once again with shared vocals. They were for want of a better word more ‘melodic’ than the previous act and describe themselves as “wonk rock”. To me they would go down as a post punk trio that God Almighty, aka John Peel would have enjoyed. They have that jangly guitar sound – nice white guitar by the way – which would have gone down as new wave and at times reminded me of The Vapors.

The best track of theirs was sung by drummer Jesse who bellowed “Put your phone down” and very much reminded me of Johnny Thunders & The Heartbreakers. I’m not sure if this was ‘Fly On The Wall’ or ‘Flattery Acid’. I’m sure someone knows! They went on to do their rendition of slowthai’s ‘Doorman’ and finished with their latest single, ‘Lazy’, which saw Jesse go hell for leather on his drumkit. Jordan was most impressed by this!

Pin Ups setlist:
‘Intro’
‘Do You Hate Yourself Yet?’
‘You Make Me Feel So Sick’
‘Lunchtime’
‘Fly On The Wall’
‘Flattery Acid’
‘Doorman’ (slowthai cover)
‘Lazy’ 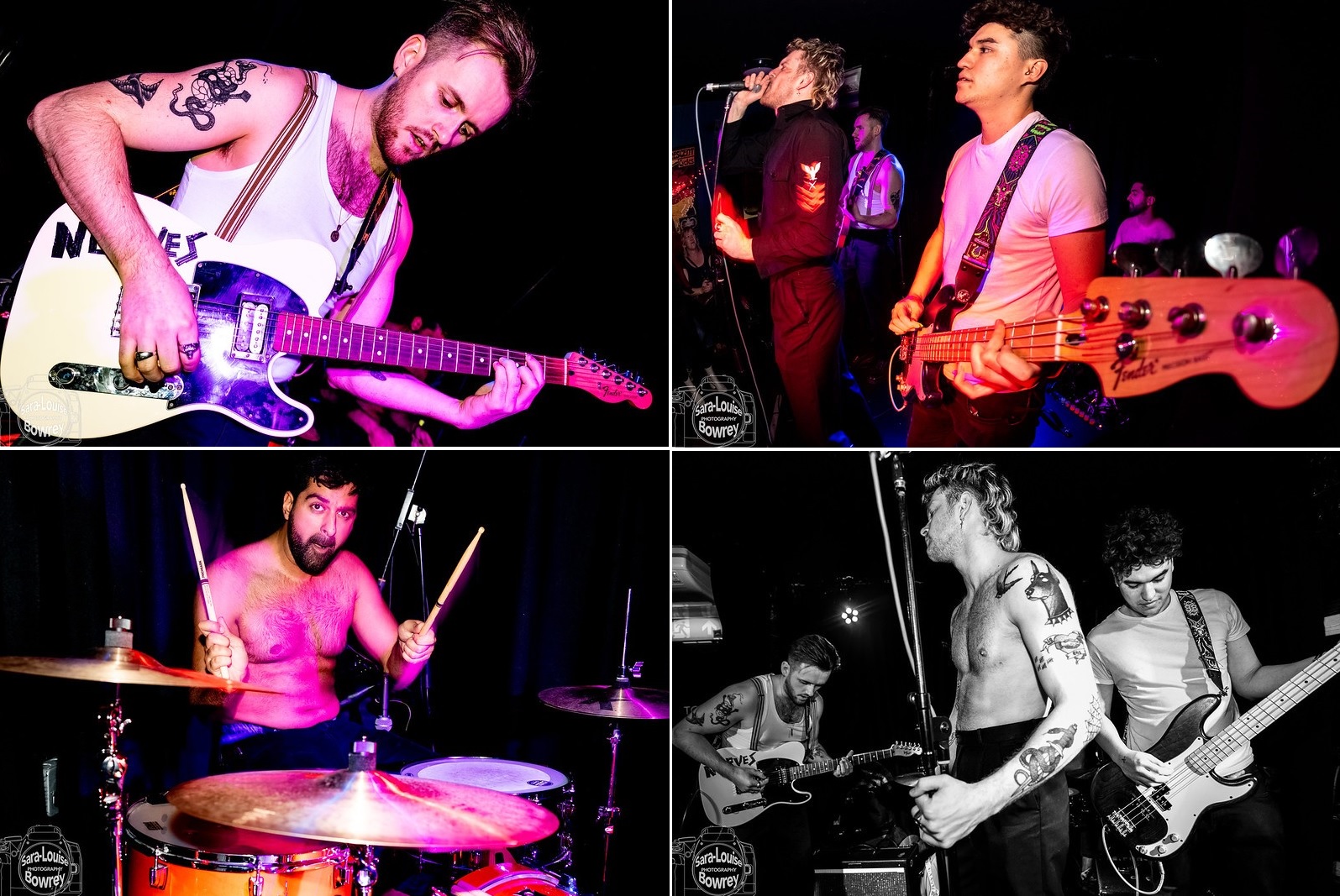 Here is a band that simply does not do sub three minute belters, hence they only performed a handful of numbers during their set tonight for us. The opener ‘Brass Knuckles’ has a shouty vocal style, combined with an almost swirling Arabic beat. Vocalist Jack E took his smart blazer off to reveal an enormous ‘Blue Peter Badge’ style tattoo on his back. He kept his ‘Saturday Night Fever’ style trousers on, and boy can he whistle loudly. He won random comment of the night award by announcing “Don’t abuse your gums!” after taking a sip from a mystery drink.

The sound mix didn’t feel quite right and we could have done with Mike’s bass being higher in the mix. Josh’s drumming was a joy to watch. Their unusual style reminded me at times of The Cure, Sisters Of Mercy and Clan Of Xymox, when listening to Jack C’s guitar-work. The longer their set went on for, the better they got. ‘Town With No Name’ was a highlight, even if it is about Aldershot, but for the first time proper we could clearly hear Mike’s bass playing, and I was stood right in front of him. The only strange thing I guess was that their tunes tended to fade out at the end. Their teeth grinding new single ‘Bruxism’ got an airing this evening too. 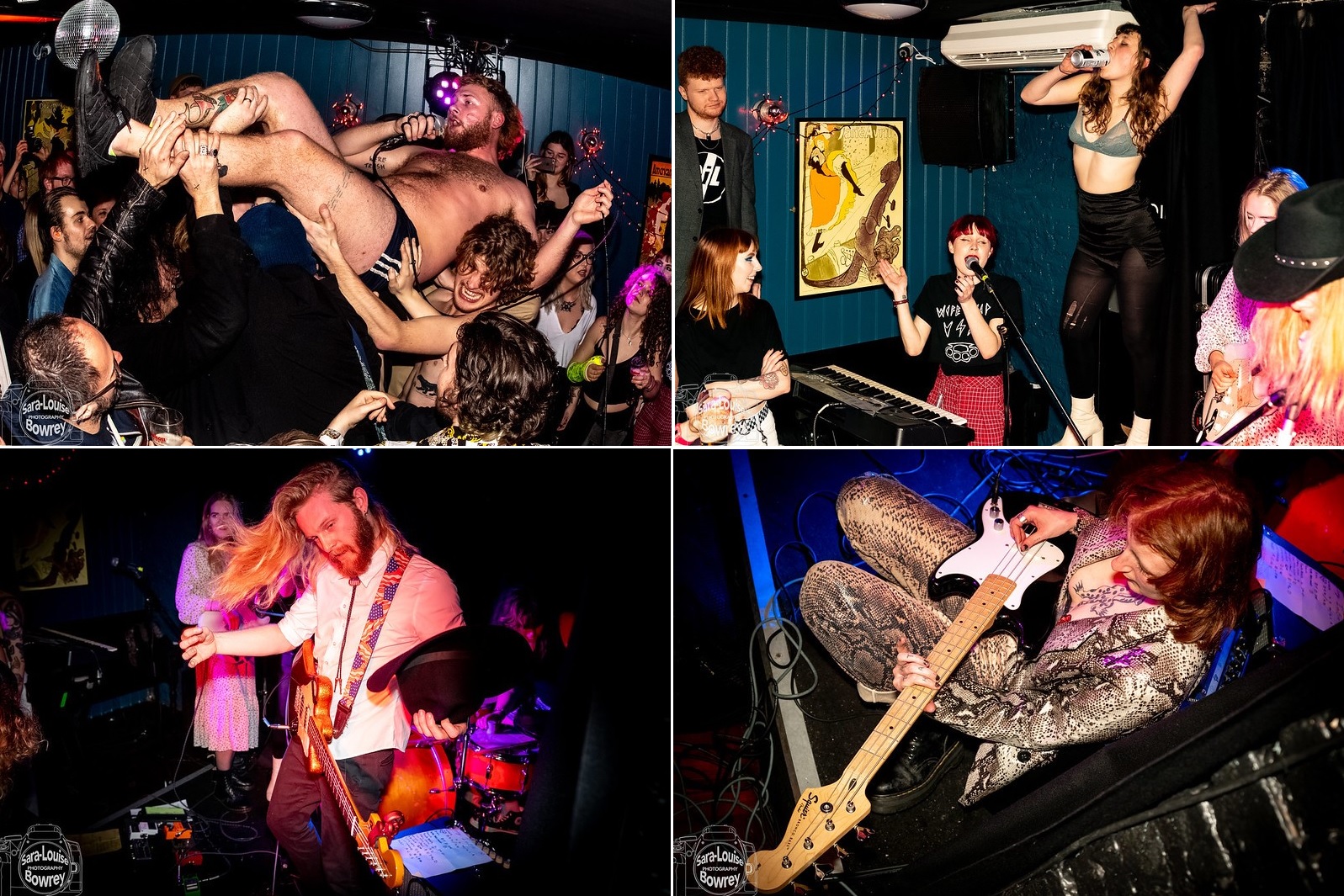 It was now time for this evening’s headliners to grace the stage or more accurately for half of them, stand by the stage, as there are no less than six members of Wife Swap USA. The vastly differently dressed unit consists of Harry (vocals), Kim (bass), Leila (lead guitar), Matt (rhythm guitar), Phoebe (keys) and Annabel on drums, who interestingly also plays bass for Swanmeat. Yes they were rather cramped and being at the front I was nearly wearing Kim’s bass. This was becoming more of a strong possibility the longer their set went on, the more her friends poured wine and lager down her throat, once at the same time. Suffice to say Kim this evening was Sid Vicious, there but not really.

Our modern day Village People (if you catch my drift, visually not musically) are a stoked posse. So if you are rather partial to fast punk, IDLES, Fontaines DC, Thumper, Rotten Foxes and the like, then Wife Swap USA are most certainly for you.

This evening during their fourteen track set, things were quite a bit chaotic, whether they were meant to be or not, doesn’t really matter. The main thing was did everyone present have fun? Yes they did! Did some take their tops off? Yes they did? Did some amazingly get hoisted above the crowd and paraded around the room? Yes Harry and bless her Kim did. Did Phoebe stand up high and play the keyboards at times with her foot? Yes she did?

Highlights for me were the mullet rock anthem ‘I Don’t Wanna Work In A Bar Anymore’, the surfs up ‘Sniffing USA’ and the outright punk ‘I Wanna Play In A Punk Rock Band’.

Wife Swap USA are currently organising a few more gigs around Brighton and beyond, but one unmissable one will be at The Prince Albert on Friday 21st February, when they will be supporting ‘the band of the moment’ DITZ. Now that’s going to be a most memorable evening! Grab your tickets HERE.

Wife Swap USA setlist:
‘Sloths On The Run Instrumental’
‘Too Sad To W*nk’
‘I Love The Pub’
‘You’ve Been At The Bins’
‘I Don’t Wanna Work In A Bar Anymore’
‘Tuaca On A Stick’ / ‘May Time’
‘I Wanna Play In A Punk Rock Band’
‘Snowstorm’
‘Sniffing USA’
‘Wagon Wheel’
‘Lipstick’
‘I Lost My Virginity’
‘CATSNAKE’
‘Mullet Envy’ 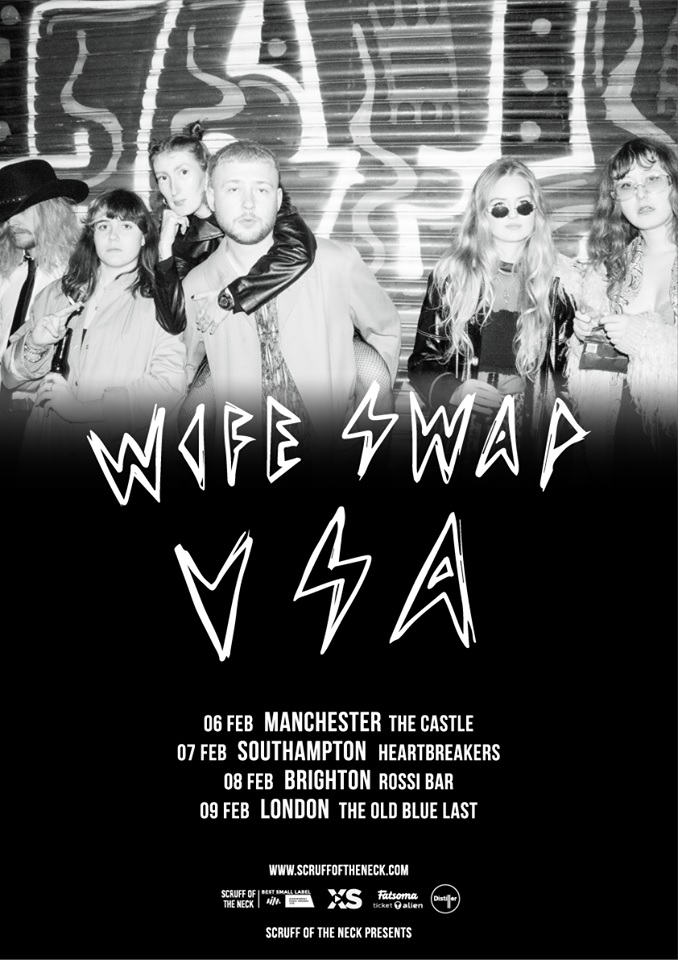 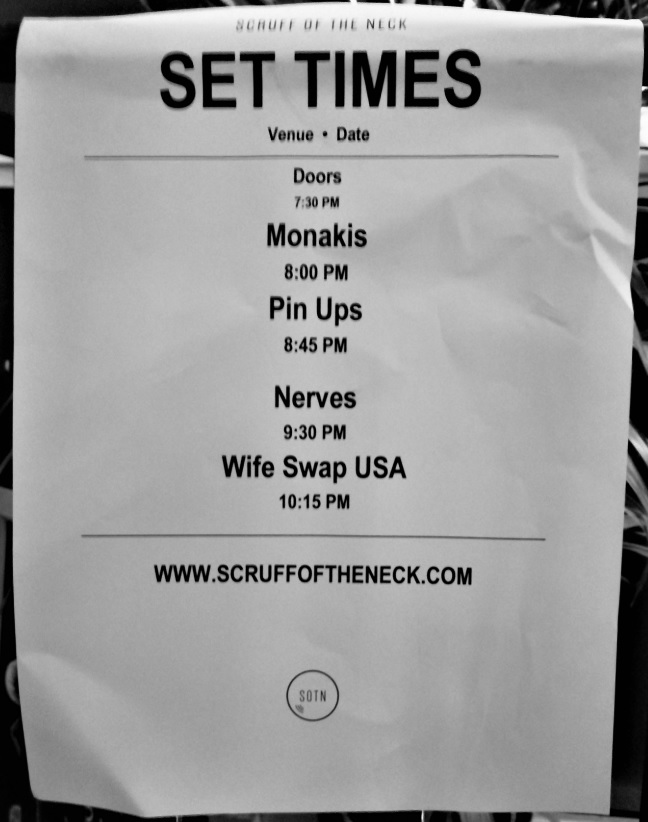