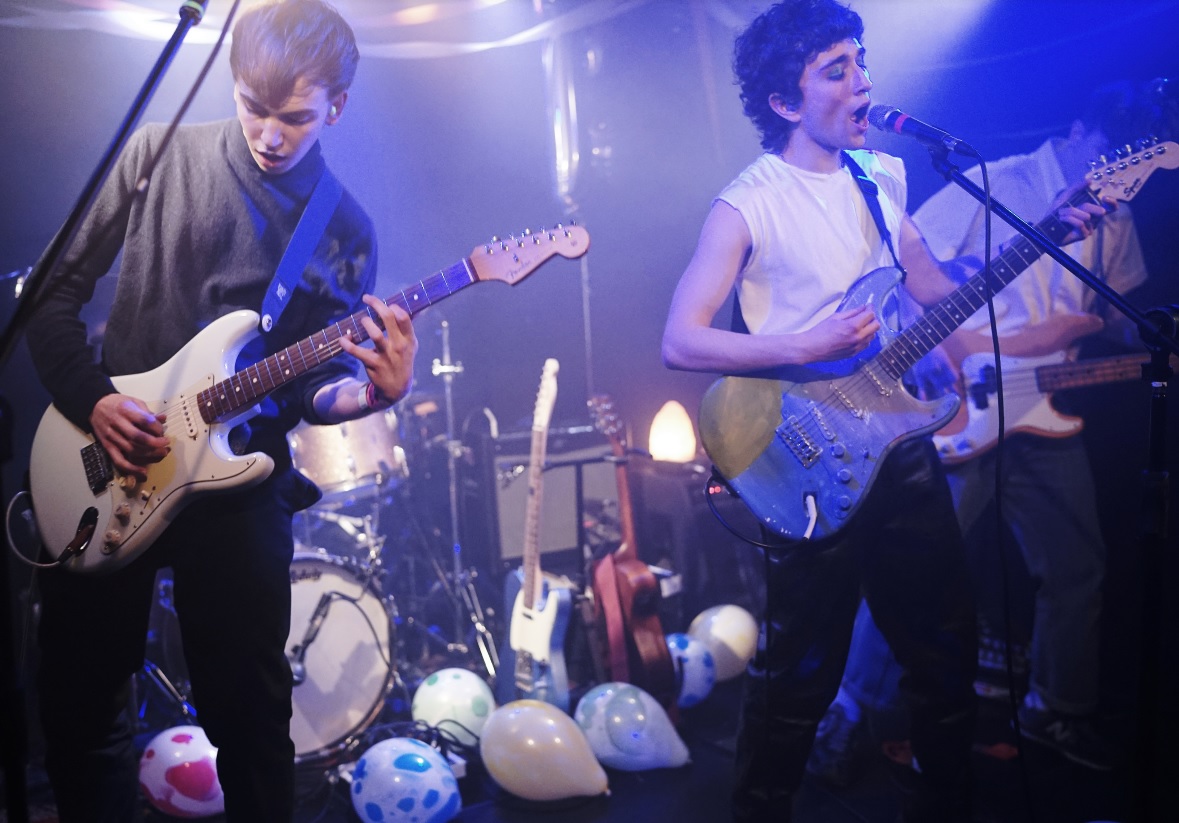 Brighton based indie-pop quartet Lacuna Bloome are a youthful bunch of lads who are certainly no strangers to the Brighton & Hove News Music Team. We have had the joy of witnessing them perform live in Brighton on several occasions – read one of our reviews HERE.

Founder members Niall (vocals/guitar) and Sam (guitar) relocated to Brighton as they knew that it was the right place to be and on their journey here they recruited musicians on the way, with the current being drummer Noah and new boy bassist Zac, who has picked up from where aquamarine haired Molly Walker left off.

Lacuna Bloome have in my opinion successfully filled the void vacated by the early sounds of The RPMs. Their sound is a pleasant blend of all things Oasis, the Stone Roses and The Primitives. But this evening at the darkened Komedia Studio both myself and our photographer Mike agreed that this time around Lacuna Bloome has a more established sound. They are moving in the right direction. Even their image is looking sharper, in amongst the balloons on stage. 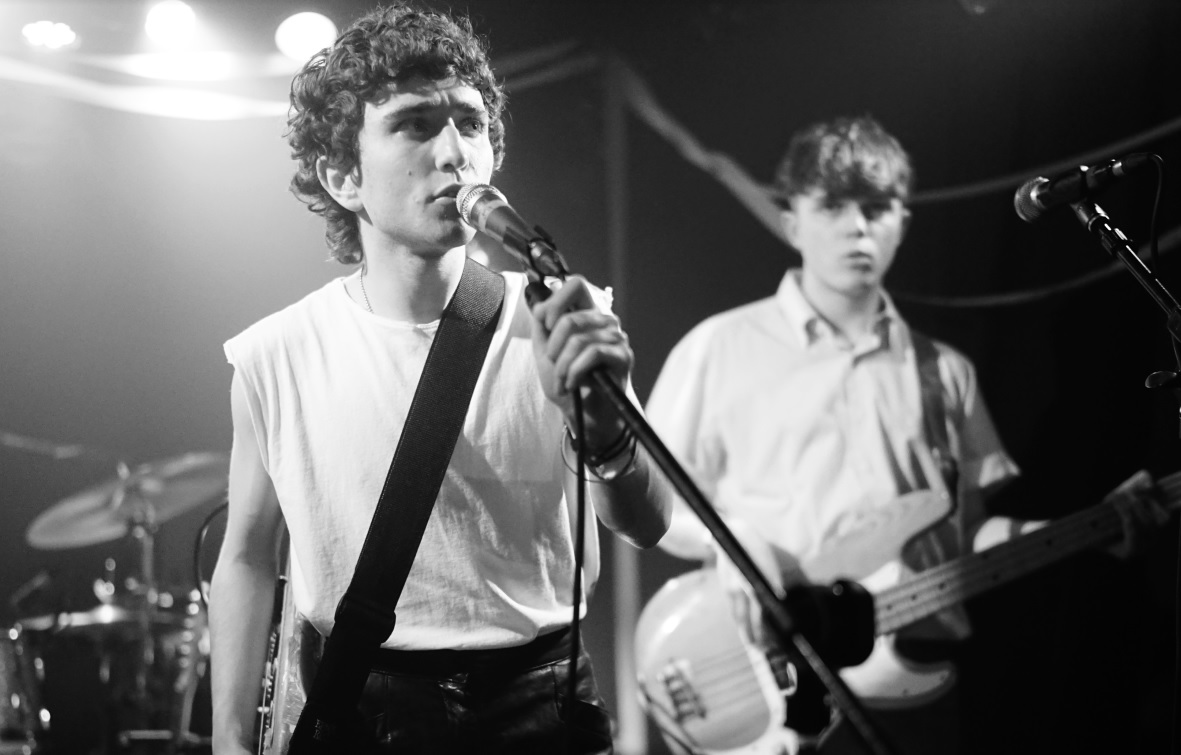 This is a band that are now gaining the momentum that they deserve. They are now ready to step forward as the headline act, having previously supported the likes of Pip Blom, The Snuts and Ed The Dog.

We were treated to ten tunes tonight, which started with strong numbers ‘Alright’ and The Beatles-esque ‘I Am’. The room had been filled and the band appeared to have more confidence than my previous encounters. I’m not sure if this is because they are headlining tonight or whether it’s something that new boy Zac has brought to the party. He is much more animated with his bass than Molly was and you get the ‘more energy’ vibe with them now. Although I must confess I did miss Molly’s continual smile whilst he played her bass.

Niall’s new image with his (self designed) white t-shirt and leather trousers is a cool look and he is appearing more like early Adam Ant and Marc Bolan every day, especially on their most punky number ‘Find Your Way’, where Niall ditches his guitar to solely concentrate on vocals. I was standing there wondering how on earth are this band not playing larger venues to even bigger crowds. I guess that the words not quite out as yet.

Their third number was a new composition titled ‘First Class Ticket To Nowhere’. Now this one has serious chart potential. I’m not totally sure what happened during this tune, but Noah had either somehow lost or broken a drumstick. Amazingly there we no spares to hand – doh schoolboy error. Drummer David from the previous band, kindly went and got one, whilst The Bloome’s threw together an impromptu jazz style jam, which you could argue was track number four.

Replacement drumstick in hand and they were ready to launch into the best track that The Smith never wrote! The song is called ‘The Sun On Her Back’ and I loved it! 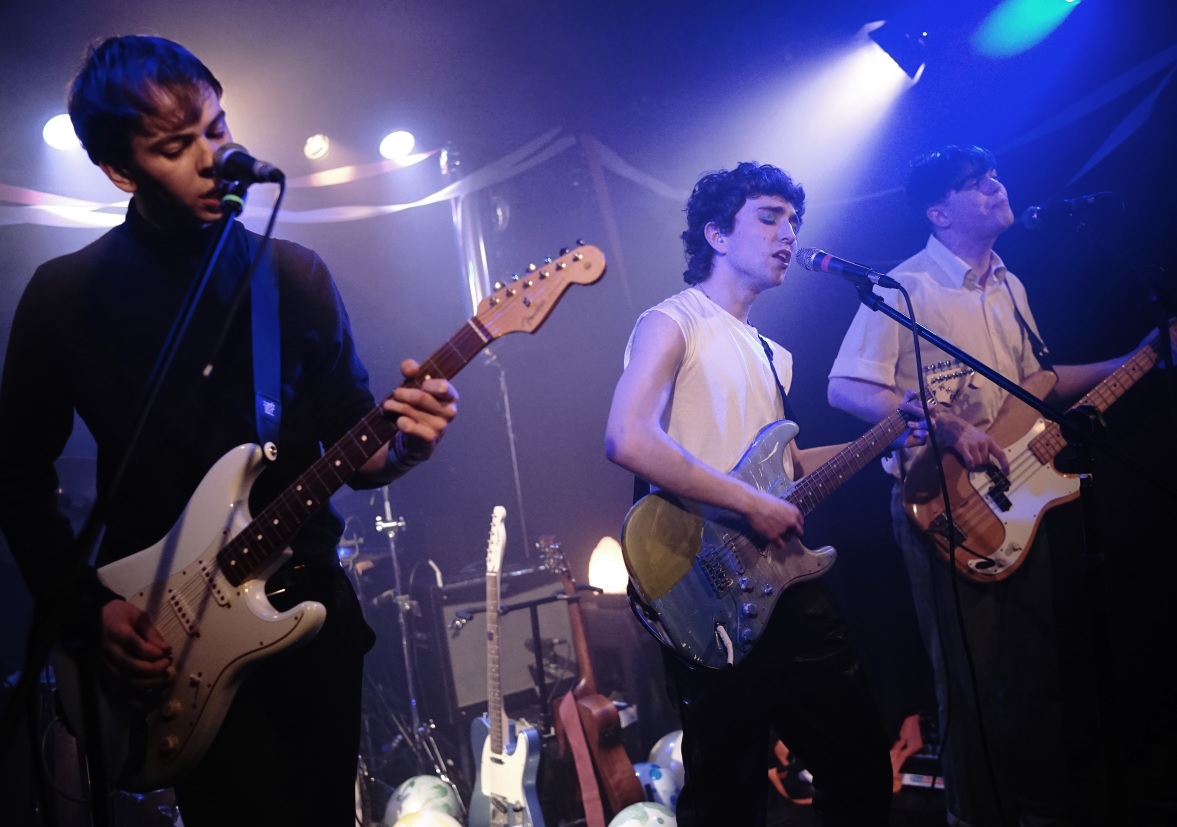 They went on to perform ‘Interlude’, which delivers a wall of rhythmic noise before becoming a quiet instrumental gem. This segues straight into ‘Pink Sky’, which is a very strong tune that one would expect to hear in a stadium being played by one or both of the Gallagher brothers.

The penultimate ditty was ‘Plastic’ which comes with its handclap beat and Barney Sumner (New Order) vocal delivery. Their finale is the nearest that they delve into rock. It’s a tune called ‘Fin’ and is strangely my least fave tune of theirs on the night.

There is no encore just cheers and handclaps and happy faces heading out of the venue into the cold night air of Gardner Street.

Lacuna Bloome setlist:
‘Alright’
‘I Am’
‘First Class Ticket To Nowhere’
‘The Sun On Her Back’
‘Find Your Way’
‘Freeloader’
‘Interlude’
‘Pink Sky’
‘Plastic’
‘Fin’

We always endeavour to get to gigs in time to see all of the bands. I know several people who simply swan in (from the bar) at the last moment for the headliners – BIG mistake! You see sometimes the smaller first up bands are just waiting to be discovered and tonight The Keep Cats are one such act! 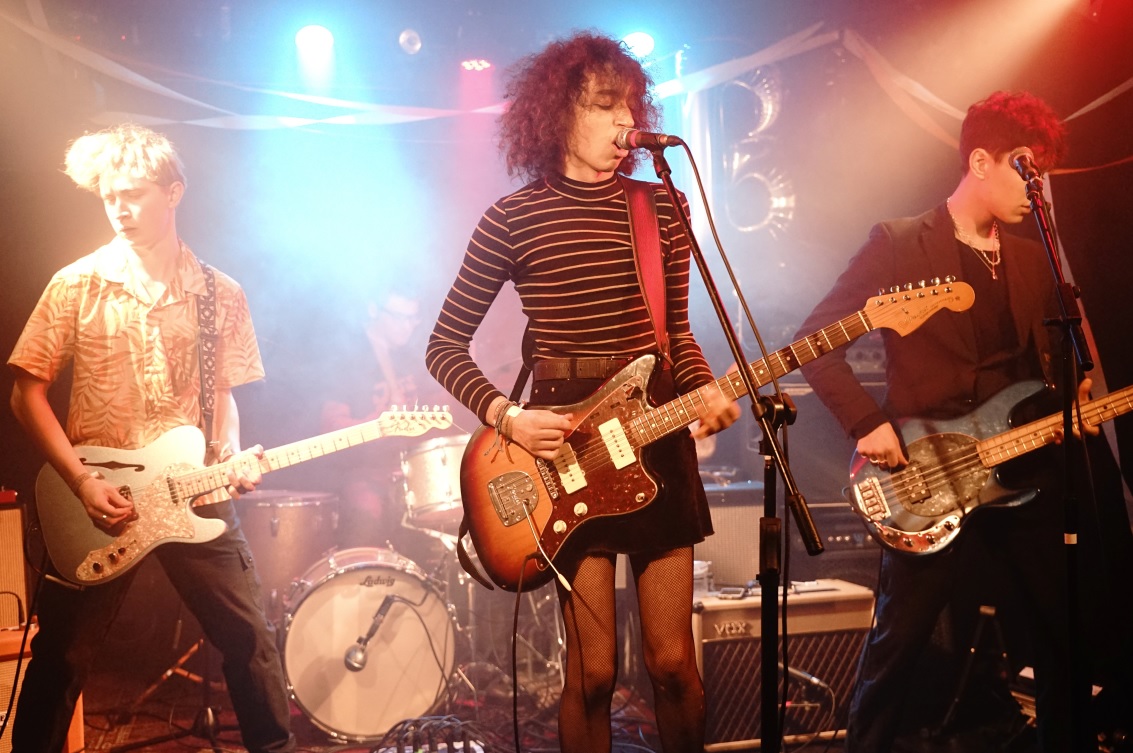 I must confess that this is my first experience with this young Guildford based quartet, having stupidly not picked up on them when they were previously performing in Brighton on 5th February 2019 at the Latest Music Bar with Valeras. I checked our gig planner and I was free that night – oh pants!

The Keep Cats are the perfect band for The Great Escape new music festival, which is held in Brighton each May. They have the uniqueness, the energy, the tunes, the musicianship, the youth and it’s difficult to take your eyes off of them, especially front person Jo. The Great Escape musical act selectors please take note!!

The band are Jo (lead vox/lead guitar), Eden (bass/backing vox), Fin (guitar) and Louis (drums) and I reckon that they are plying their wares very nicely thank you. They refer to themselves as players of ‘dirt pop’ and I certainly wouldn’t disagree with that. During their fast paced seven track set, they showed the university/college audience exactly how much potential they have with their catchy tunes.

Vocalist Jo has a Brian Molko (Placebo) meets Robert Smith (The Cure) vocal style going down which works very well, combined with ‘her’ dark flowing locks akin to both sadly departed Marc Bolan (T.Rex) and Phil Lynott (Thin Lizzy). Other highlights of the captivating set was Louis’ drumming on Big Country-esque ‘The Feeling’, as well as Fin in his bright yellow shirt, putting his guitar through its paces. I’m not sure Eden’s mic was loud enough though for his backing vocals.

They currently do not have any up and coming Brighton concert dates (unless The Great Escape people rectify that situation), but you will be able to catch them at The Grace, Islington on 27th March, 11th April at the Heartbreakers, Southampton, and 25th April at the ‘Are You Listening? Festival’, Reading.

The Keep Cats setlist:
‘Olivia’
‘Take Me Back’
‘All You Got Left’
‘The Feeling’
‘The Water’
‘Far Too Long’
‘You Said’

Enjoy The Keep Cats on Soundcloud. 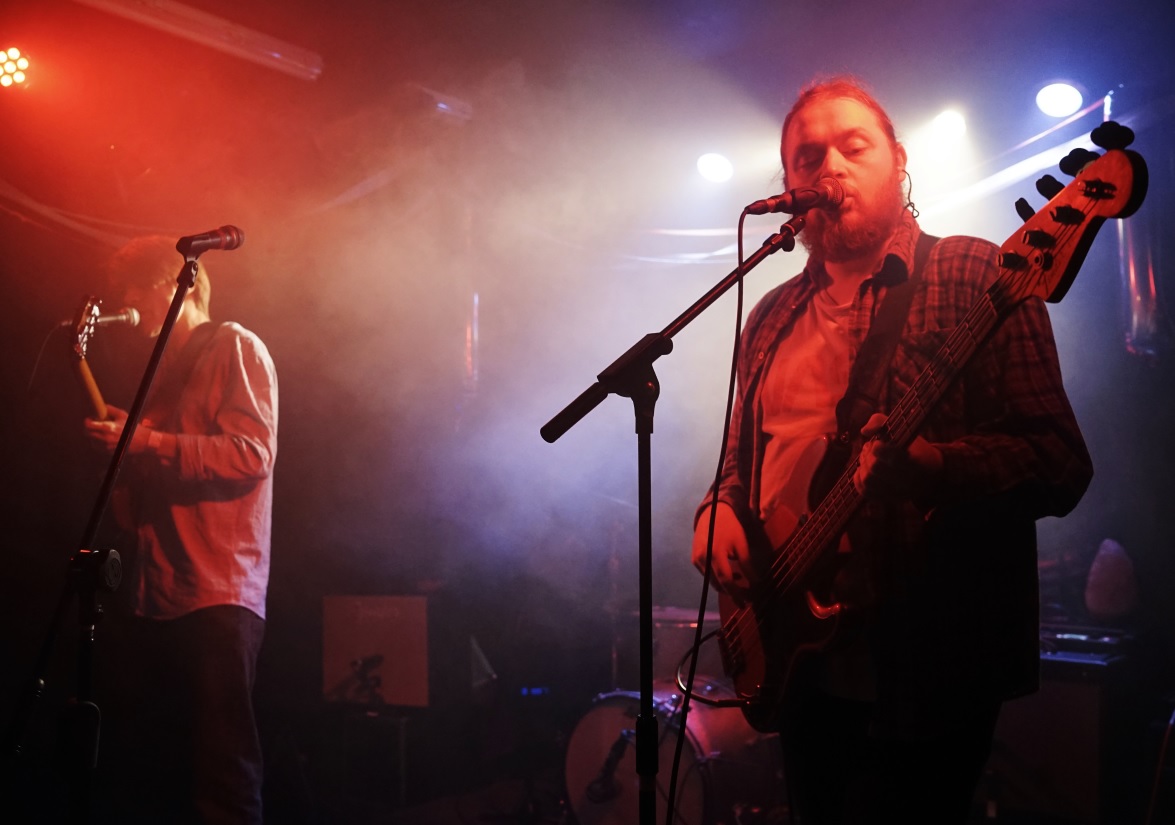 After the release of their debut single ‘Tell Me’, they performed at Pilton in front of Micheal and Emily Eavis and also Huw Stephens which earned them a slot at last years Glastonbury Festival, where they performed alongside renowned acts such as The Killers and Two Door Cinema Club. The Roma Palace sound takes its influences from groups such as Vampire Weekend, Phoenix and Parcels, thus the lads are setting their sights on making eclectic pop music.

Tonight, they performed a seven song set for the punters, who strangely were noticeably less than those that were present for The Keep Cats. Possibly some had gone outside for a ‘fresh air break’ and the others might have just been mates for the opening act.

Roma Palace are a totally different beast to the predecessors, they are quite a funky bunch, although you might not have guessed that from their look prior to playing. One would have possibly wrongly assumed heavy rock. They opened with relatively funky ‘Last Melody’ and swiftly went on to the first track they ever released, which was ‘Take My Heart Away’. Their latest single ‘Voices’ was up next. There was some pleasant banter in between tunes and we learned that my fave track of theirs ‘Groove Cabin’ was written in a shed in guitarist Pol’s French abode. They closed with ‘Tell Me’, which along with the song before, were much funkier than the others. The girls at the front were enjoying themselves bopping along to the beats. Check out their tune ‘You’ HERE. 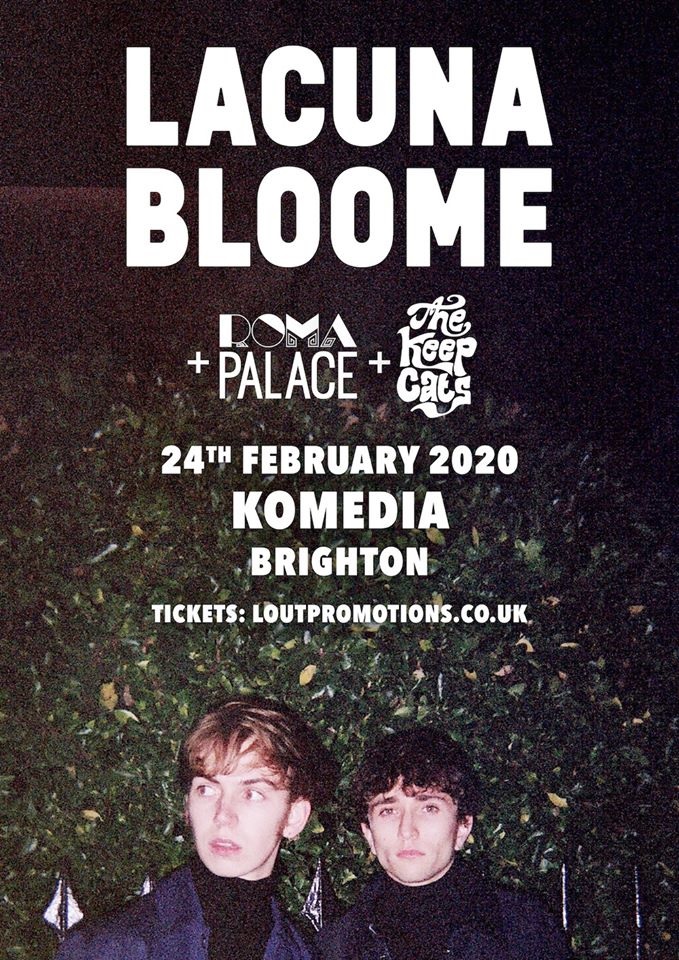 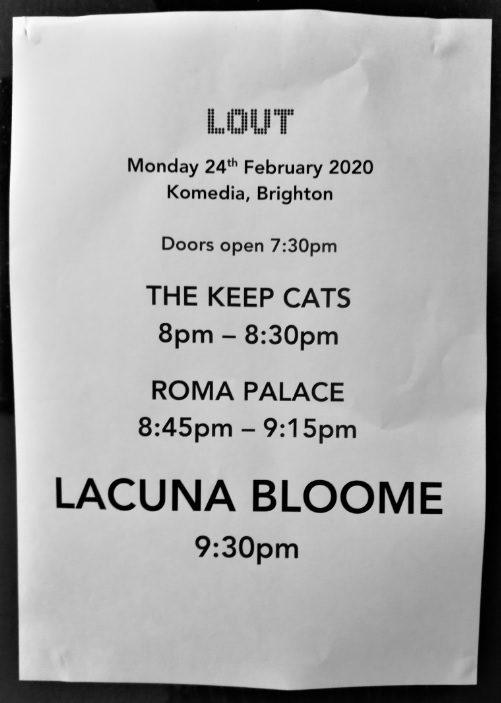 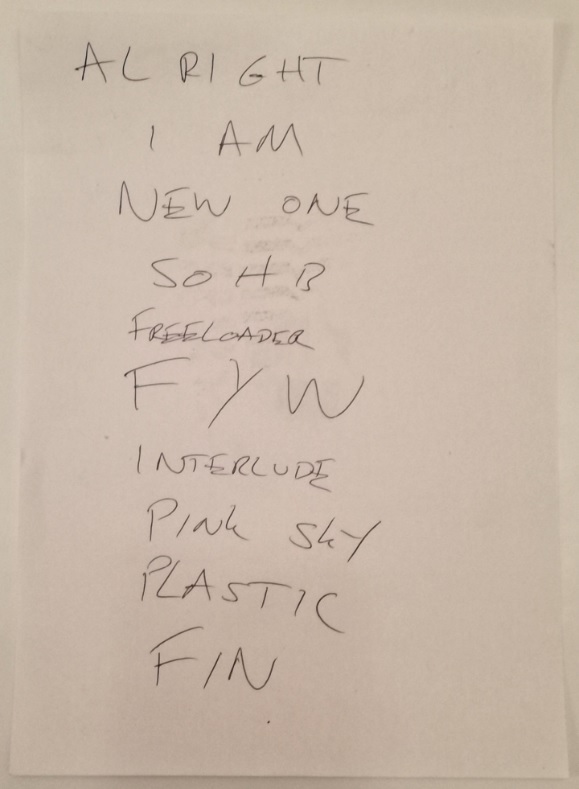