The outside wall of a listed building needs replacing as it bulging too far for repair and is unsafe, according to structural engineers. 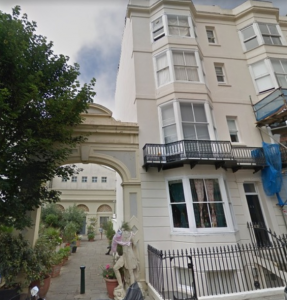 Investigations into the bulging bungaroosh wall of 22 Waterloo Street, in Hove, found that it was more than 11cm out of alignment.

The only way to fix it is to demolish and rebuild the wall, according to structural engineers Phillip Goacher Associates, whose investigations found that the mortar is failing.

Emergency scaffolding is in place to keep the grade II listed building – next to the Waterloo Arch – safe.

There are also minor cracks between the house and the arch but, in a report before Brighton and Hove City Council planners, these were described as “not significant”.

There are several vertical cracks in the building at higher levels which were repaired and have not reopened.

A horizontal crack runs halfway across the wall between 1.5 metres and 2 metres above ground level.

A plumbline dropped from the roof found that the wall was leaning by 11.5cm.

At its worst, the bulge bows out by 4cm and bows in by 7cm.

Bungaroosh is a building material used widely in Brighton and Hove in the 18th and 19th century.

It is a mix of broken bricks, cobblestones, flints, pebbles and sand mixed with lime mortar.

It moves when it is wet and crumbles when it dries out.

The report on the application to rebuild the wall said: “In summary, the lower half of the wall bulged out severely and required emergency scaffold support which is still in place.

“Unfortunately, the wall was found to be extremely weak, with no strength to the lime mortar, and hence it was not considered possible to safely prop the upper levels to demolish the bowed, failed area only, and full replacement will be required.”

Temporary stud walls will be put in place during the reconstruction to make a building weatherproof.

The plans can be found on the council’s website by searching for BH2020/00926 at planningapps.brighton-hove.gov.uk.