Brighton and Hove cyclists hit out at tip ban 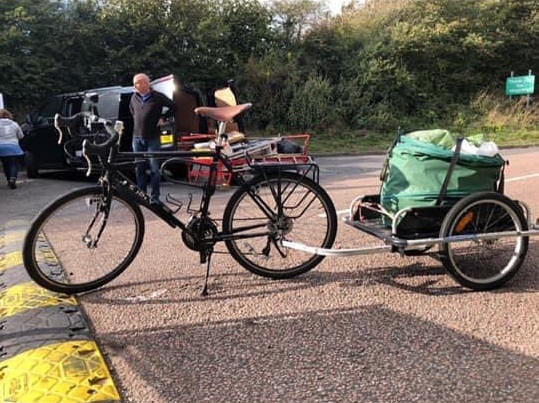 Cyclists have hit out at the council’s new policy of only allowing people in cars and vans use its tips.

Since the waste transfer sites at Wilson Avenue in Brighton and Old Shoreham Road in Hove reopened, cyclists and pedestrians have not been allowed to enter.

The council says this is because it’s too dangerous because of the large queues which have built up at the sites.

But this means that the huge numbers of households in Brighton and Hove without a car are left having to either pay for bulky waste collections or put garden waste and other non-collectable recycling in the bin.

Paul Bonnett, who lives in Brighton, posted the picture above on Twitter of his bike and trailer full of garden waste which he had hoped to take to the Wilson Avenue tip – but had been turned away.

He said: “I just don’t get it. It makes no sense. I can’t take my #recycling to Brighton tip with my #bike and trailer as I normally do.

“It doesn’t get in the way, and it’s good for the environment for me to cycle there and good for my health. I can’t see a negative.”

His comments were echoed by Green councillor Sarah Nield, who tweeted: “You can’t currently cycle to the tip in Brighton – and you can’t walk there either.

“So what are the 40% of households without a car meant to do? I’m told I can pay for a bulky waste collection. But I want to recycle.”

A council spokesperson said: “This is a temporary restriction while we manage demand at the household waste recycling sites.

“Demand is currently so high that cars are queuing on the access roads all day making it unsafe for pedestrians and cyclists.

“We are reviewing this on a regular basis and will let in pedestrians and cyclists when it is safe to do so.

“Pedestrians and cyclists will only be permitted at the Hove site when there is a safe space for them to walk. Cyclists must dismount before entering the site and wheel their bike in.

“Pedestrians and cyclists will not be permitted at the Brighton site as there is no safe route to enter.

“As soon as the restriction at Hove has been lifted, our website will be updated.”