A Brighton pub is in the running for a £10,000 prize for “feeding the community” during the coronavirus lockdown.

The Bevy is one of seven pubs shortlisted for the prize at the Great British Pub Awards and is urging people to take just a few seconds to vote.

Even before the lockdown, the community pub, in Hillside, Moulsecoomb, already laid on food for older people in the local area, with its popular lunch clubs.

But when customers were no longer allowed in Bevy, the Bevy went to them, delivering “Bevy Meals on Wheels” to vulnerable neighbours.

Helen Jones, who has been co-ordinating Bevy Meals on Wheels, said “Running two weekly Lunch Clubs and a Dementia Club we were well aware of the existing social isolation and loneliness among local seniors.

“So we did a ring around to see who would like a meal during the lockdown period, especially since over seventies had been advised to stay indoors.

“We’ve worked with partners across our community from churches and charities to schools and have been able to contact so many people who would have been terribly isolated.

“In addition to making sure no one went hungry, the deliveries were an opportunity to safely make social contact and find out if people needed help as well as providing a little bit of structure and connection to the outside world and letting people know that they are cared about.”

The Bevy has now delivered more than 5,000 meals to vulnerable people, including the elderly, those shielding and local families.

The service is still going, funded by donations from the public for those who can’t afford to pay for the meals themselves.

The pub reopened late last month with a food menu available to enjoy in the pub garden – and with its kitchen accepting takeaway orders.

The Bevy said: “On Wednesdays, some of the seniors now come to the pub garden for a socially distanced lunch, chat and some entertainment in collaboration with local charity Gladrags.” 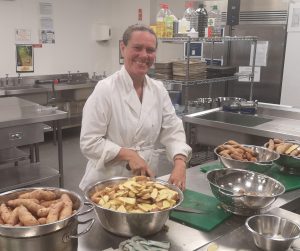 Bevy chair Warren Carter said: “When the lockdown happened it was a no-brainer to help out the people who usually come to the pub for food, drink and company.

“It’s fantastic to be recognised in the Great British Pub Awards and we hope this means more people hear about what we’re doing and come and visit us.

“Supporting us supports all our community activities including Meals on Wheels.”

The awards organisers said that there was a £165,000 prize fund for the 15 categories and added: “Each winner will be offered the opportunity to submit an application for up to £10,000 each to fund a business improvement or upgrade or to put towards a community project, courtesy of Coca-Cola.

“Additionally, Coca-Cola will fund a further £1,000 donation to a local charity or good cause supported by each of the winning pubs.”

The Bevy is one of seven to have been shortlisted in the Feeding the Community category and is the only Brighton and Hove pub among this year’s awards finalists.

The Great British Pub Awards are held each year and the winners are normally decided by a panel of judges.

But this year, in the spirit of community, the winners will be determined by an online public vote.

Voting is under way and closes on Wednesday 26 August. To back the Bevy, click here.

To make a donation to help keep Meals on Wheels going, click here.