Brighton and Hove Albion have signed a 20-year-old defender from second-tier Dutch side Breda. 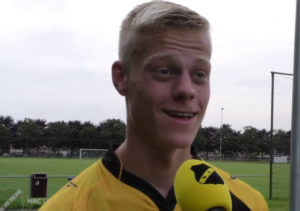 But the new signing, who has joined the Seagulls on a three-year contract, is likely to go straight out on loan.

Albion said: “Brighton and Hove Albion are pleased to confirm the signing of Dutch defender Jan Paul van Hecke from NAC Breda on a three-year contract.

“The 20-year-old joined Breda in 2018 and is regarded as one of the best young defenders in the Netherlands.”

Technical director Dan Ashworth said: “We have been tracking Jan Paul for quite a while and we’re delighted he has joined us.

“He’s a young talent, a powerful defender who is comfortable on the ball and good in possession.

“The plan now is that he will go out on loan to a club in Europe for the season to continue his development.

“The club’s loans department, led by David Weir, will monitor his progress closely over the course of the season.”