A wanted man from Hove has been arrested and charged, Sussex Police said today (Tuesday 3 November). 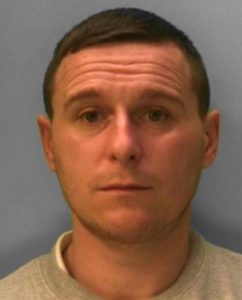 Ryan McLean, 37, of Moyne Close, Hangleton, and formerly of Monarch’s View, Portslade, was due to appear in court in Brighton earlier.

He was arrested just over a week after Sussex Police offered a reward for information leading to his arrest and conviction.

The force said: “A man who was wanted in connection with offences in Hove has been arrested and charged.

“Ryan McLean, 37, of no fixed address, was detained on Monday (2 November) and has been charged with driving while disqualified and driving without insurance in Hove on Friday 23 October.

“He has been remanded to appear at Brighton Magistrates’ Court on Tuesday (3 November).”

Last month Sussex Police said: “Police are offering a £500 reward for information leading to the arrest and conviction of Hove man Ryan McLean.

“The 37-year-old is wanted in connection with committing criminal damage and witness intimidation last month (September).”