Cowardly bullies film attack on boy, 12, before sharing it on Instagram

Two bullies picked on a boy much smaller than them, filmed their attack and then posted it on social media. 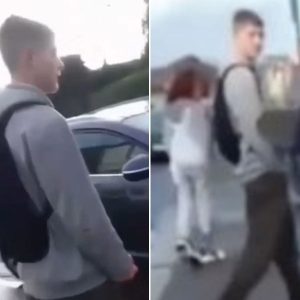 The force said: “Police are asking the public to help identify one of two suspects responsible for an attack on a 12-year-old boy in Southwick on Wednesday 28 October.

“The incident, which appears to be entirely unprovoked, happened at around 2pm as the victim walked along Underdown Road with a group of friends.

“They were approached by two older boys who kicked and punched the victim, causing bruising and swelling to his face.

“The incident was filmed using a mobile phone which one of the suspects then shared on Instagram.

“The boy pictured in the image is described as white, 5ft 9in and of medium build. He is about 15, with short, mousey coloured hair.

“He was wearing khaki colour trousers, a grey hooded jumper and had a black Nike rucksack.

“The second boy who filmed the incident, but is not pictured, is described as white, 5ft 9in and of medium build. He is also thought to be about 15, with curly blond hair.”

PC Emma MacSweeney said: “This was an unprovoked attack on a 12-year-old boy by two suspects who are much bigger than him.

“The assault was filmed by one of them and distributed on social media.

“We are now appealing to the public for assistance as we are confident someone knows who these individuals are.”

Sussex Police added: “Anyone with information is asked to report online or call 101 quoting serial 0499 of 05/11.