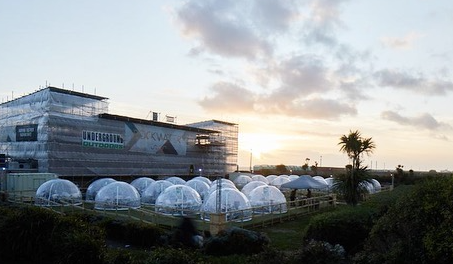 The millionaire owner of a new Hove bar has launched a blistering attack on his neighbours, accusing them of of “undermining the community” by objecting to his plans.

Venture capitalist Luke Davis has transformed the former View nightclub, renaming it Rockwater and giving it a £4 million makeover, including a new retractable glass roof.

He has also installed temporary beach huts and glazed igloos in the garden to help serve customers in a socially distanced way during lockdown.

The plans have attracted near-universal approval from the neighbourhood, with hundreds of people commenting in favour of the planning application for the glass roof.

But a handful of objections – one from nearby resident and Boxpark CEO Roger Wade – has prompted Mr Davis to make accusations of underhand plots which have left the business “fighting for its life”.

The latest accusations been prompted by a letter of objection to a permanent alcohol licence for the beach huts, which Mr Wade submitted to Brighton and Hove City Council this week.

In the letter, Mr Wade said: “We live in a quiet residential neighbourhood and noise from customers leaving the premises from 10pm onwards already causes noise disturbance.

“We have tolerated this until now, but feel that enough is enough and the ability to sell alcohol from the outside shacks should now end.

“This has, in recent days, caused a huge amount of nuisance on the sea front in Hove and any continued use of these shacks will only exacerbate the issue.

“A recent report highlighted that the owners were ‘overwhelmed’ by the crowds on the sea front and that the residents had lost faith in the operator being able to provide a safe and secure facility.”

Mr Davis said: “He is actively working against the community of Hove who, time and time again, have shown their overwhelming support for what we are hoping to achieve here at Rockwater Hove.

“We sought to found Rockwater Hove that created a community hub, offering not just a place to socialise, but also to bring locals together to enjoy a host of health and wellbeing classes, that benefitted everyone.

“This project was truly about unity and rejuvenating a community, which incidentally, are the exact same reasons that Roger Wade founded Boxpark.”

The row first broke out publicly in September, when Mr Davis and Mr Wade argued on the Hove Seafront Residents Association Facebook group.

Mr Wade said he was concerned about the combination of a roof terrace and a 3am licence, and asked Mr Davis to consider reducing the venue’s opening hours to midnight.

Mr Davis insisted the venue would usually close much earlier, but needed to be able to open into the early hours about once a month for weddings or other functions.

This week, Mr Wade told Brighton and Hove News: “As a local resident and member of the Walsingham Road Resident Association, I have a right to be concerned about a late-night venue open seven days a week until 3am.”

The planning application for the roof – which also includes a new pergola – doesn’t mention opening hours. It was submitted in August and is still under consideration. It currently has close to 600 supportive comments.

The application for a permanent alcohol licence for the beach shacks until 10pm was submitted in November and is also still under consideration.

In the years before Rockwater took over, the venue was called The View, The Venue and Babylon Lounge. It was used mainly to host parties, disco nights for language students and male strip nights, which often attracted hen parties.