A row about racism stopped a council meeting mid-flow this evening, with further recriminations promised.

It started with a question about a recent commitment by Brighton and Hove City Council to become an anti-racist council.

Conservative councillor Mary Mears asked why Labour councillor Nancy Platts had refused to answer questions about her former role in Jeremy Corbyn’s office when he was Labour leader.

The questions followed the publication of a critical report by the Equality and Human Rights Commission after its “Investigation into the Labour Party”.

The report found that Labour had broken equality law in its handling of complaints about anti-semitism.

Councillor Platts is not named in the report.

Green council leader Phélim Mac Cafferty said that it would be “inappropriate” for him to answer Councillor Mears’s question.

But he said: “Members have said that they want to fight racism and I know that Councillor Platts is among those councillors.”

But while the public debate moved on to another topic, messages were being exchanged behind the scenes, including in the meeting’s “chatbox”.

The fomenting tensions were brought to the surface by former mayor Dee Simson. The Conservative councillor said: “Comments have been left in the chatbox which are just there to incite.

“We can all be civil to each other. It’s completely unnecessary.”

Labour councillor Nick Childs immediately held up his hand and said: “It was my comment in the chatbox about the Prime Minister.”

He had referenced Boris Johnson writing in a newspaper column that women wearing a burqa resembled bank robbers. 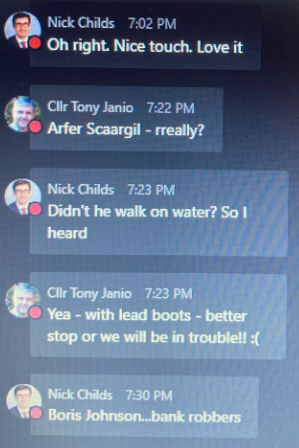 The chatbox exchange that brought the council meeting to a halt

Councillor Childs said: “I’m happy to retract it as long as Councillor Mears retracts her libellous comment about Councillor Platts.”

Councillor Platts said that she was happy to take the matter through the council’s “standards” process, adding: “I do consider it to be a libellous comment and I’m considering legal action.”

One challenge will be the legal protection, known as privilege, attached to comments made in council meetings, although unlike MPs, who have absolute privilege in Parliament, councillors have qualified privilege.

Independent councillor Kate Knight said that she and her colleagues had had meetings at which councillors’ conduct had been discussed.

Councillor Knight said: “It was agreed that these meetings were acrimonious and unpleasant.”

She spoke about a tendency towards personal abuse and added: “Not only are there serious personal allegations being made but flippant and offensive and personal remarks that have no place in this sort of meeting.” 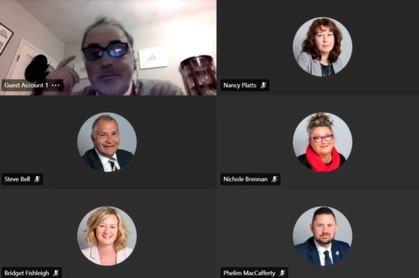 As others interrupted, the mayor, Councillor Alan Robins, who chairs meetings of the full council, called a five-minute break so that members could calm down.

The remote meeting restarted about 20 minutes later and came to an early end because of technical problems.

The final council meeting before Christmas is more often marked by councillors exchanging cards and pleasantries – including across party where friendships exist despite the political rivalries.

Although it is the season of goodwill, this was a meeting with fewer signs of the festive spirit on show than usual.

One councillor said privately: “This was a disgraceful, petulant and childish display from all sides and they should be ashamed of themselves.”