Online publisher WikiLeaks is alleged to have “leaked all their files” including one relating to a motion that was rejected for debate by Brighton and Hove City Council. 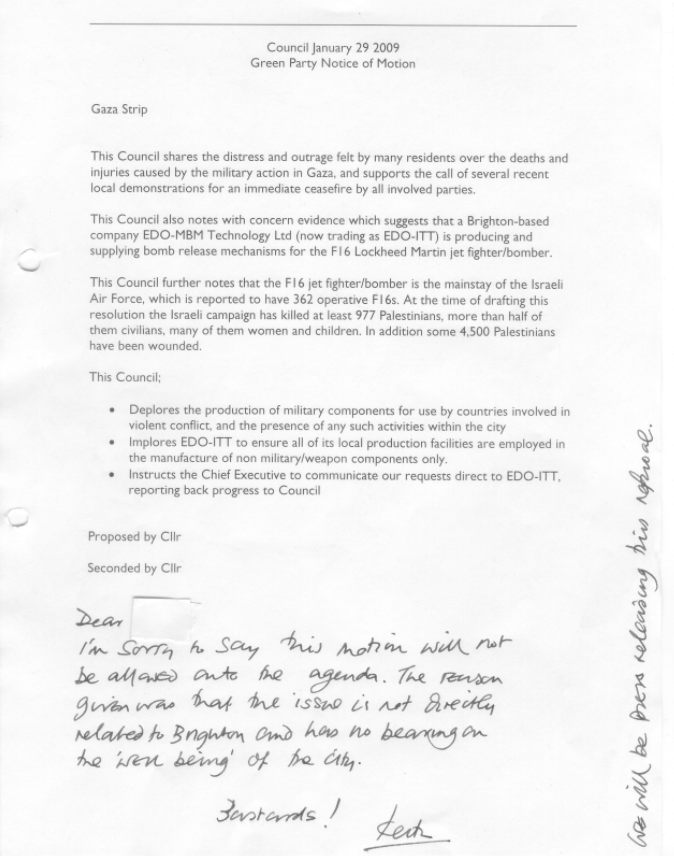 While there are doubts that there has been a fresh “data dump”, scores of files and an index have been circulating widely as a result of the claims.

One of them is a note by former Green councillor Keith Taylor in January 2009 before he became a Member of the European Parliament (MEP).

It was handwritten under a draft “notice of motion” submitted to the council for debate.

The motion referred to the EDO factory in Brighton and claims that parts made there were being used in aircraft used by Israel to bomb Palestinians.

Mr Taylor wrote: “I’m sorry to say this motion will not be allowed on to the agenda.

“The reason given was that the issue is not directly related to Brighton and has no bearing on the ‘wellbeing’ of the city.

He added: “We will be press releasing this refusal.”

The draft motion, headed “Gaza Strip”, said: “This council shares the distress and outrage felt by many residents over the deaths and injuries caused by the military action in Gaza and supports the call of several recent local demonstrations for an immediate ceasefire by all involved parties.

“This council further notes that the F16 jet fighter/bomber is the mainstay of the Israelie Air Force which is reported to have 362 operative F16s.

“At the time of drafting this resolution the Israeli campaign has killed at least 977 Palestinians, more than half of them civilians, many of them women and children. In addition, some 4,500 Palestinians have been wounded.

The claims of a data dump have been circulating as WikiLeaks founder Julian Assange waits to learn whether he will be extradited to America. A ruling is due next week.