Councillors were urged to make difficult decisions when it comes to winning backing from their communities for new transport measures.

Green councillor Tom Druitt told colleagues, including his political rivals, to “not chicken out” during discussions about the Brighton and Hove Climate Assembly and Youth Climate Assembly’s recommendations.

They should, he said, be prepared to make some potentially unpopular decisions.

The Climate Assembly was made up of 50 residents who took part in five virtual meetings from September to December last year.

Councillor Druitt urged councillors to take the Climate Assembly’s findings back to their residents and said that councillors had to be honest with themselves and residents because the world could not get through the climate crisis without changes.

He said: “This does not mean we all have to go and live in caves. It does mean we are going to have to make some difficult decisions when it comes to implementing the recommendations.

“This is our home we are talking about. It is not just a weird other concept but about looking after our home so we can carry on living here.”

Councillor Druitt said that councillors should not welcome the Climate Assembly’s report but then fail to make the necessary decisions in future to implement the recommendations. 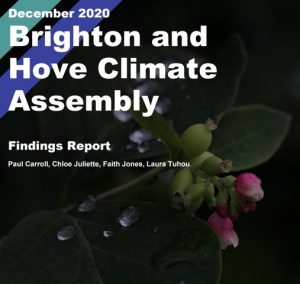 Earlier in the week, Green and Labour members of the council’s Environment, Transport and Sustainability Committee agreed to ask for more detailed plans for a car-free city centre.

At the same meeting on Tuesday (19 January), they also asked for further work on setting up an ultra-low emission zone.

The Conservatives abstained after raising concerns about the need for new infrastructure to bring about the change.

At the same meeting on Tuesday, Labour and Conservative councillors also criticised increases in parking charges while the Greens criticised them for failing to back the Climate Assembly’s recommendations.

The committee asked officials to consider the findings when drawing up the council’s next local transport plan and its local cycling and walking infrastructure plan.

Council leader Phélim Mac Cafferty said: “It is a really exciting piece of work. I love the fact there was a massive range of backgrounds and people from different communities, people I would never have encountered living in the city.

“They were really robust and frank about what they felt needed to happen and I respect that.”

The Green councillor said that the Climate Assembly was not the end of the conversation and added that he welcomed the thoughts and views of residents.

He said that the assembly had stayed focused on the challenges faced in trying to ensure Brighton and Hove became carbon-neutral by 2030.

Labour leader Nancy Platts said that she was proud of the Climate Assembly which was a manifesto pledge by her party at the last local elections.

Councillor Platts urged the council to share the findings as widely as possible, particularly with those who lacked access to the internet, by putting copies of the assembly’s report in public libraries.

She said: “I am really proud of what we’ve done. I think it is a genuinely cross-party effort. It is going to be a huge challenge to implement some of these changes. Everybody is going to have to do their bit.

“The next stage is going to be a bit more difficult as we persuade people that they may need to change the way they live and travel in order to meet those very challenging targets.”

Councillor Bell said: “People criticise, but we are the first government that has agreed to sign up to zero emissions by 2050. Obviously, we need it to be sooner than that. We are on the road of trying to ensure that we save our planet.”

Councillor Bell said that Britain was doing what it could to tackle climate change and, along with our European neighbours, to drive down carbon emissions.

But, he said, these goals were undermined by China and other nations pumping out more carbon than ever.