Dolphins clear another hurdle on their way to Norfolk Square 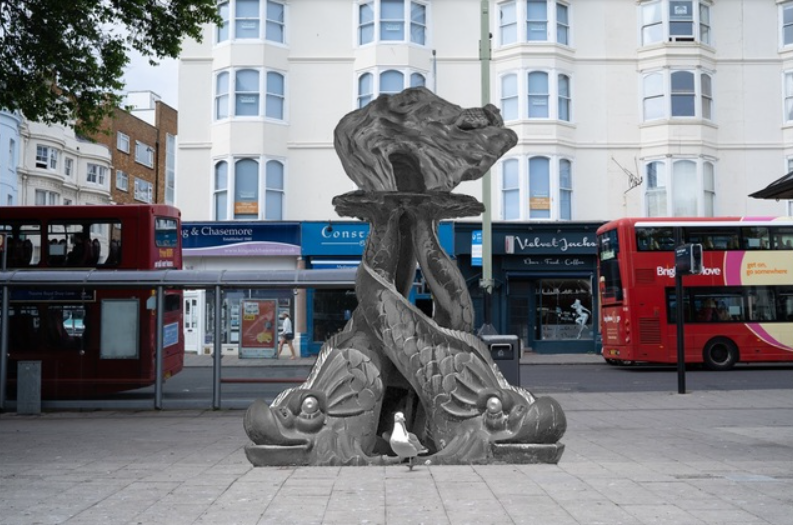 A dolphin sculpture in Norfolk Square has been granted planning permission by councillors this afternoon (Wednesday 10 February).

The decision paves the way for artist Steve Geliot’s Waves of Compassion to be installed at the north end of Norfolk Square, between the two kiosks, in Western Road, Brighton.

The sculpture is being made from three 180-year-old cast iron dolphins which used to form part of the Amon Henry Wilds grade II listed Victoria Fountain, in Old Steine, Brighton.

The dolphins were removed from the fountain when it was refurbished in 1990 and stored outside in Stanmer Park, Brighton.

They were highlighted as examples of lost and forgotten local heritage along with street lanterns from the seafront which ended up for sale on social media.

These prompted calls for a register of all public heritage items in Brighton and Hove, including sculptures, lights and railings.

The dolphins have been taken to the Swan Foundry in Banbury for repair with a view to being repurposed and installed in Norfolk Square.

Mr Geliot has been working with people living in the area on the commission. The sculpture, believed to have cost about £24,000, was commissioned by Brighton and Hove City Council.

The funding is understood to have come from the developer of the Montpelier Place Baptist Church as part of a legal agreement with the council, known as a “section 106” agreement.

The council’s Planning Committee approved the proposal without debate at a virtual meeting this afternoon.