A chef has been jailed for eight years for raping a man on Brighton beach in what was described as a “truly horrific attack”.

Aynul Hoque, 32, of Richardson’s Yard, New England Road, Brighton, targeted a tourist who was on the seafront in Madeira Drive after a night out.

But he was seen having sex with his unconscious victim and the police were called.

Hoque pleaded guilty to raping the man early on the morning of Saturday 1 August last year.

This afternoon (Friday 12 March) he was jailed for rape and theft by Judge Christine Laing, the honorary recorder of Brighton and Hove, at Brighton Crown Court.

Sussex Police said: “His arrest came after police were called by a member of the public shortly before 5am on Saturday 1 August 2020, reporting a man appeared to be having sex with a man who was unconscious.

“He was arrested and first aid was administered to the victim.

“Hoque was positively identified by witnesses and was found to be in possession of some items belonging to the victim.

“He was also in possession of a black balaclava.”

The investigation, Operation Chesterton, ended with Hoque being jailed.

Detective Constable Stephen Nutley said: “The victim in this case had been enjoying a visit to the city when he was subjected to this truly horrific attack.

“It has caused him a great deal of trauma and distress and he has been supported by specialist officers throughout the investigation.

“On the night in question, he had been walking along the seafront after a night out with friends.

“He had stopped and had friendly conversations with a number of people before heading down to sit on the beach.

“It was there that the suspect took advantage of the victim. 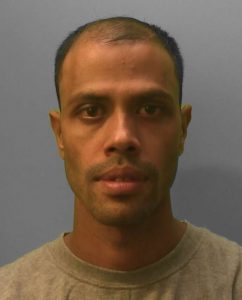 “Thanks to the vigilance of members of the public and the swift response by officers, we were able to arrest the suspect at the scene.

“We built a strong case and, despite Hoque initially denying the offence, he later pleaded guilty.

“The fact he was in possession of a balaclava, in our mind, shows he was intent on committing an offence that night.

“We are pleased to see the severity of the attack reflected in the sentence handed out by the judge today.”