An alcoholic ice cream parlour called Mr Tipsy can open after being granted a premises licence by Brighton and Hove City Council. 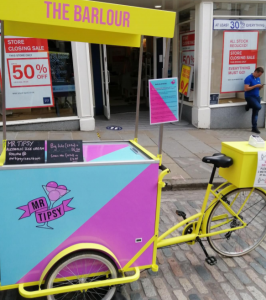 The owner, Tom Gathercole, agreed to accept a number of licence conditions after Sussex Police and the council initially objected to his plans.

Their concerns included “crime and disorder and public nuisance” from customers having too much alcohol.

The shop is planned for George Street, in Brighton, close to St James’s Street, in an area where they said drinking had been linked to crime and hospital A&E admissions.

A council licensing panel was told that Mr Gathercole had worked with police to agree the conditions, including limits on strength.

He agreed that 30 per cent of ice cream would be non-alcoholic and displayed separately.

And, with an offer that would include cakes and coffee, alcoholic ice cream would make up less than half of the products on sale.

One councillor wondered whether people would get drunk if they came for a couple of scoops on a night out.

Mr Gathercole said that the sugar and fat in ice cream slowed down the rate of alcohol absorption – and he added that he would not serve people who were drunk.

The licensing panel, made up of three councillors, said in its decision: “The panel is very mindful of the location of the premises … and the need to ensure that the application will not add to problems in the area.

“To that end, the panel had concerns about future product development and wanted to ensure that very high strength products would not be available. The panel, therefore, imposes a further condition to go on the licence as follows.

“The panel believes that there are exceptional circumstances relating to this application. The conditions agreed to mean that the alcohol on sale will be limited to ice cream with a relatively low alcohol content in terms of the portions or scoops sold.

“As such it is a unique and exceptional operation with comprehensive control measures and not likely to add to negative cumulative impact in the area.”