Neighbours fear that a former language school could become a party house if the owner is granted planning permission for a change of use.

People living near by are concerned that the house may become a venue for stag and hen parties.

The plans for the Edwardian property include 10 bedrooms, seven bathrooms, a kitchen, lounge, dining room and meeting room.

A report to the Brighton and Hove City Council Planning Committee suggested that no more than 20 people would be allowed to stay there.

Avante wants to make a number of changes to the outside of the building – removing fire escapes, fitting new railings to the front and Juliette balconies to the back.

The company said that the site would be a good location for visitors to the centre of Brighton and Hove and would not result in the loss of a home.

It said: “The proposal will have a positive impact on the surrounding city centre uses by bringing in new visitors, creating additional tourism footfall and generating customer spending in businesses across the wider shopping area.

“Planning practice guidance now emphasises the importance of enhancing the vitality and viability of commercial centres and identifying the appropriate mix of use required to achieve this – including residential uses and visitor accommodation.”

Green councillor Hannah Clare, who represents Brunswick and Adelaide ward, backs neighbours who have objected to the planning application.

She said: “It is on the boundary of a residential part of Holland Road and many residents have written to me to express their concern about noise.”

She said: “This new visitor accommodation is proposed in Hove and therefore not consistent with this approach.” 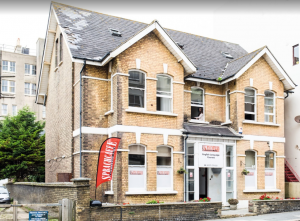 One objector, whose details were redacted on the council website, said: “I note the applicant has a party business by way of a limited company ‘Stagfleet Limited’.

“The name of this company somewhat indicates the applicant’s area of business and therefore the use as a party house is to me clear.

“And as the council acknowledged in 2019, with a motion asking for powers to control party houses because of all the problems, I request the Planning Committee to decide this, because of the previous council problems with party house use.”

Avante’s director Robert Webb, 73, is also a director of Stagfleet, a “management consultancy” best known for buying the Brighton gay club Revenge for £1.5 million in 2004.

Mr Webb is also a director of a number of Brighton restaurants including Food for Friends, Opposition and Zahara.

Another anonymous objector said: “Having investigated further the planning application, it is clear that 10-bedroom unmanaged visitor accommodation with communal dining, kitchen and meeting area is certain to attract very large groups of younger visitors, most likely stag/hen groups.

“It is obvious that the noise/nuisance of this sort of property would be unacceptable in a predominately residential road and is an inappropriate use of the building.”

A report to councillors recommends approving the plans at a meeting of the Planning Committee next Wednesday (7 April).

The meeting is due to start at 2pm and is scheduled to be webcast on the council website.