A police dog helped officers catch a suspected burglar after a break-in at a building site in Hove. 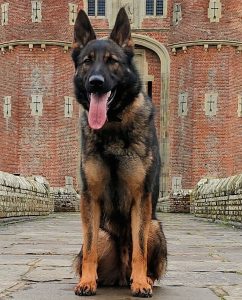 Sussex Police said this afternoon (Tuesday 20 April): “Officers from the Brighton Neighbourhood Response Team were assisted by PCSOs and the Tutor Unit as they responded to the incident in School Road at about 10.27pm on Thursday 8 April.

“The Dog Unit also attended and helped to contain the area.

“Two suspects were seen to run off, before climbing scaffolding to get over a 15ft fence which led to another part of the site.

“They managed to break cover, having climbed on to roofs of residential properties, and began to garden-hop. Police gave chase but the suspects were lost.

“From this point, PD Hox, a 20-month-old German shepherd general purpose dog, was tasked to search for the suspects, which led to a teenager discovered hiding behind a nearby garden wall shortly afterwards.

“The 15-year-old local boy was arrested on suspicion of burglary and released under investigation, pending further inquiries. Nothing has been reported stolen to date.”

Hox’s handler, PC Gareth Evers, said: “Hox is a cheeky chappy who is very driven to work. He is very playful and friendly at home but switches into work mode, becoming very focused, as soon as he sees me in uniform.

“Hox and I have been together since June 2020 and completed our Initial course together in October 2020.