The Greens have won the Hollingdean and Stanmer by-election, taking a seat formerly held by Labour. 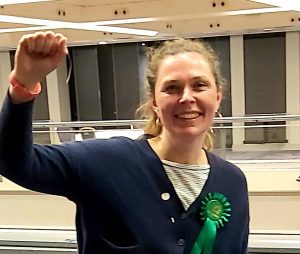 Zoë John’s victory gives the Greens two out of the three seats in the electoral ward.

And the Greens now have a total of 20 out of 54 seats on Brighton and Hove City Council where it remains the largest party.

The votes cast were …

There were 47 rejected ballot papers.

The seat became vacant with the resignation of Labour councillor Tracey Hill.

The Hollingdean and Stanmer ward has three seats. The other two are held by Labour councillor Theresa Fowler and Green councillor Martin Osborne.

Despite the slightly lower turnout, the Conservative candidate, Dr Emma Hogan, who listed on the ballot paper under her married name, almost doubled the Conservative vote compared with the last election two years ago.