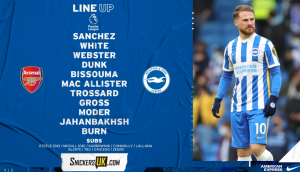 The Seagulls conclude a Premier League season at Arsenal for the second time in three years and will try, as they did in 2019, to thwart the Gunners’ European aspirations.

A few eyebrows may be raised as Graham Potter again names two goalkeepers on the bench – this time Tom McGill alongside Jason Steele.

And with no recognised front man – Neal Maupay is suspended and Danny Welbeck is injured – Potter looks likely to play Alireza Jahanbakhsh and Leondro Trossard up front together.

Lewis Dunk returns from suspension and Aaron Connolly and Percy Tau are both on the bench.