Councillors have unanimously approved the designs of 45 houses which are planned for a field in Rottingdean.

The £20 million scheme, in Meadow Vale, off Ovingdean Road, Rottingdean, secured planning permission on appeal in 2018.

Today (Wednesday 9 June) councillors were asked to agree the proposed designs, having approved an amended layout for the plot in March.

She told the council’s Planning Committee that the images provided by Brookworth Homes, the developer, showed identical red-brick houses.

But when the Planning Committee met at Hove Town Hall today, they were shown a variety of styles and materials including dark weatherboarding, flint and tiles.

Labour councillor Daniel Yates asked about the inspiration for the designs and was told that it came from buildings in the area with similar features.

Green councillor Leo Littman said that the dark weatherboarding reminded him of the tall huts for drying fishermen’s nets in Hastings.

Independent councillor Bridget Fishleigh asked the developer to consider the impact on people living in the area.

On the first day of lockdown last year, she said that the developer’s trucks rolled into Saltdean to build homes and the experience had been horrendous for residents.

She asked the developer to ensure that if construction workers and suppliers arrived early, before the 8am start time, they turned off radios and did not leave their vehicles running.

Councillor Fishleigh said: “I’d like to request semi-mature trees are planted at this site instead of hundreds of stick trees which cannot survive on such a windy site (and) that native grass is planted that can cope with the chalkland.

She also asked for “the lighting plan” to be “revisited because it is on the edge of the national park and new street lighting will cause light pollution”. 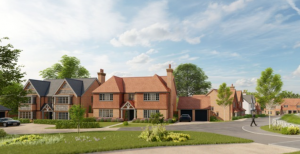 She added: “In the last hundred years, lighting technology has moved on – and there is no reason to have super-high lamposts anymore when we can have bollard style lower-level ones.”

Conservative councillor Carol Theobald said that she did not want houses on the site as she much preferred the horses on the field.

But, she said: “As it’s been granted, I do think the houses look quite attractive. Apart from the terraces, they could be improved and made more interesting.”