Brighton i360 loan payment deferred as debt rises to £45 million

Councillors have agreed to defer a £1.2 million loan repayment from the Brighton i360 because it could cost more if they turned down the request.

They did so after learning that the i360’s total debt to Brighton and Hove City Council was about to top £45 million.

Conservative councillor Steve Bell spelt out his fears about the effect on council’s finances if the seafront attraction were to fail.

He spoke out at a meeting of the council’s Policy and Resources Committee at Hove Town Hall this afternoon (Thursday 1 July).

The committee was told that the i360 had performed well during the coronavirus pandemic – when it was able to operate – compared with other tourist attractions.

The week of the Whitsun bank holiday at the end of May had proved more successful than in 2019, with visitor numbers up – and rising week on week.

Councillor Bell, the Conservative group leader, said that failing to support the i360 could potentially be devastating for the council which had guaranteed a £36.2 million loan.

He said that many of the councillors who had backed the loan – from the Public Works Loan Board – were no longer members of the council.

And the Conservatives had “moved on”, he said, from when they voted with the Green administration at the time.

Councillor Bell, who is also a member of the council’s i360 working group, said that he hoped that people would understand that councillors were not just “nodding” through the deferral.

He said: “We still have to be paying back the Public Works Loans Board because it’s our loan so we are slightly out of pocket.

“I want to assure people what we are doing here is not blindly going along with what the i360 are asking us for.

“But what we are trying to do is protect the residents of the city from what is now a £41 million loan.

“The only way we will see a recovery or return on that money is by working with them.”

Councillor Bell also asked about the council taking over a £4 million loan to the i360 from the Coast to Capital Local Enterprise Partnership (LEP).

He was told that the council would pay nothing to take over the loan but should benefit from receiving the repayments.

Labour councillor Carmen Appich, the joint opposition leader, said that her party had opposed the £36 million loan from the start.

Councillor Appich, who is also a member of the i360 working group, said: “Labour did not support this project and we feel doubtful that the repayment of the original loan would happen unless we extend timescales considerably, with implications around the lifespan of the asset.

“I do think the attraction is doing all they can to maximise income and they have done really well to do that. 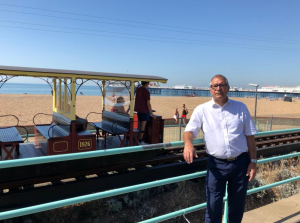 Green council leader Phélim Mac Cafferty said: “We still want the i360 to be successful. We want them to add to the rich set of destinations in our city that can help bring visitors not just once but twice and stay overnight as well.”

Over the past three years, more than £6 million in loan repayments have been missed because the i360 did not make enough money, with visitor numbers falling short of forecasts.

In December 2019, councillors agreed to complete a “loan restructure” with the i360 – reducing the coming instalments to give the business a better chance of paying off the overall £36.2 million loan.

But the covid lockdowns made it unrealistic to finalise the deal – and now, according to a council report, interest on the i360’s debt has pushed the outstanding sum up to £41 million.

When the £4 million loan is transferred from the LEP, the i360 will owe the council more than £45 million.

The loan restructure is expected to be completed before the next payment date in December.