Don’t celebrate too soon on cycle lanes: Labour may yet abstain again

Brighton and Hove News reports that Labour, which introduced the Old Shoreham Road cycle lane in May last year, have now said they are against it.

The Remove the A270 Cycle Lane group has celebrated the news and their spokesperson Rob Arbery has gone as far as issuing a public statement congratulating the Labour Party.

But I have a word of caution to Mr Arbery and others who want to see the cycle removed: don’t celebrate too soon or take your eye off the ball.

If the past is any predictor of the future, you and your group will need to be vigilant until the votes are cast at the special council meeting to decide this matter on Wednesday 21 July.

Labour are the great abstainers. It’s been one of the recurring themes of this council over the past two years – the Labour Party making a strong statement that they are against something, only then to abstain when it comes to the vote, allowing measures to go through anyway on the back of Green support.

As reported by this news site, this has happened twice in the course of the past few months on controversial issues which have serious implications for the city.

In the vote on parking permit rises, Brighton and Hove News reported: “The ruling Greens voted for the higher charges and the Conservatives voted against while Labour abstained, having criticised the proposed increases.”

The result of Labour’s abstention was that the outrageous parking permit price rises went through because of the votes of the Greens – and residents across the city have now been hit with parking permit hikes in excess of 30 per cent in some wards.

Labour then did this all over again at the last council meeting – this time on the highly controversial Homeless Bill of Rights.

Some Labour councillors were against it but when it came to the vote they abstained rather than joining with the Conservatives in voting against.

Now, Brighton and Hove City Council is the only council in the country to allow begging and tents in every part of the city as a “right” and our city has a policy at odds with the police.

Labour’s abstentions in these two matters looked like a lack of courage and they allowed the Greens to have their way.

So given this, how confident can we be that Labour will, at the fifth time of asking, finally join with the Conservatives and vote to scrap the temporary Old Shoreham Road cycle lane when the “active travel” package comes before councillors next week?

Remember, Labour councillors have told residents many times in the past year that they are against the Old Shoreham Road cycle lane – including as far back as August last year – but still found a way to vote four times to keep it in place in that time. 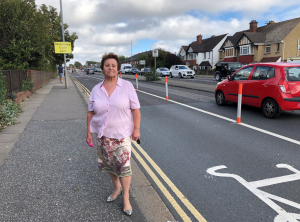 Also remember, the meeting to decide whether to scrap the Old Shoreham Road cycle lane next week will be attended by only three councillors because the Greens do not want full meetings to proceed at the moment.

And the “active travel” document to be voted on is long and complex with many different parts:  there will no doubt be “wiggle room” for Labour to back out or fudge their votes.

Look very closely at Labour’s statement – it contains no iron-clad commitment on how they will vote, only that they “intend” to make a “demand” of their coalition partners, the Greens, that they consider alternative cycle lane routes.

I, for one, am taking no chances. I will be presenting my joint petition with Councillor Nick Lewry urging the council not to close Stapley Road – one small part of the Labour and Green Old Shoreham Road experiment – on Thursday night (15 July) at the meeting of the full council.

My residents want this cycle lane removed in its entirety – including all its component parts and the tacked on road closure schemes.

Mr Arbery, please do not celebrate too soon – Labour do not deserve your congratulations just yet. Hold your congratulations until they finally have the courage to vote with the Conservatives to remove the Old Shoreham Road temporary cycle lane scheme in its entirety. Nothing less will do.

Make sure your group stays vigilant and keeps the pressure on Labour to follow through on their words at the special meeting next week.

If Labour abstains, the Greens will get their way once again and we will be stuck with this unwanted cycle lane for another two years.

Councillor Dawn Barnett is a Conservative member of Brighton and Hove City Council. She represents Hangleton and Knoll ward.