It’s been a long time, but full capacity is back, with Robert Plant’s Saving Grace 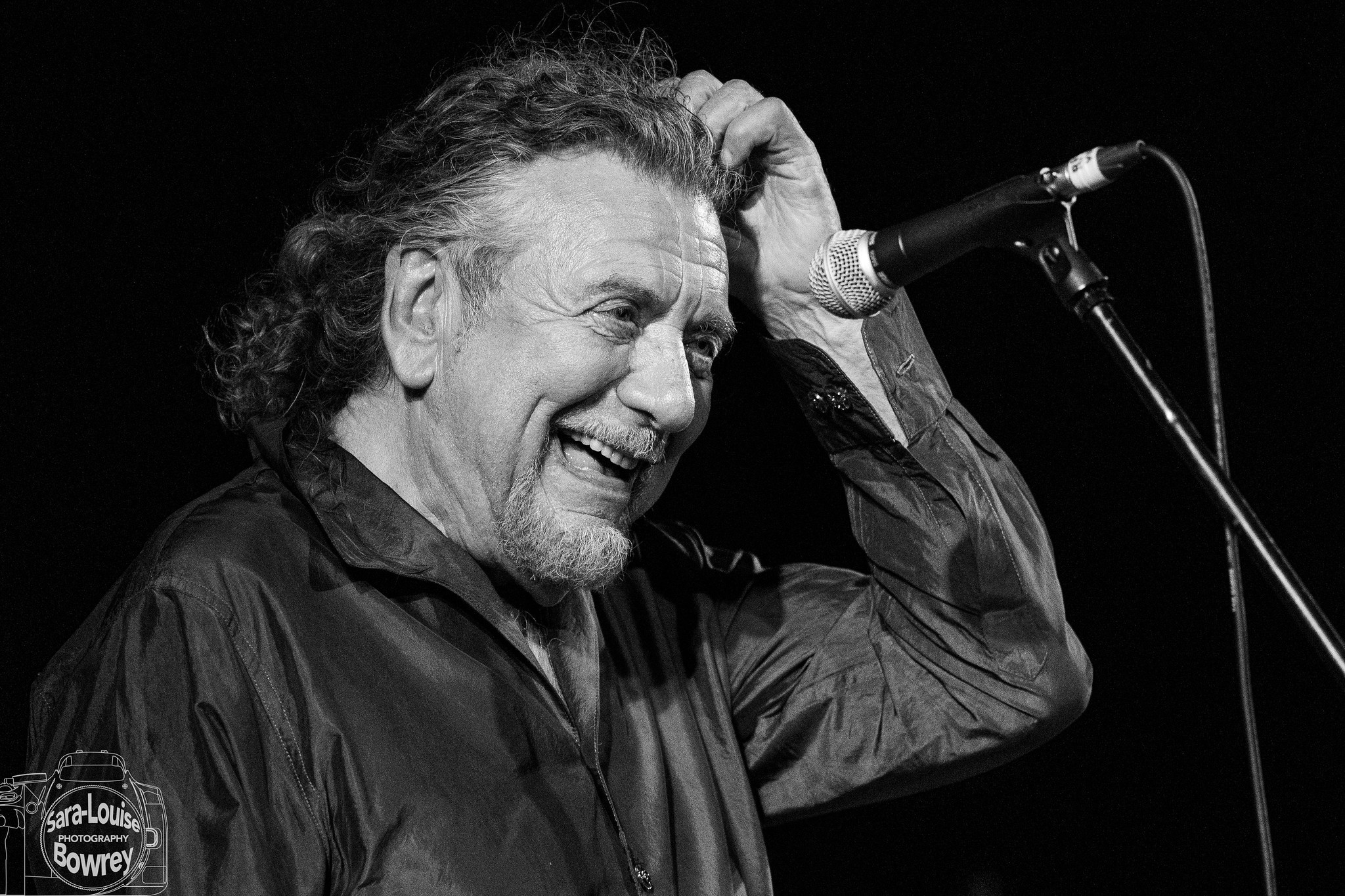 As frontman of rock legends Led Zeppelin, Robert Plant has an indisputable place in the pantheon of all-time vocal greats, and a varied and successful solo career spanning the subsequent decades.

The most recent of his many projects is an acoustic band, Saving Grace, playing an eclectic selection of folk, blues, country and gospel covers, and the occasional Plant original. For someone who could be filling a stadium, this is a relatively low-key operation, touring smaller venues in less obvious locations. The inclusion of the iconic De La Warr Pavilion in Bexhill-on-Sea caused a considerable flurry of excitement in the area, and the event sold out quickly. 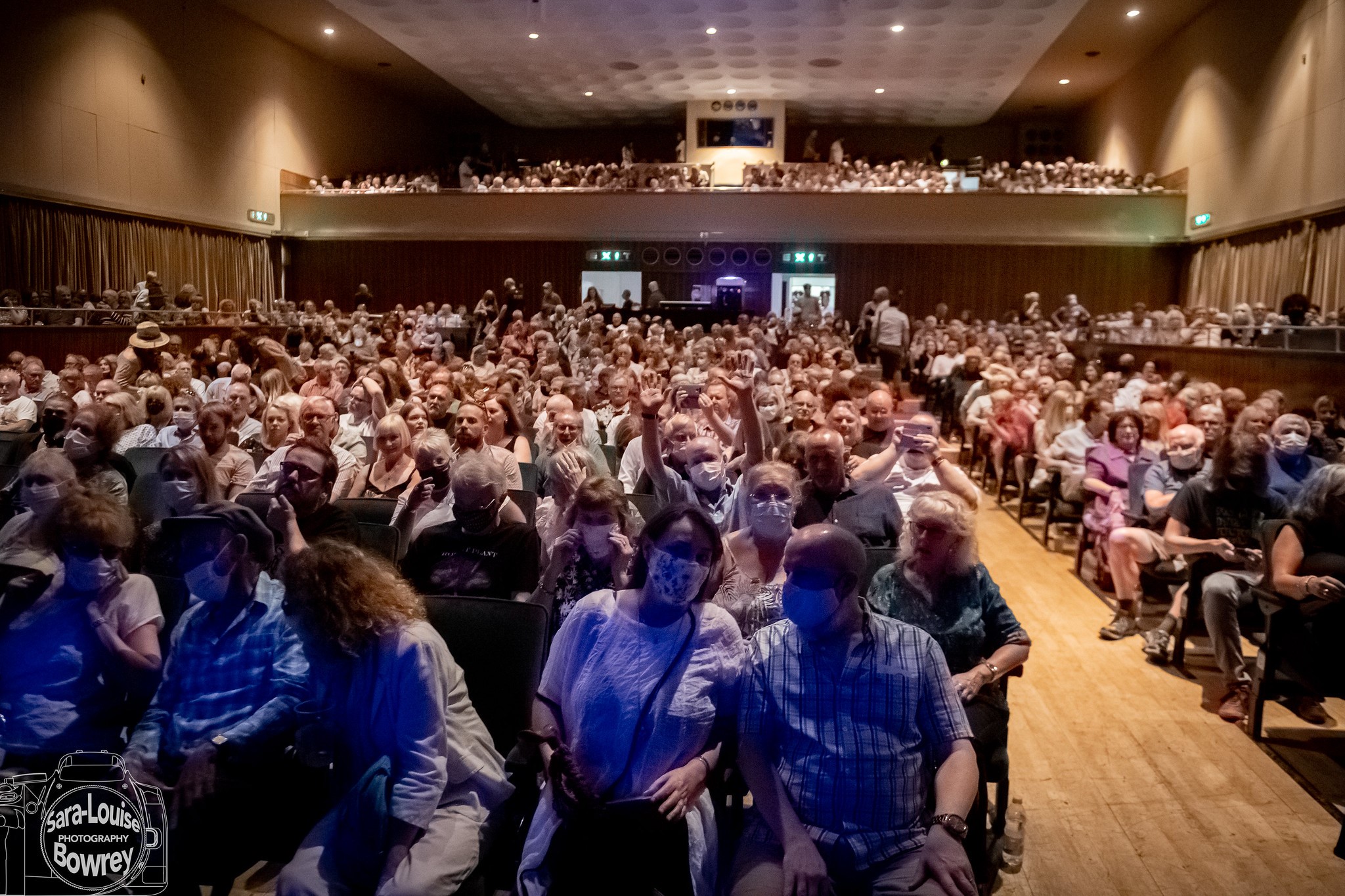 Tonight’s audience – are you there? (pic Sara-Louise Bowrey Photography) (click on pic to enlarge!)

It’s the second day since the removal of pandemic restrictions, so gathering in a crowd for a full capacity event is something of a novelty. The venue is well organised, with plenty of helpful staff to assist the free flow of patrons. Most people are voluntarily wearing face coverings whilst moving around inside, and there’s a spacious bar area out on the terrace to enjoy the sunshine of a warm July evening. 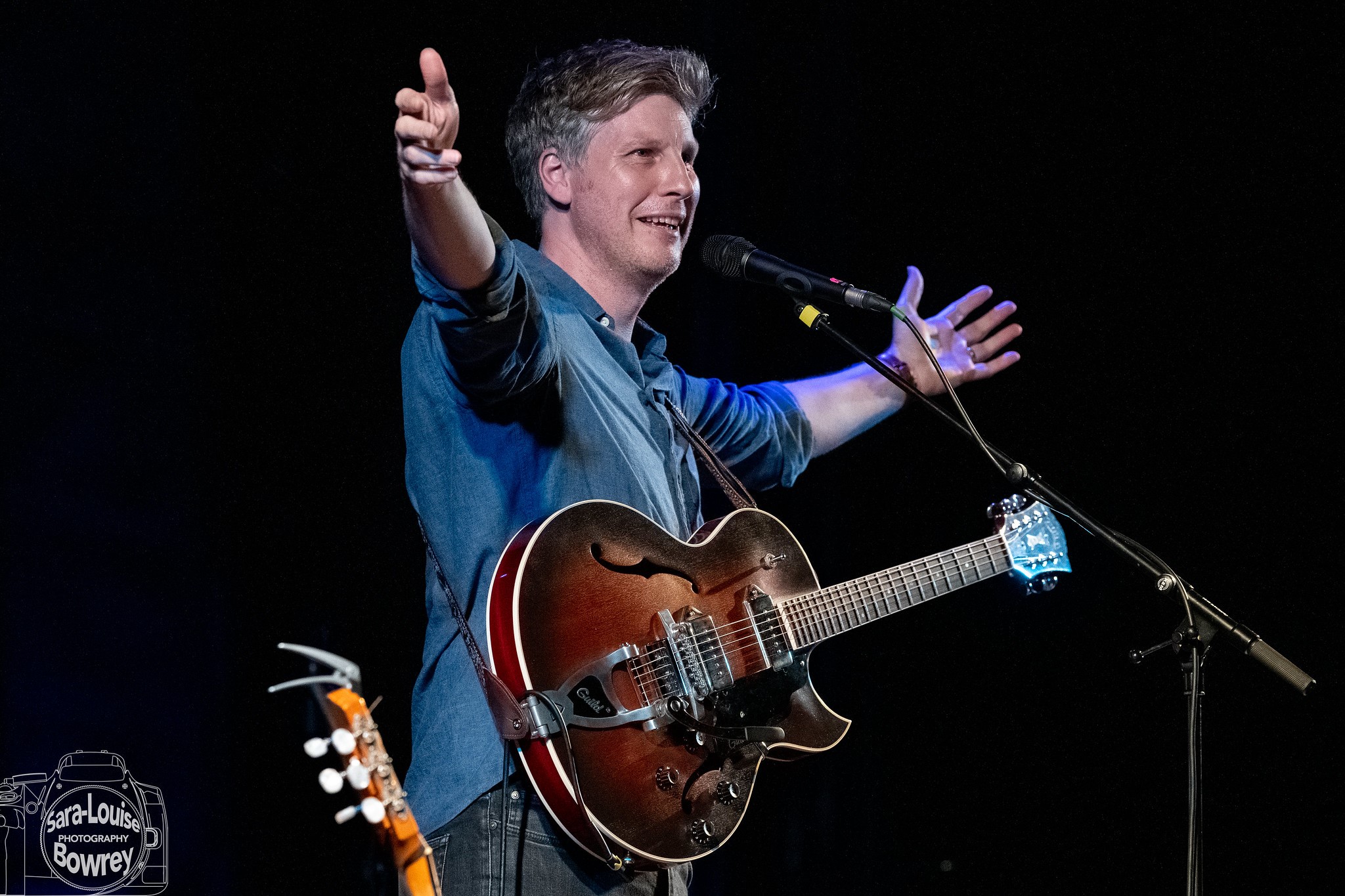 First up in the hall tonight is indie-folk singer-songwriter Scott Matthews, one man with an extensive rack of guitars. His debut album, ‘Passing Stranger’ won critical acclaim back in 2006, with lead single ‘Elusive’ picking up an Ivor Novello songwriting award. Originating from Wolverhampton, he has been championed by Robert Plant (famously from the Black Country himself) who contributed vocals to a track on the follow up ‘Elsewhere’ in 2009. With six further albums released, there is a considerable back catalogue to draw on.

“Live music!” Scott exclaims, flinging his arms open to the audience, who respond with a loud cheer. A tall figure in a blue shirt and black jeans, he sports a clean cut look with his hair cut short. Strapping on a Guild semi-acoustic with a gorgeous dark wood finish, he launches into opening number ‘Virginia’. The sound is ambient and vibey, with a minimal backing of electronic drone, presumably supplied via a pedal. Vocal and guitar are both drenched in a massive reverb. “Give me something I can dream about,” the lyric implores, and it feels like a dream to be sitting watching a performance in the company of a large crowd. 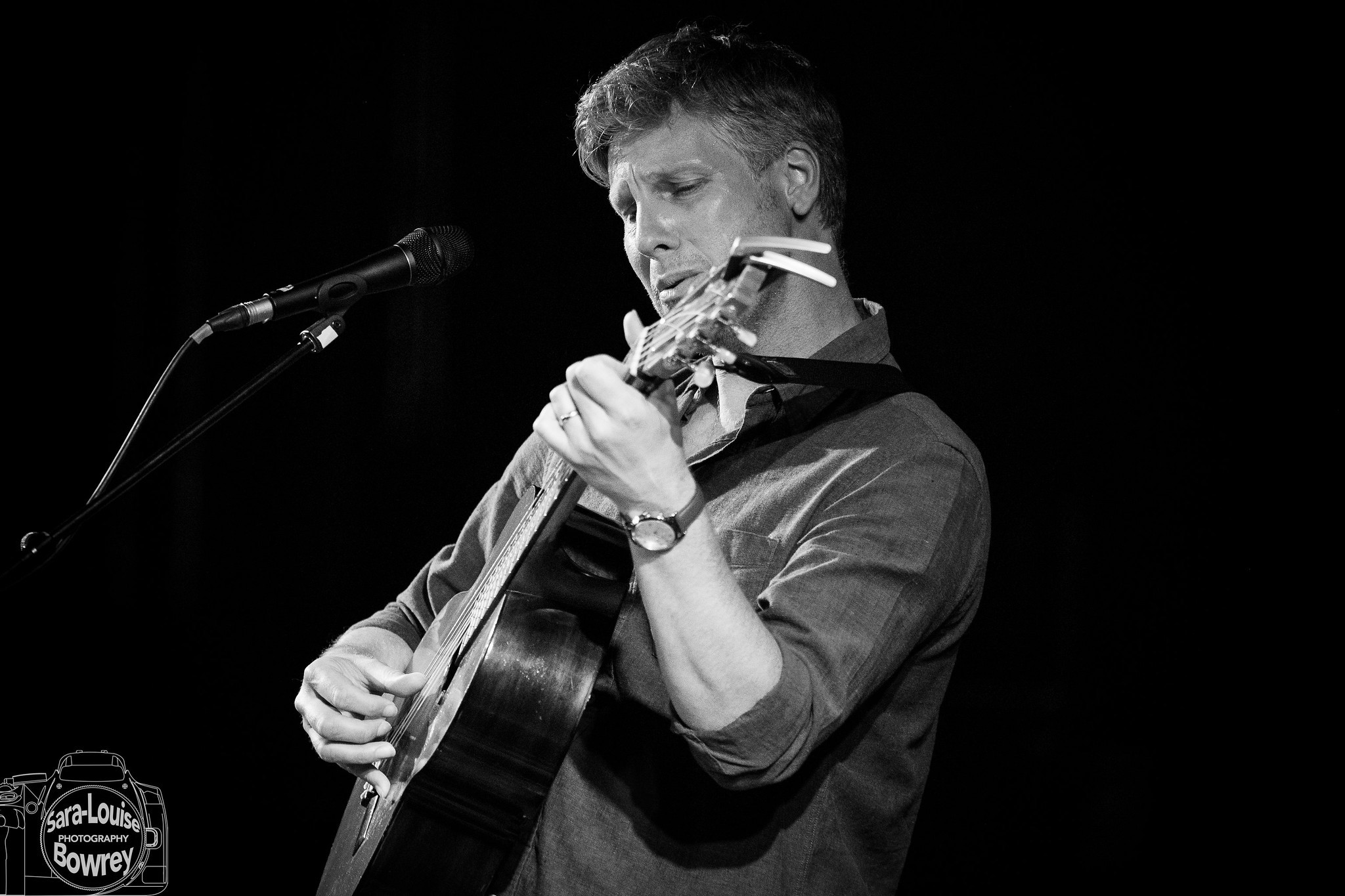 There seem to be guitar changes for every song: an amped acoustic, a twangy 12-string, some alternative tunings. I’m pleased to see the hard working guitar tech Ady Johnson get thanked and introduced to the crowd.

The standout tracks for me span both ends of Scott’s discography. ‘Intruders On Earth’, from current album ‘New Skin’ is soaringly atmospheric with Spanish guitar arpeggios and a melody reminiscent of the vocal style of Thom Yorke from Radiohead. ‘Passing Stranger’, from the debut album, is a beautifully written song with a lovely progression, its bluesy style reminding me of Ben Ottewell of Gomez. The lyric is a cracker too: “The coffee you poured me is cold, the paper I’m reading is old, and that smile is not your own.” It has been a very impressive start to the evening. 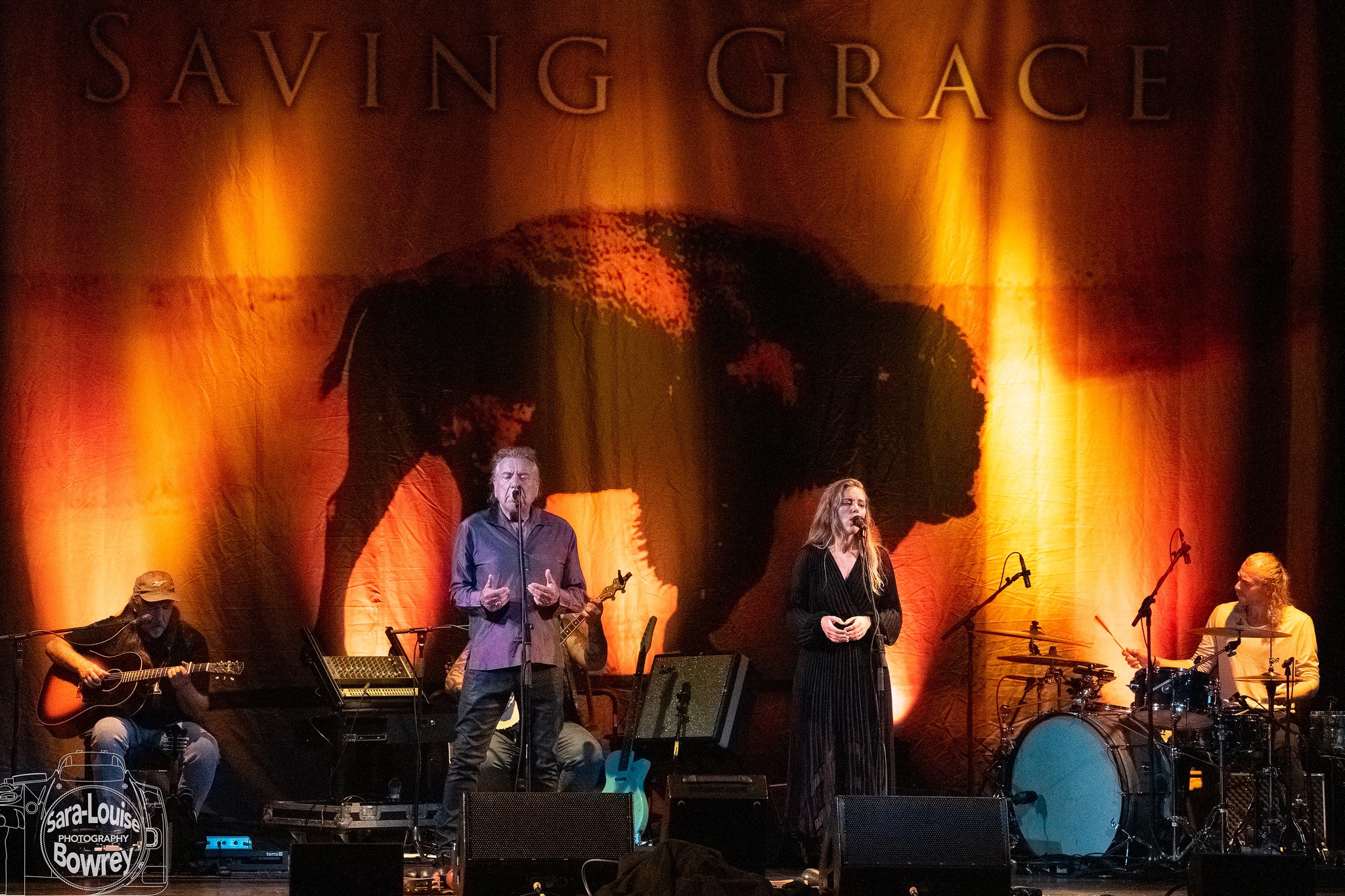 The terrace bar is doing a brisk trade during the interval, and there’s a palpable buzz of excitement in anticipation of seeing a genuine legend perform. Back in the hall the stage is set, with a large backdrop with a bison motif, and as the lights dim and the intro music starts up, it’s time for Saving Grace.

The instrumentalists take their places to loud applause, and launch an exotic sounding groove with banjo, percussion and mandolin. Robert Plant and Suzi Dian enter from house left and right respectively to rapturous cheers from the ecstatic crowd and we’re into the first number, a cover of Clarence Ashley’s ‘Cuckoo’. The dual vocals mesh superbly, and an effervescent banjo line dances over skittering percussion and a thudding kick drum. It’s clear we’re in for a special treat tonight. The mesmeric dual vocal continues through a version of ‘Gospel Plow’. 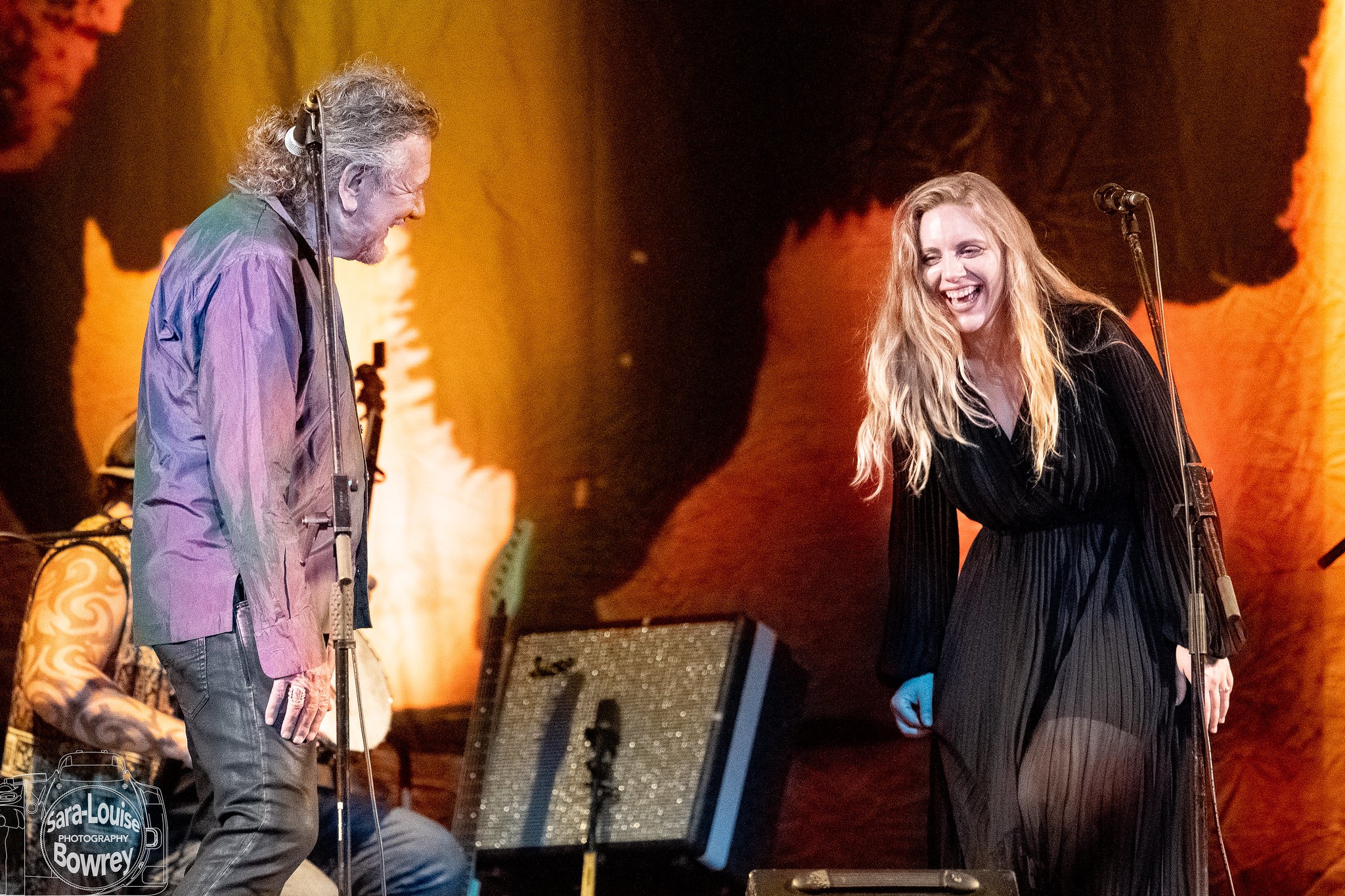 “Just another night,” quips Mr Plant, who is clearly delighted to be back gigging after a nineteen month enforced hiatus. There’s a change of mood for ‘Move Along Train’, led by an insistent snare drum rhythm by Oli Jefferson, house right behind a black kit. Two players are seated at the back of the stage, both with an array of instruments set ready to use, including acoustics and long-necked electric baritone guitars. Tony Kelsey, who started the set on mandolin, sits hunched over in a dark t-shirt, long hair cascading from beneath a baseball cap. Bearded banjo player Matt Worley, his black vest revealing extensive tattoos, takes the lead in a call and response vocal section. In this instance the response is provided by Robert Plant, looking fine and dandy in a blue satin shirt, his trademark curly mane tied back, and Suzi Dian, with flowing blonde hair and a floaty black dress.

“Welcome to the Black Country.” The great man is in a jovial mood. “We’re Saving Grace, and we come from the land of the ice and snow,” a Zep reference that raises a chuckle. The numerous fans in the audience prick their ears up as a monumentally awesome rendition of ‘Satan Your Kingdom Must Come Down’ segues into Blind Willie Johnson’s ‘In My Time Of Dying’, famously covered on the 1975 Led Zeppelin album ‘Physical Graffiti’. The twin baritone guitars sound sublimely massive.

Every number is an absolute winner, performed by musicians at the very top of their game. The introduction to a Moby Grape number brings some fond reminiscences of the 1960s music scene. Suzi takes the lead for ‘Too Far From You’, with Robert standing behind the two guitarists, together providing a formidable wall of backing vocals. There’s an eastern feel to Low’s ‘Everybody’s Song’, with the effects on Matt Worley’s cuatro producing a sitar-like sound, and ‘Two Coats’ is especially vibey, with Suzi adding a low drone on an accordion. There’s plenty of amiable chat between songs, often providing background on their origins, which is a musical education in itself.

Great numbers just keep on coming. ‘Cindy I’ll Marry You Someday’ has another beautiful dual vocal driven along by a thumping floor tom. Given how good they sound, I’m surprised baritone guitars aren’t more widely used. The longer necks enable them to be tuned lower than standard. Both players are using them for Donovan’s ‘Season Of The Witch’. Suzi takes the lead vocal while Robert gets busy with some maracas. Oli adds rim shots and big tom hits, and Tony turns in another blistering solo. 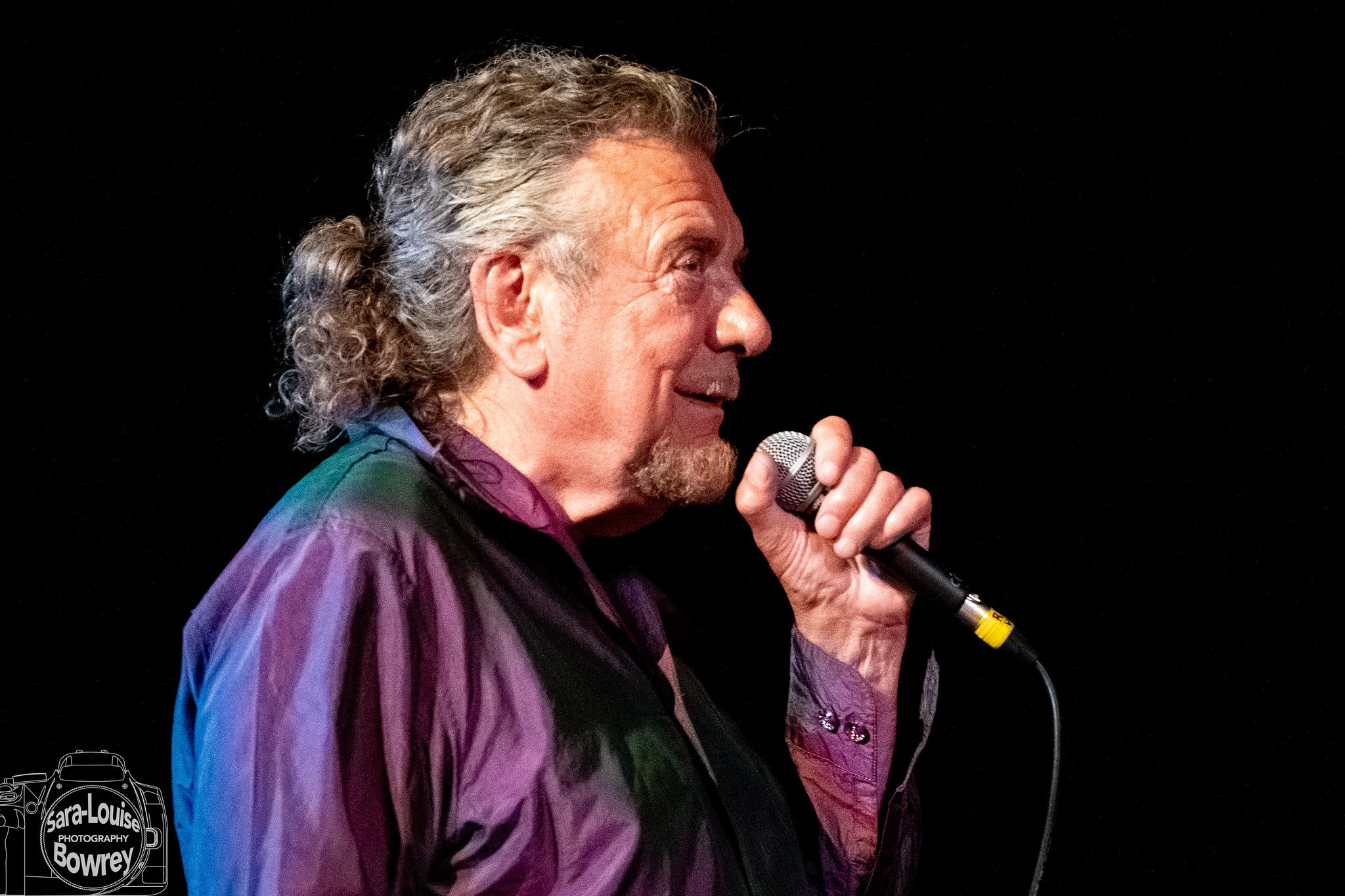 “Here’s a song I wrote with…somebody else,” introduces the final number of the set, ‘Please Read The Letter’, from Page and Plant’s 1998 album ‘Walking Into Clarksdale’, famously reprised with Alison Krauss on ‘Raising Sand’ in 2007. It’s a beautiful song, and this rendition is simply magnificent. The comically drawn out ending raises a laugh and huge applause.

“I didn’t know King Offa had left the West Midlands,” quips Robert as he bids us goodbye. The singer has a noted interest in the Welsh Marches, and has clearly spotted that the Mercian king (responsible for ‘Offa’s Dyke’) crops up in street and school names in Bexhill. King Offa conquered the South Saxons in 771 AD, and subsequently named Bexhill (Bixlea) in a charter he granted. Tonight a different kind of Midlands royalty has peacefully won over the people of Sussex, and they are loving it. An insistent and surprisingly in-time handclap brooks no argument in calling for an encore.

The band returns with Robert looking relaxed, glass of wine in hand, and we are treated to a superb version of Sam Amidon’s ‘As I Roved Out’, with banjo and baritone guitar conjuring a vibe reminiscent of ‘Kashmir’.

“We like to go places we’ve never been before… like here!” is the final quip. “You’ll never leave!” retorts some wag in the audience, League Of Gentlemen style, and the evening concludes with a cover of ‘Angel Dance’ by Los Lobos.

It’s been a long time, as they say, since we’ve had full capacity live music events, and what a way to get back into it. Tonight it felt like an absolute treat to be witnessing a superlative performance by a band of top quality players, featuring a bona fide musical legend. 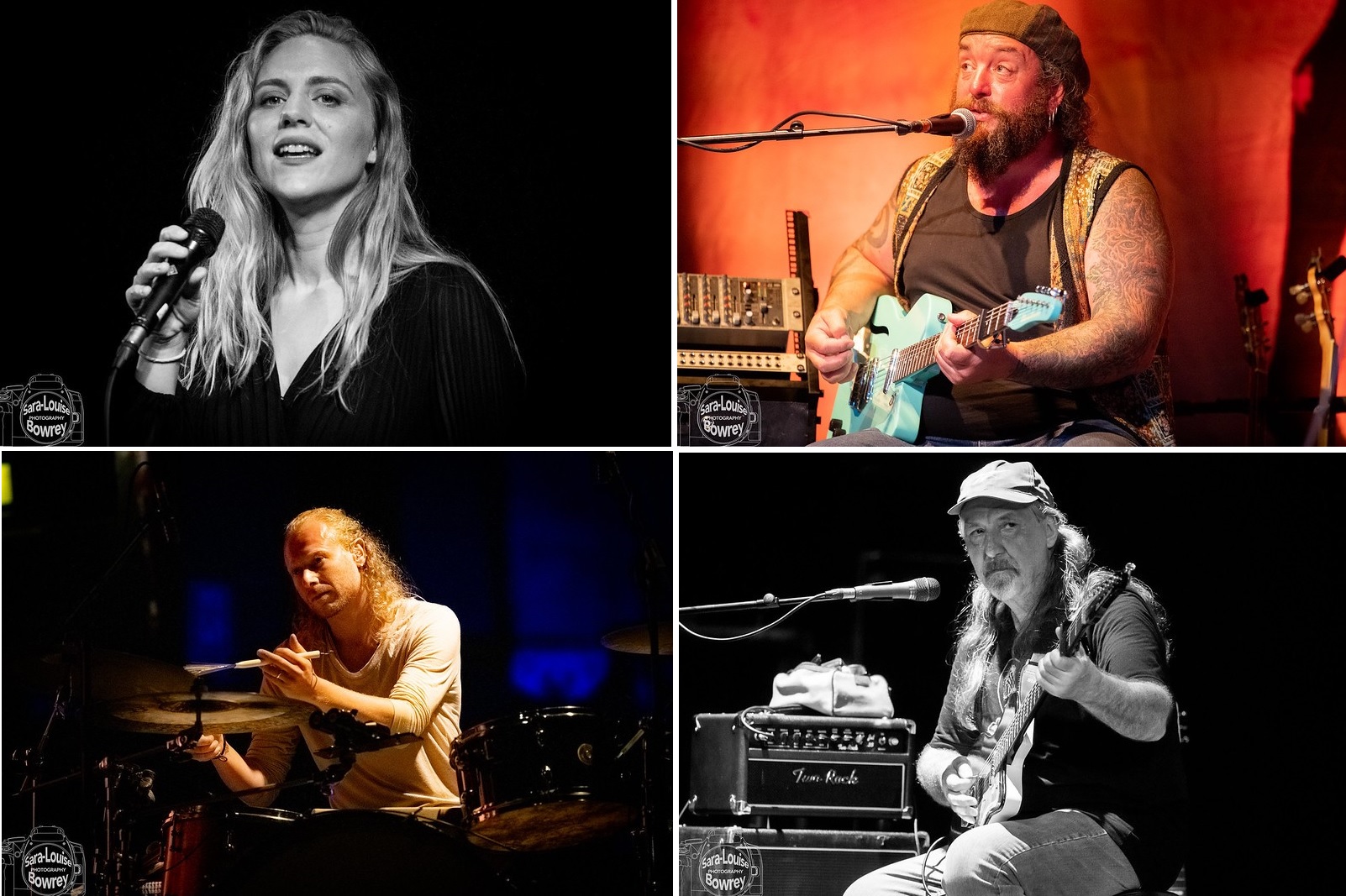 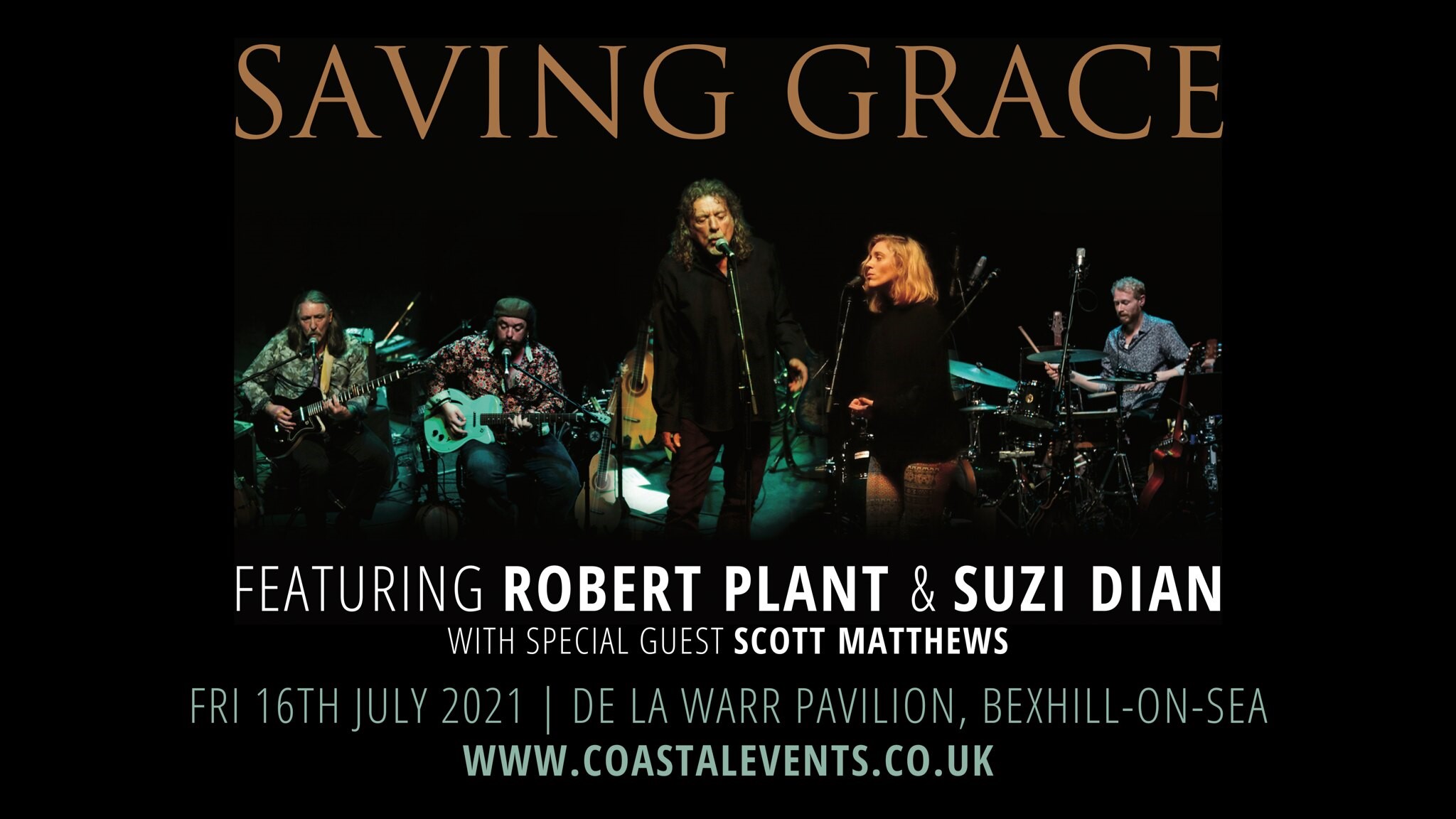