Chalk dumped in a car park can be used to create a barrier after councillors unanimously backed an application to move it to a better position.

Brighton Footgolf, based at the Benfield Valley Golf Course, secured planning permission to build bunds along the car park boundaries after tonnes of chalk was dumped there by a rogue builder.

Brighton and Hove City Council served an enforcement notice on the owner Benfield Investments in March after the chalk had been there for at least three months, damaging some of the vegetation.

The informal car park, which does not have marked spaces, is next to the Benfield Valley Site of Nature Conservation Importance, and some of the chalk had encroached on to this area.

At a meeting of the council’s Planning Committee on Wednesday (4 August), Conservative councillor Dawn Barnett objected to plans to resurface the car park and create bunds, to be seeded with downland wildflowers.

Councillor Barnett, who represents Hangleton and Knoll ward, said that the situation was a “business deal gone wrong”.

She said that the rogue builder had permission to use the site on a temporary basis to bag up the chalk but disappeared after dumping it.

Councillor Barnett said: “When the council told them to tidy up the area, they went in with a dumper truck and scooped out lots of vegetation where we had hedgehogs, dormice and slow worms living. It destroyed their environment completely.

“They were supposed to keep the trees and shrubs and hedging in the premises in good order … but they didn’t. They ripped out the hedges and shrubs where the birds were nesting.”

She said that the situation had caused a great deal of distress in the community.

Martin Carpenter, from Enplan, Benfield Investments’ agent, said that only part of the site was within the local wildlife site.

County ecologist Kate Cole said that the dumped chalk had encroached on trees causing damage – and Benfield Investments had agreed to replace three. Some scrub may have been damaged but it was expected to recolonise the area.

She was asked about the environmental damage by Labour councillor Daniel Yates and told him: “The geology in the area is chalk so if you can have shallow bunds around the edge which are seeded with low-nutrient soil and chalk grassland, that would be beneficial for the area.

“The bunds will also be good habitats for reptiles because they’ll have nice sunny banks that reptiles can bask on. Obviously, you don’t want them to be huge.” 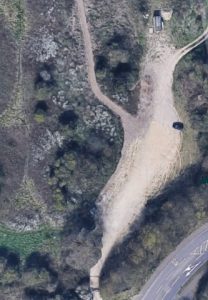 An aerial view of the site

Councillor Yates said that he had initially been sceptical about the application which made an inconvenient event convenient.

“My concern is about a potential precedent it sets for people to be dumping waste chalk around the country and then saying it was because they were anticipating getting planning permission for bunds.”