A British doctor who has been caring for Afghan refugees arriving on flights to British airports from “war-torn” Kabul has described it as a “humbling” experience. 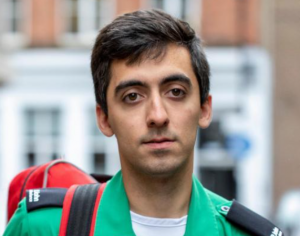 Luke Tester, an A&E doctor in Brighton, said that treating families who had fled the now Taliban-controlled country was unlike anything he had experienced before.

The 27-year-old, who signed up to help with St John Ambulance, told the PA news agency: “Walking into a terminal and seeing hundreds upon hundreds of people who have been through absolute turmoil was very emotional.

“Many have been arriving dehydrated and malnourished, as well as exhausted, after days waiting outside the airport in Kabul, where they had been exposed to the elements while they tried to secure their passage to safety.

“But it’s the disabled and young who have been worst affected.

“I treated a three-month-old baby who arrived very ill, she had been through a hell of an experience for someone so young.

“I later had the pleasure of reuniting her with her worried family, which was wonderful.

“Not only had this family just narrowly escaped from a deadly, war-torn city, they’d also had all their possessions stolen – clothes, jewellery, mementoes: everything gone – while queuing at Kabul Airport.

“I can’t imagine the suffering they must have gone through.”

The charity has been supporting hundreds of refugees since Monday as they arrive in the UK from Afghanistan via Birmingham and Manchester airports, supplying first aid volunteers and ambulance crews.

Dr Tester said: “I saw the horrendous scenes in Kabul on TV and just wanted to play a part and offer expert medical care but also simply give a warm welcome to these poor people after their tumultuous and terrifying journey.

“It’s been a real privilege, and it’s been humbling. I feel very proud and inspired by the humanity I saw there.

“People exhausted and ill having gone through the unimaginable but still comforting each other. Children who realising they’re safe are beginning to play and smile again.

“There’s been such amazing support for these people from the public, I just hope it continues as they settle and begin building their lives here.”

Several charities have said they have been inundated with donations from the public in response to their Afghanistan appeals.

The British Red Cross said it had been “overwhelmed” by the kindness shown by citizens who have raised more than £1 million to equip refugees with essentials such as food, warm clothing, blankets, shoes and hygiene kits, including soap, nappies and toothbrushes.

The money has also been going to help staff provide emotional support to those arriving and will also support the continuing humanitarian crisis in Afghanistan.