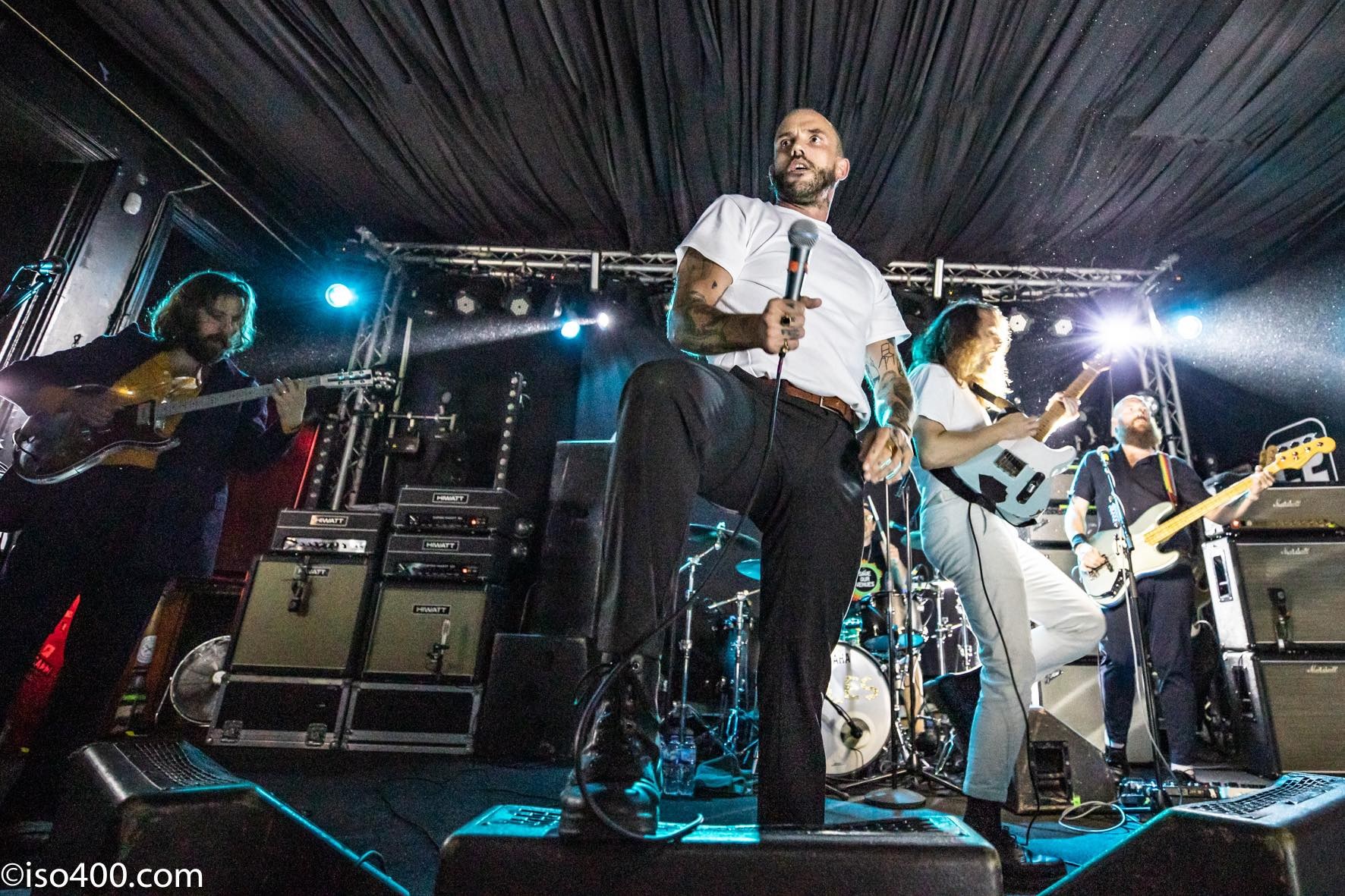 We have waited in Brighton for what seemed like eons for tonight’s performance by ‘world dominating’ Bristol based 5-piece IDLES to take place at the ever-popular Concorde 2. The event was expertly organised by Resident music and local promoters LOUT and was rescheduled from Thursday 15th April 2021 and is in support of their excellent UK No.1 ‘Ultra Mono’ album, which stormed the streets a year ago on 25th September 2020.

This release is as terrific as their previous two studio albums, 2017’s ‘Brutalism’ and 2018’s ‘Joy As An Act Of Resistance’ and certainly cemented the band’s position at the summit of the motorik drumming nouveau punk tree, even if singer Joe Talbot doesn’t see the unit as punk. It has taken them quite a while to gain this lofty height, having formed back in 2009 and worked hard to get to where they are now. 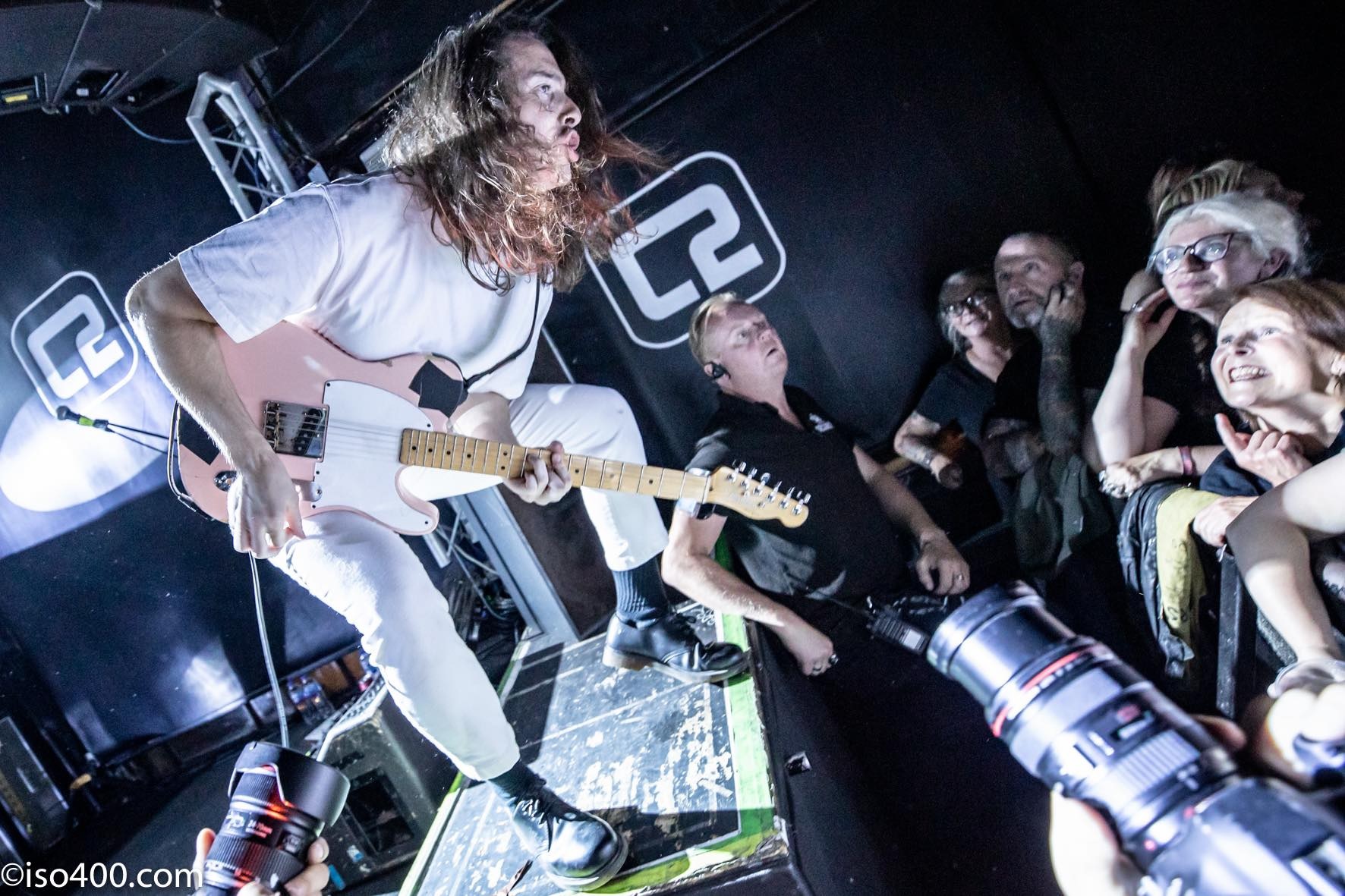 I came on board only five years ago, (23rd September 2016 to be precise) when our paths crossed here at the Concorde 2 when IDLES were bottom of the bill in support of DIIV and Blaenavon. My review of IDLES that night read as thus:

“Tonight’s proceedings were kicked off with an all-too-short half-hour set by a Bristol-based quintet called Idles. If they were to just stand there without playing you would think by the way they looked, that they were about to launch into something from hippydom meets Hawkwind. Nope. They make loud visceral post-punk sounds”.

“Singer Joe looks as though the band just grabbed a passer-by off the street. He does not appear to fit in to their look! But that’s just it, that’s exactly what they wanted to achieve. I mean ‘Dev’ looks like he should be in ZZ Top”.

“I have to say that myself and both my mates agreed that Idles were probably the best band on the night. The punk band The Dead Kennedy’s think so too as they have chosen Idles as their support for their upcoming London shows”.

In fact on reflection they were the best bar on the night by far! 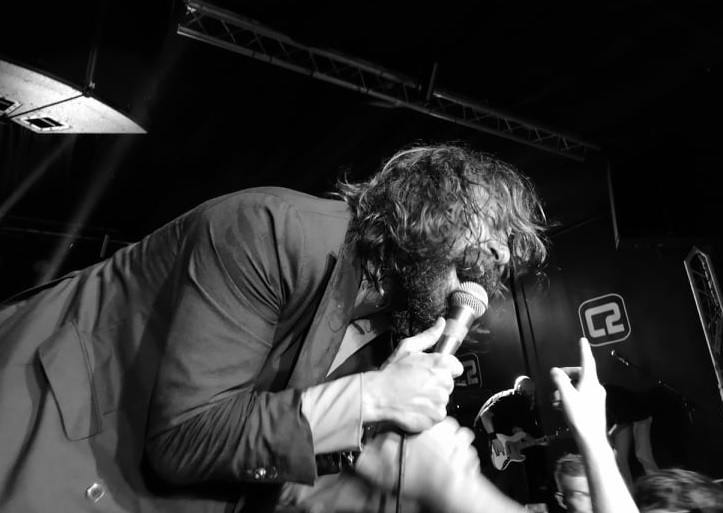 I have been very fortunate to have now seen their memorable concerts on a number of other occasions, some of which includes at The Prince Albert in 2017, The Komedia in 2018 and also with punk legend Jordan Mooney – who is also in attendance this evening – at Brighton Dome in 2019 – Read her exclusive review HERE.

So back to today and the band were arguably feeling invigorated for this performance, especially vocalist Joe Talbot and bassist ‘Dev’, as they posted a photo of themselves flexing their muscles in the sea near the venue around lunchtime. They would certainly have a few hours to endeavour to warm back up prior to taking to the Concorde 2 stage, but if this wasn’t successful, then things were going to heat up for the band this evening. 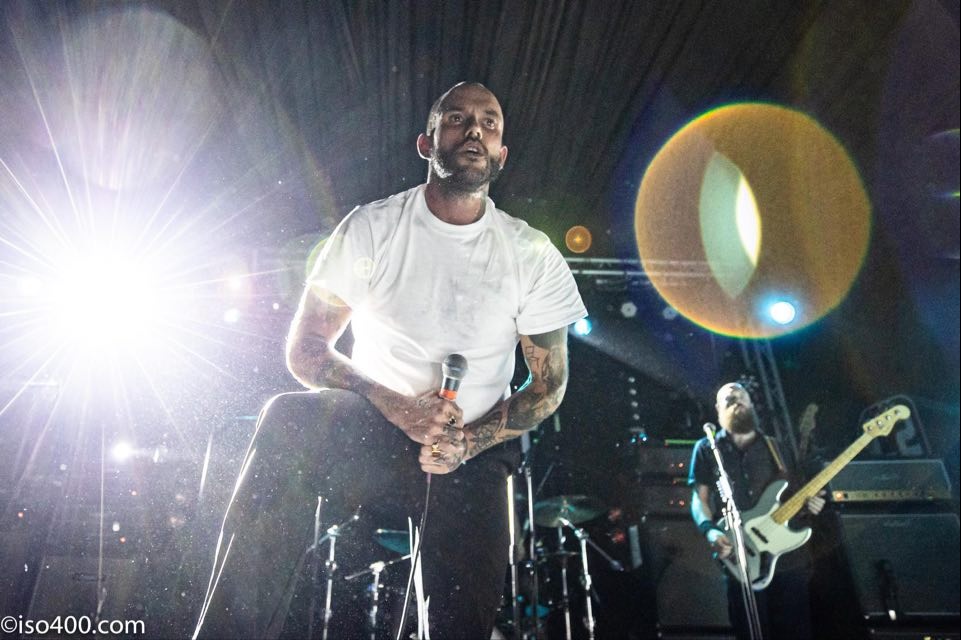 There was no support act tonight as it is a very special ‘outstore’ performance organised by Resident and so at 8:58pm the lights were dimmed and Jon, Adam, Lee and ‘Bobo’ took to the stage.

Bang! Our chests and ears are filled with sonic soundwaves, as they start up the slow grinding opener ‘Colossus’ from their 2018 album ‘Joy As An Act Of Resistance’. Initial reaction was “Christ this is going to be loud” and yes it was, but we were camped right by the front speakers so what do you expect? 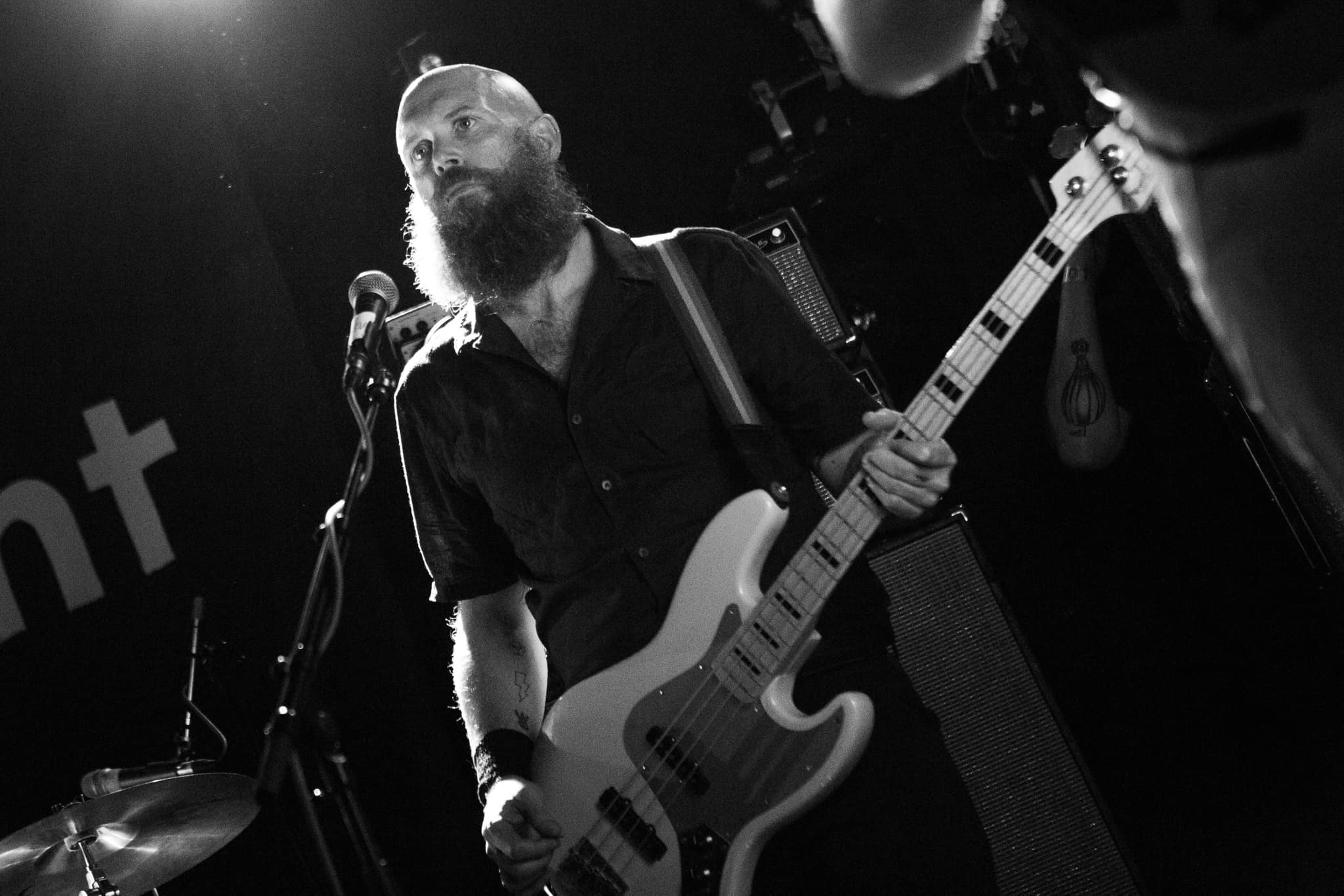 The band had told the Concorde 2 lighting guys to keep it atmospheric and indeed it was, but the handful of professional photographers in the pit at the front were trying their hardest to grab shots in the available light.

On walked frontman Joe and myself and my girlfriend both immediately noted that he had lost a little weight during lockdown as had drummer Jon. Clearly they have been working out during the enforced rest.

It becomes apparent during the fourteen song set, that Joe and his comrades are overjoyed to be back out performing for their fans. And indeed on one occasion Joe slightly burst into tears while talking about being back performing again. The venue was full of their fans as they were there as they had all purchased the No.1 ‘Ultra Mono’ album, thus there was no extra entry fee this evening. This fact was pointed out by Joe, who suggested a stop by their merch stall on the way out to purchase a t-shirt wouldn’t go amiss. It is now rather amazing that IDLES are here at all, as with their current musical standing, they are surely well on the way to be able to sell out venues like the Brighton Centre. Tonight is therefore an up close and personal meeting with them. 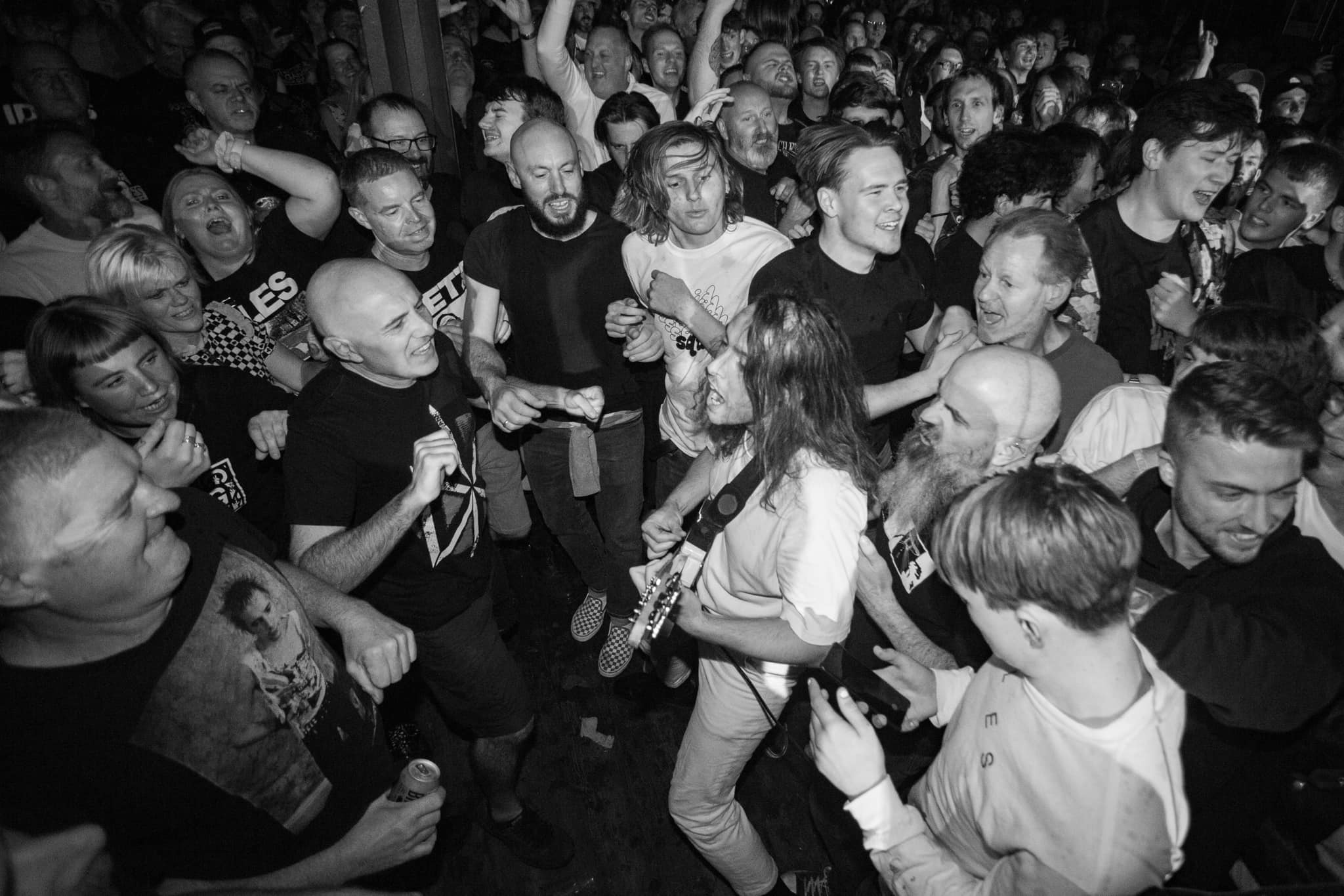 Even from the very off, Joe asked the crowd to split into two halves from front to back, so that when the final faster minute or so of ‘Colossus’ was played, there would ensue a mock moshpit battle. This was the first of several encounters during the night. As you would expect, post covid lockdown, many IDLES fans were letting their hair down for the first time. The band did too, as guitarist Lee joined us during the first number. Yep, it was going to be another one of those IDLES gigs! Very entertaining! 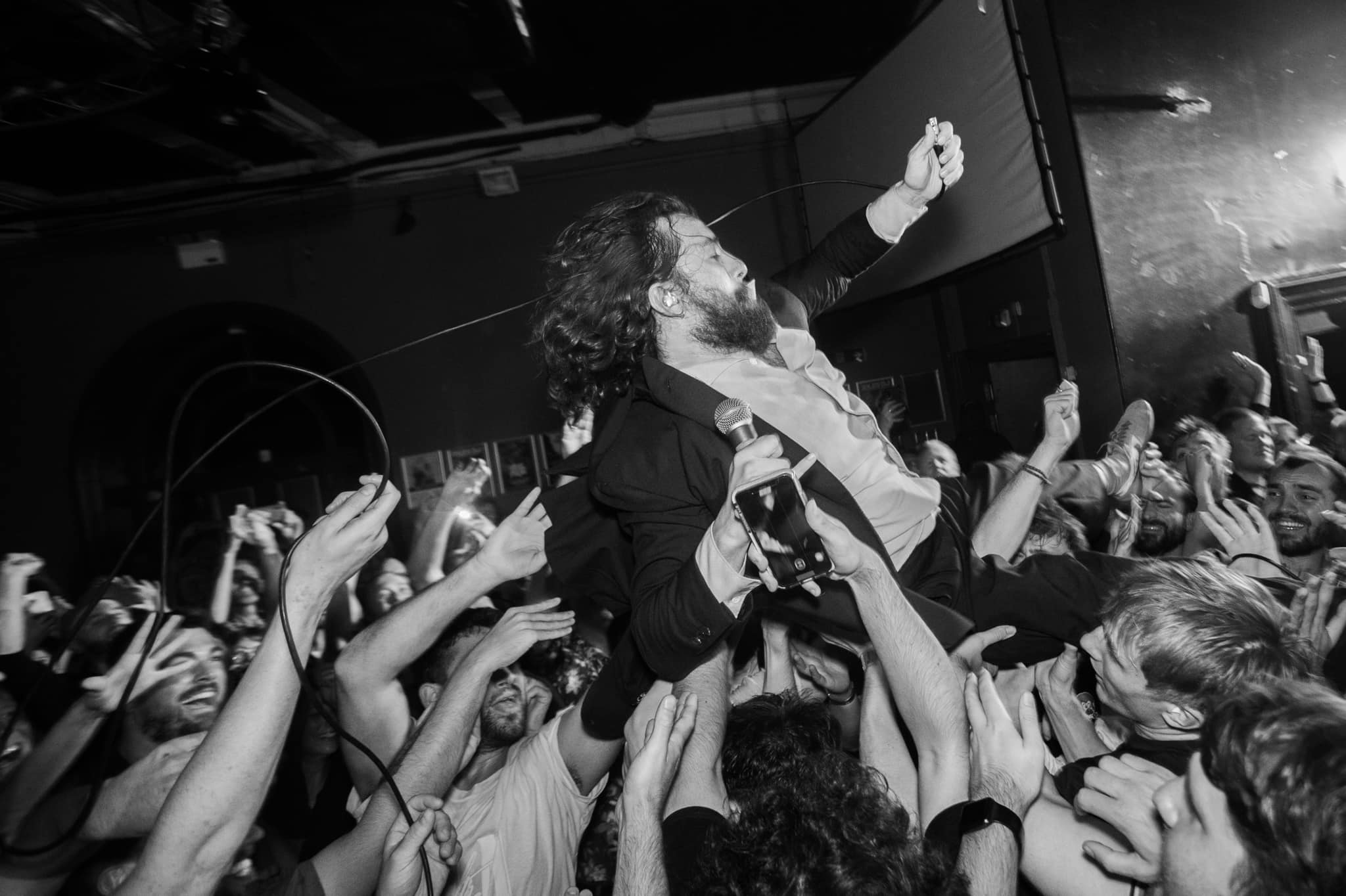 The second and third numbers were culled from the new album, ‘Ultra Mono’, namely ‘Grounds’ and ‘Mr Motivator’. Sandwiched between two ‘Brutalism’ album tracks (‘Mother’ and ‘1049 Gotho’) was another new track, ‘Anxiety’. During this number, guitarist ‘Bobo’, who has a distinctive high playing style with a short strap, went for a little carry around the crowd. He repeated this feat six numbers later, during ‘Danny Nedelko’ from the 2018 ‘Joy As An Act Of Resistance’ album. The crowd went particularly mad during this song and it was the one I was singing to myself on leaving the venue. Warning! Earworm alert!

The last couple of times IDLES have played in town, Joe has flagged up Brighton band DITZ as being the best band around! We at Brighton & Hove News Music Team have been flying their flag over the past few years too. Read one of our reviews HERE which states that they are now in the same league as IDLES and Fontaines D.C. 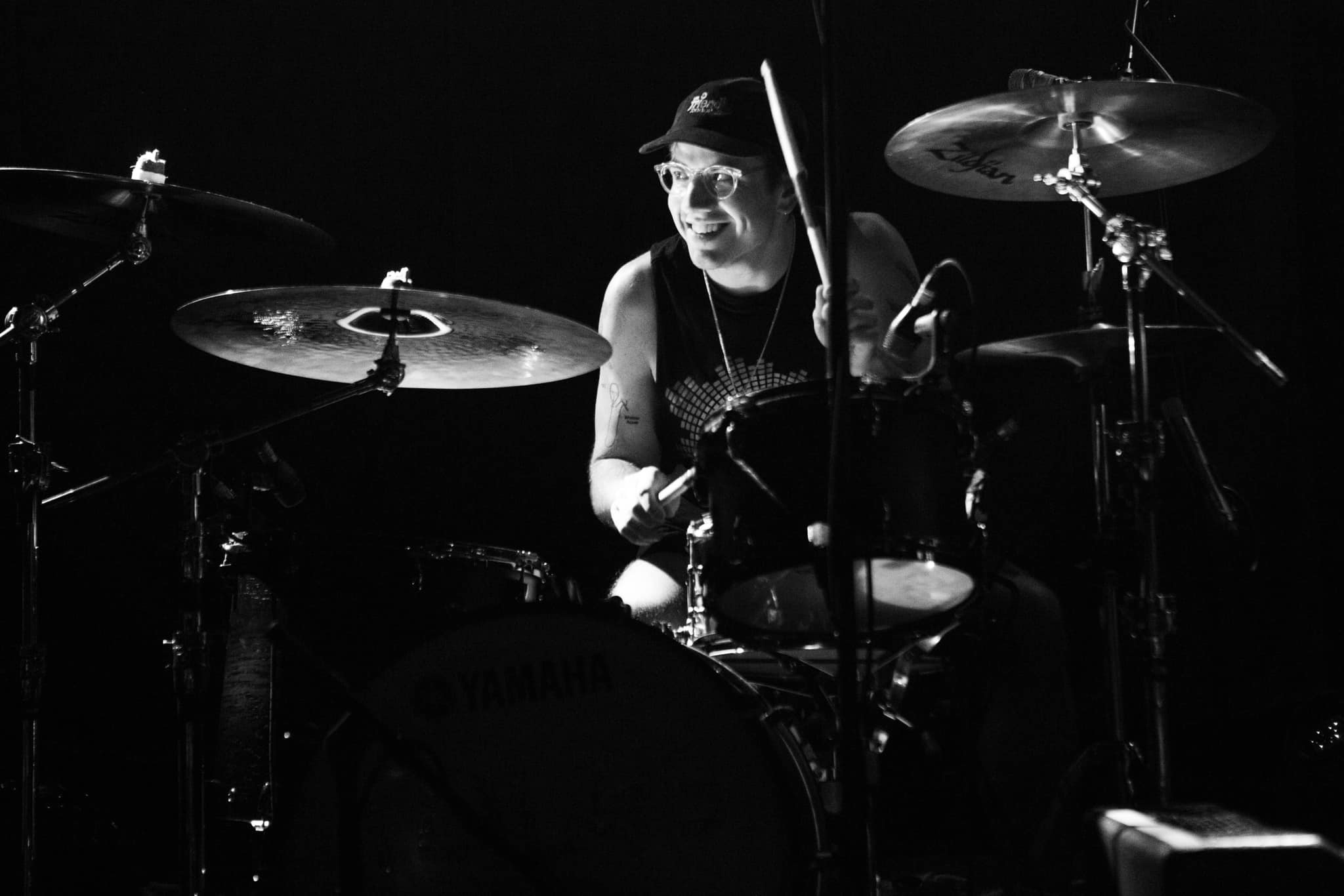 Jon from IDLES live at the Concorde 2, Brighton 13.9.21 (pic Jamie Macmillan) (click on pic to enlarge!)

During almost every number this evening, I found myself drawn to Jon’s motorik drumming as I watched him robotically playing away and even snapping one stick in half as he was knocking ten bells out of his kit. Fabulous stuff!

After ‘Danny Nedelko’, we were treated to an extended version of ‘Love Song’ from their ‘Joy As An Act Of Resistance’ album. Within the song, it included a medley of a trio of contrasting hits from other acts, those being ‘Turn Around’ by Brighton’s very own Phats & Small, ‘Live Forever’ by Oasis and ‘All I Want for Christmas Is You’ by Mariah Carey. For this number, Joe invited a chap to join the quintet on stage, who he referred to as “Z”, who he then called ‘Jack’. I’m pretty sure that this was actually the DITZ former drummer, Jack Looker who now plays guitar in the band. 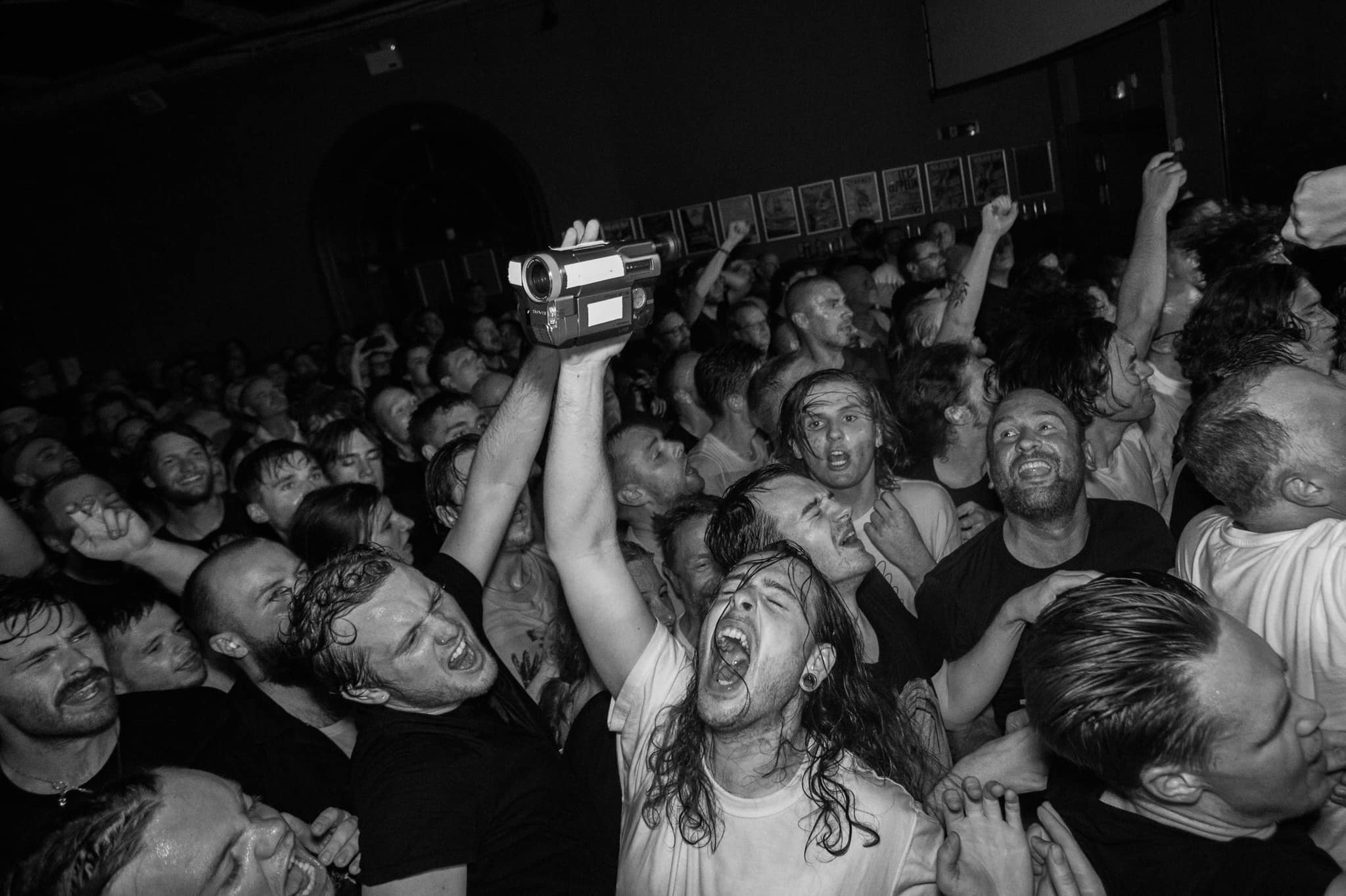 Lee from IDLES with a video camera at the Concorde 2, Brighton 13.9.21 (pic Jamie Macmillan) (click on pic to enlarge!)

The next number was ‘Never Fight A Man With A Perm’, which went down particularly well with the punters, until afterwards, Joe stated that the next song was to be the final number of the night. This was ‘Danke’ and a roadie brought an extra drum onto the front of the stage, so that Joe could join Jon in pounding away on the stix. It looked and sounded impressive!

As always, this was an invigorating IDLES gig and anyone in the building who does not concur must surely be dead and certainly not a member of the AF Gang, who are IDLES fans who tend to promote glowing love and positivity in the world. 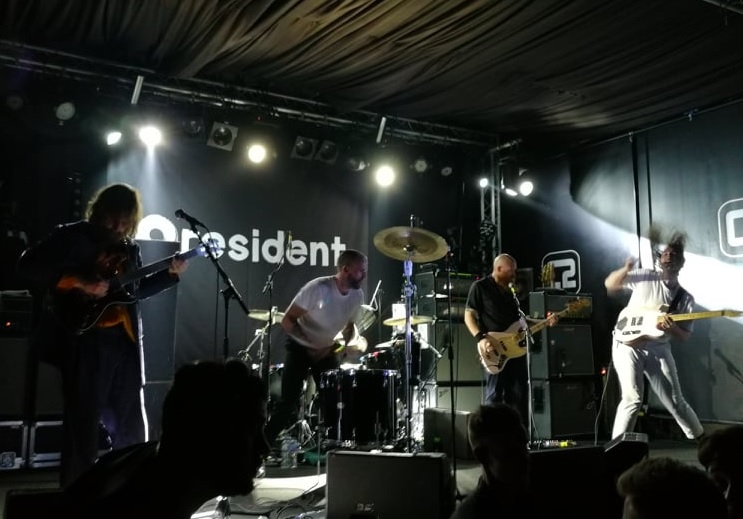 Regrets from this evening:
Sadly, they didn’t perform my favourite tune from the ‘Ultra Mono’ album, which is enormously catchy ‘Model Village’. They also didn’t play my favourite IDLES song ever, which is ‘Well Done’. They also dropped two tracks from the previous night’s set in Portsmouth, those being ‘Date Night’ and ‘Heel/Heal’. Tonight’s curfew was 11pm and there would have been time to play them, but hey, let’s not moan, as an IDLES gig is an exciting event to be treasured! Next time will it be the Brighton Centre? It could well be if their next album, their fourth, also gets to No.1 in the UK albums chart! 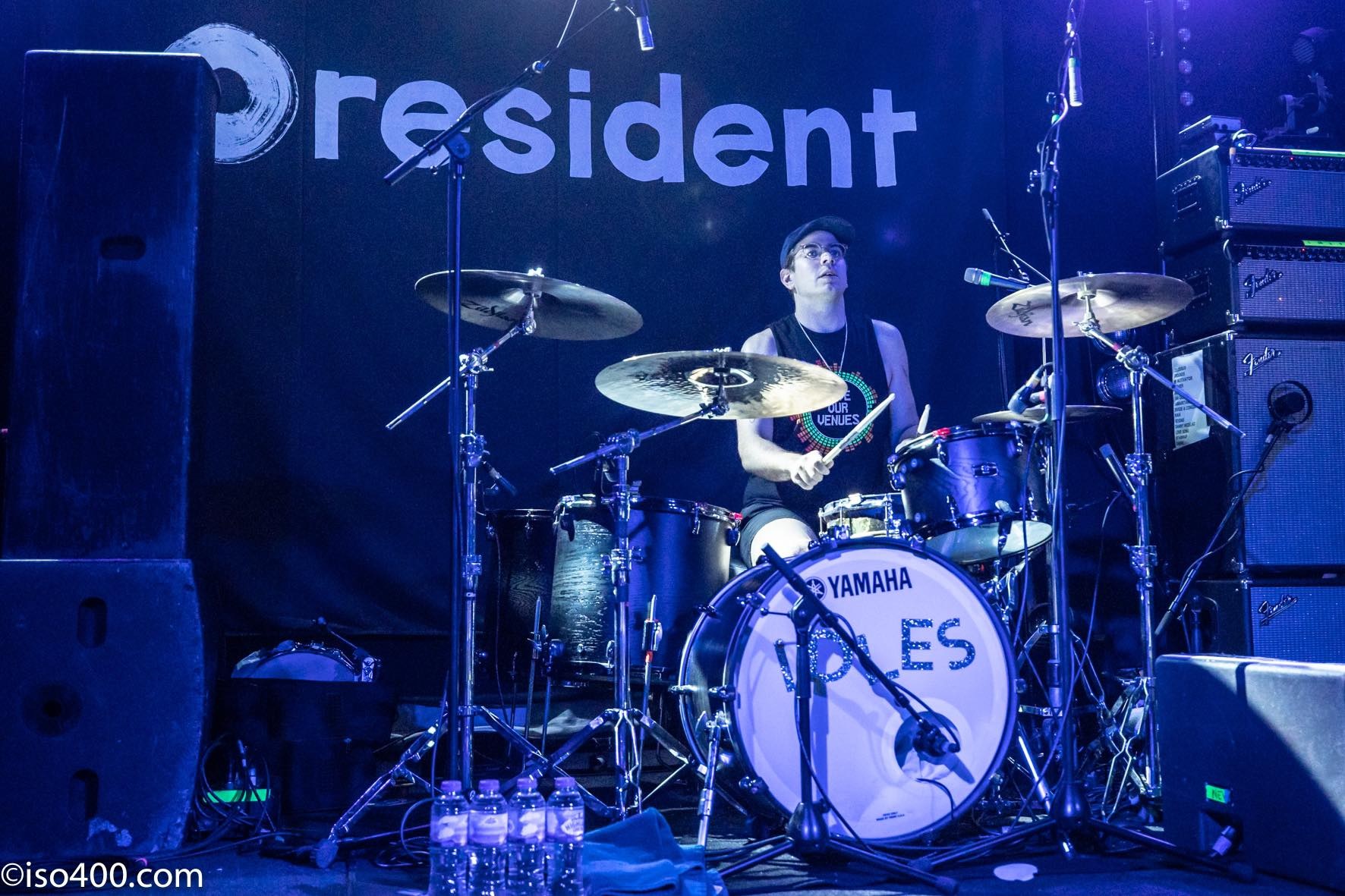 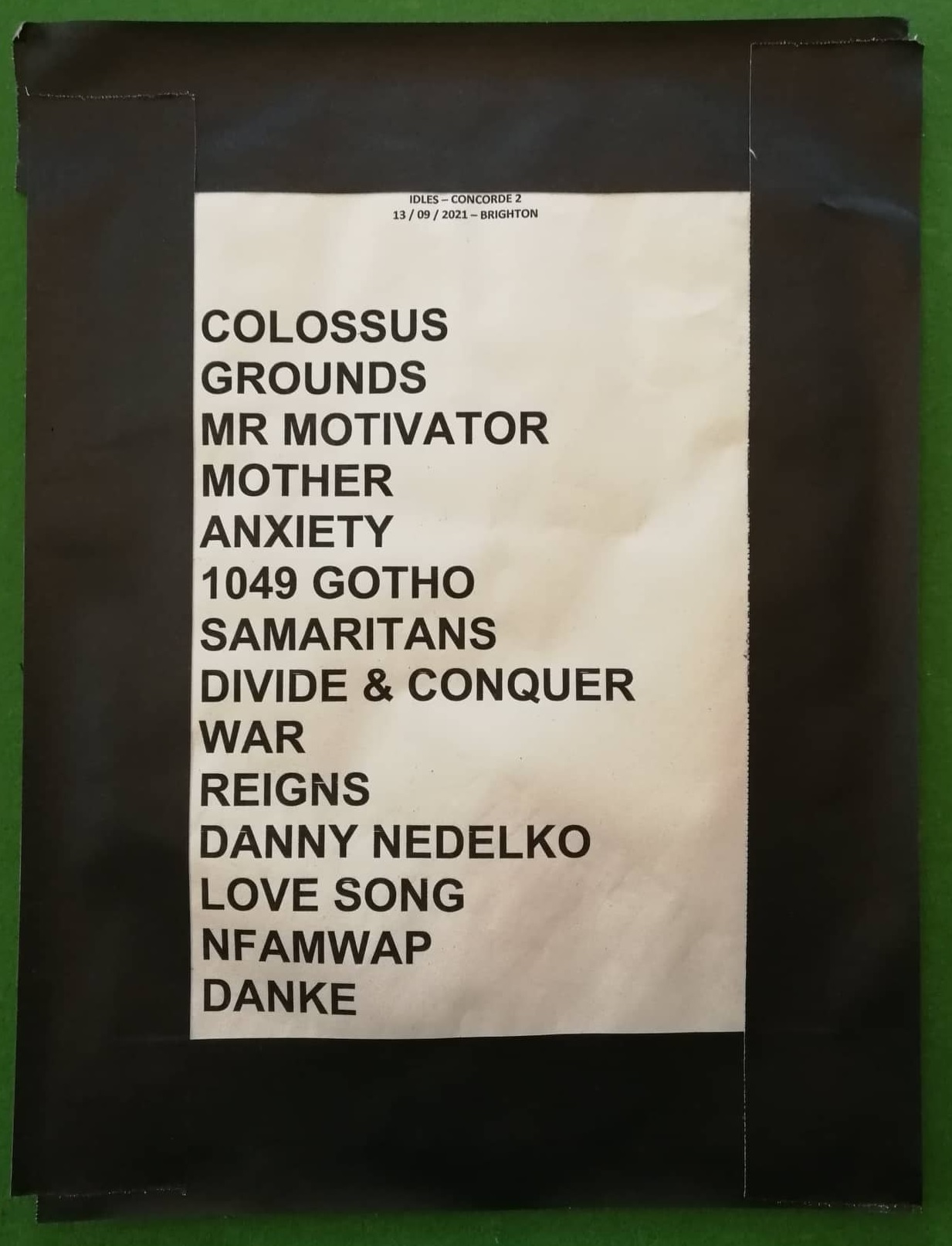