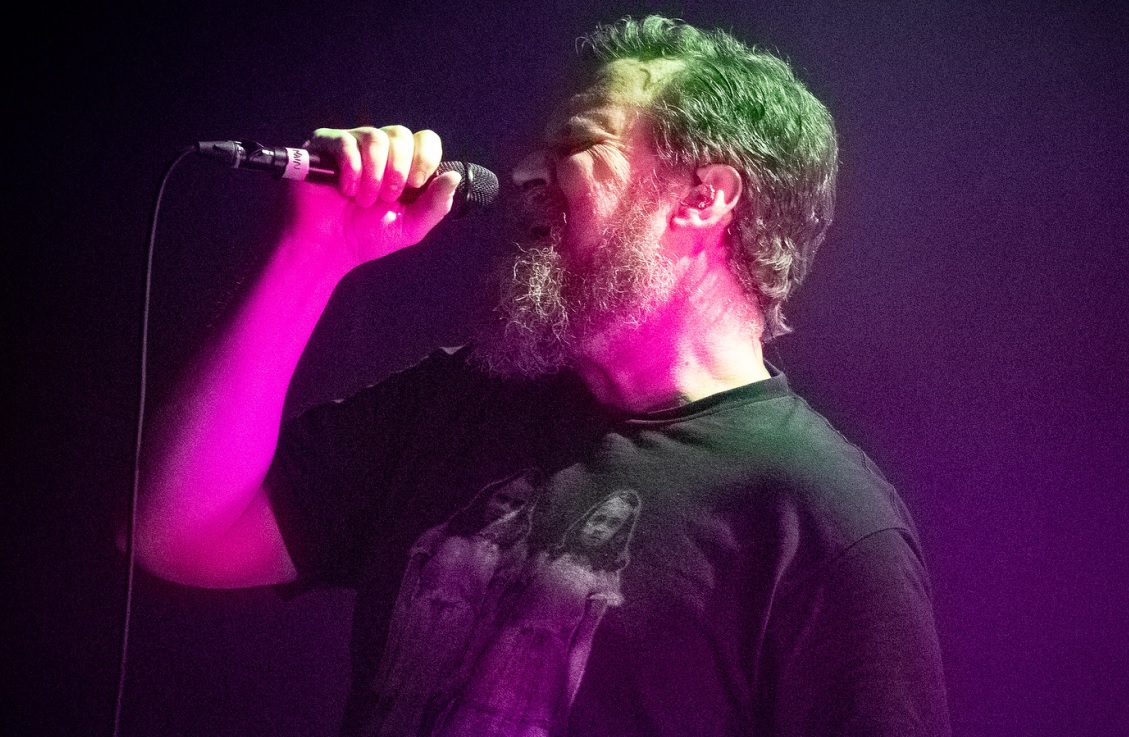 The very antithesis of toxic masculinity, singer songwriter John Grant exudes empathy, compassion and care. With haunting melodies and witty lyrics, he portrays American life from the viewpoint of the outsider and the underdog. His fifth solo album ‘Boy From Michigan’ includes reflections on a childhood move to Colorado, where the pervading conservatism proved a challenging environment for his emerging homosexuality. 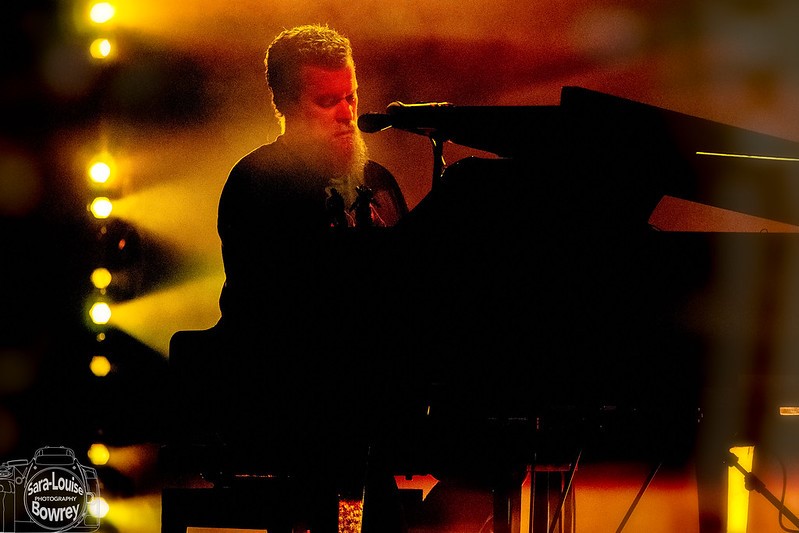 Since releasing his first solo album ‘Queen Of Denmark’ in 2010, the former singer and pianist with alternative rock band The Czars has established a formidable critical reputation of his own. Erudite and urbane, Grant is a polyglot with an international outlook, and has been based in Reykjavik in Iceland since 2013. His last four albums all made the Top 20 in the UK charts, and he has been involved in frequent collaborations with a wide range of artists. Tonight’s show at the iconic De La Warr Pavilion in Bexhill, originally planned for May 2020, is long-since sold out.

It’s a magical evening on the terrace outside the venue, perfectly calm and still, with a waxing gibbous moon hanging low over the sea. People are enjoying a drink and a chat in the dusk, as the pink and blue sky melts into a rich sunset. It’s a fantastic venue, and easy to see why so many touring acts want to play here. 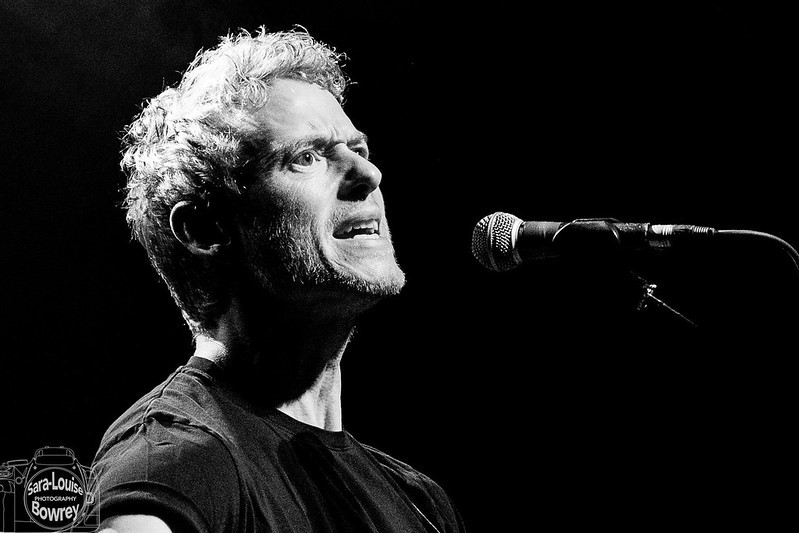 First up in the main hall we have a set from Teddy Thompson. The son of English folk rock luminaries Richard and Linda Thompson, he moved to America to forge his own musical career, and has released six solo albums, the most recent being ‘Heartbreaker Please’ in 2020. On stage his expression is intense and slightly pained, whilst his heartfelt vocal is accompanied by a delicately strummed acoustic guitar with lovely brisk flurries of notes between strokes. 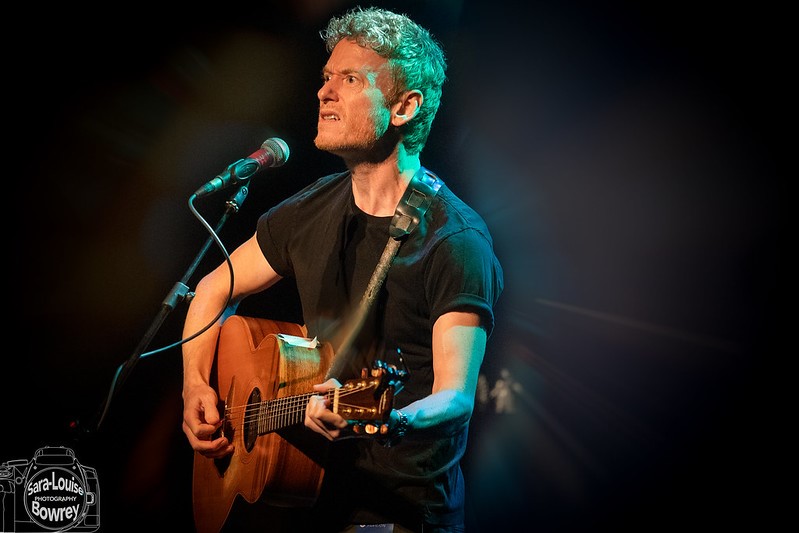 It becomes apparent that the lyrics are rather downbeat, with recurring themes of therapy and depression. Teddy uses a single guitar, altering tunings between songs whilst engaging in some self deprecating chat. There’s a false start, singing the wrong words on ‘Things I Do’, which he shrugs off, unfazed. “We’re all friends here.” His voice is rich and strong, and his playing is impressive. I particularly like the run of bass notes on ‘In My Arms’, and the more bluesy riff on ‘Can’t Sing Straight’. He discards his plectrum for some sparkling finger picked arpeggios on ‘Take Me Away’, which is the stand out number for me.
“Thanks for coming out. I have no other skills,” he jokes charmingly, introducing the final song ‘No Idea’. The mood is in keeping with the rest of the set. It’s been emotional.

Teddy Thompson setlist:
‘Heartbreaker Please’
‘Don’t Know What I Was Thinking’
‘Brand New’,
‘The Things I Do’
‘In My Arms’
‘Can’t Sing Straight’
‘Take Me Away’
‘No Idea’ 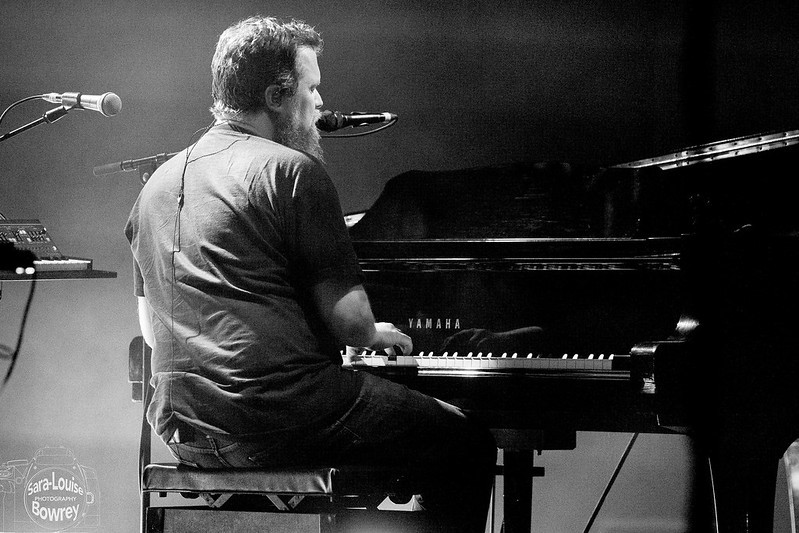 There’s a considerable air of anticipation in the hall as we await the main event. The stage is stylishly lit with blue uplights and glowing pink tubes. The seated audience gives a loud cheer as John Grant comes on. A tall, ursine figure with a thick beard, he stands centre stage with a small keyboard to his right and an array of electronic boxes and tablets on stands. House left is long-time keyboard player and band member Chris Pemberton. House right is Cormac Curran, wielding a semi acoustic guitar. He also has keyboards and a saxophone ready to go. John starts up a drum rhythm and retires to the rear of the stage to sit at a Yamaha electric grand piano.

“Life is a battlefield each day,” is the opening line of ‘Just So You Know,’ which launches a rich vocal alternating with fluttering falsetto over a hauntingly melancholic keyboard line. It’s a thoughtful and reflective start to the set with a slow build of bittersweet numbers from the current album. With the singer returning to centre stage, a wistful echoing sax line accompanies the moody electronica of the album’s title track, with some deft switching by Cormac between sax, guitar and keyboards. The lighting transitions to a wash of green pierced by pink shafts of light and John sits back at the piano, whose thudding chords underpin ‘The Cruise Room’. 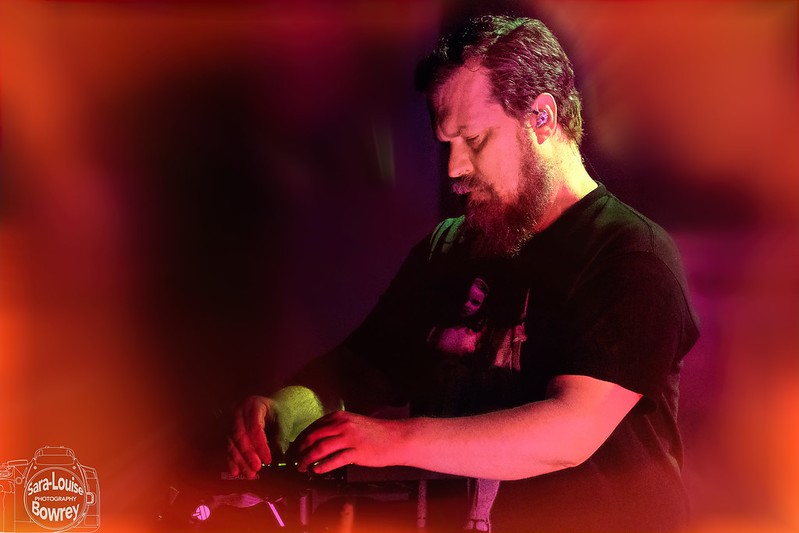 There’s a foray into the back catalogue for ‘Black Belt’ from 2013’s ‘Pale Green Ghosts’, which showcases his witty lyricism at its sparkling best, with rapid-fire bursts of gloriously satisfying internal rhymes and couplets. There should be a prize for including the word “callipygian” in a pop lyric. It’s made even more spectacular as our hero becomes decidedly more animated, strutting the stage, pulling spectacular rock frontman poses with some worryingly deep squats. Red and white lights pulse and flash vividly, culminating in a strobing light storm.

‘Rhetorical Figure’ from the current album has a similarly insistent electronic throb and equally jocular wordplay. “Some people like alliteration but I’ve always been an assonance man,” he confides cheekily, with emphasis on the first syllable. The lyrics trip on briskly through a glossary of unfeasibly scholarly literary terms, delivered from ambitiously deep squats and lunges. Eventually, soaring keyboards sweep us towards a climax of “gurgle, wap, splat” onomatopoeia. The slightly prog rock vibe is accentuated by some theatrically overblown air keyboard from the frontman. It’s quite a ride. 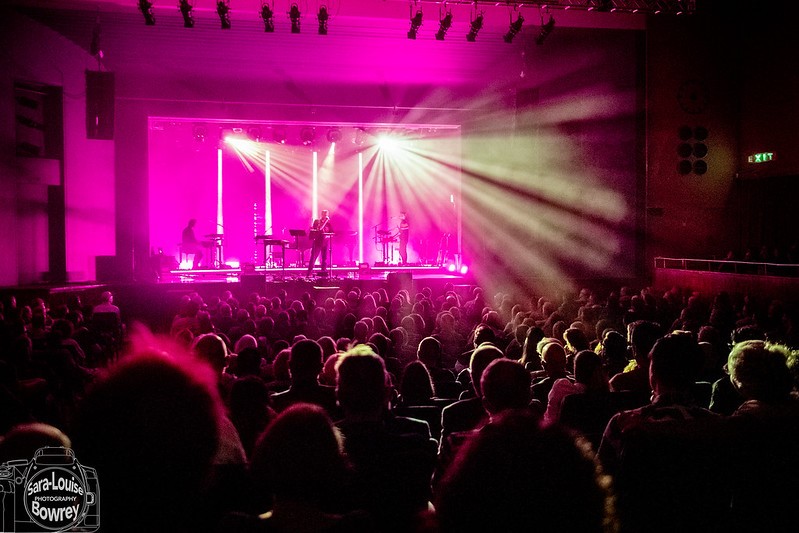 John is back at the actual piano for ‘Grey Tickles, Black Pressure,’ from the 2015 album of the same name, stark white light bathing the naked chords before guitar and synth join for a pomp crescendo. Next we are treated to a superb rendition of ‘Marz’ from ‘Queen Of Denmark’, John centre stage bathed in a warm yellow light. The opening chords get a loud cheer, and a long list of increasingly random ice-cream flavours draws us to a chorus of plaintive longing on an astronomical scale. This arrangement of an already magnificent song is utterly spellbinding.

Some squelchy retro synth accompanies ‘Mike And Julie’ from the new album, and the piano-led ‘Touch And Go’ from 2018’s ‘Love Is Magic’ reminds me of the 1970s pop-prog of Todd Rundgren. This is the calm before the storm though, as the set really takes off with another foray into the second album, ’Pale Green Ghosts’. 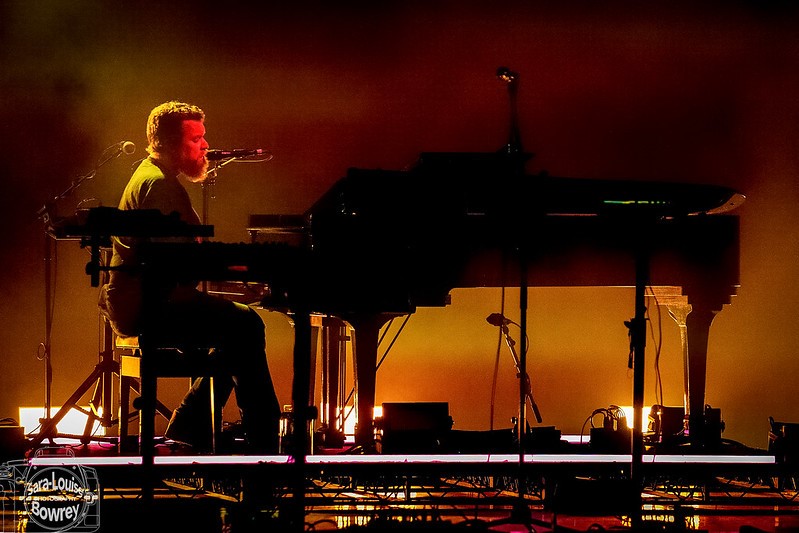 ‘Glacier’ is truly sublime, an epic slow build that snowballs into unstoppable momentum. The impressively versatile multi-instrumentalist Cormac has taken over on piano, and is doing a fine job banging out the massive chord sequence and solo, whilst Chris adds ethereal layers of synthesised orchestration. John’s voice is lavishly sonorous, and soars powerfully. It feels like we’ve just experienced something rather special.

‘Pale Green Ghosts’ is moodily dramatic, based around juddering riffs. John accentuates his performance, flinging out theatrical arm gestures, as the lights pulse and strobe. For the more urgently electronic ‘Sensitive New Age Guy’ he reprises his squatting rock frontman poses, and the crowd is absolutely loving it. 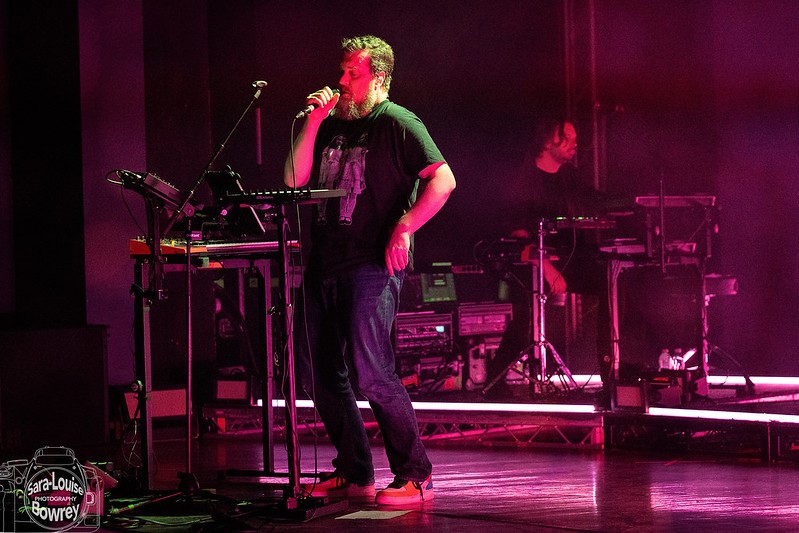 Thanking us for coming, he acknowledges how much he loves the venue and the place. “You’ll recognise this,” he quips, as the familiar chords of ‘Queen Of Denmark’ strike up.

The rapturous applause at the end leaves no question of whether there’ll be an encore, and the players return with ‘Dandy Star’, a long and steadily building groove that culminates in an ‘Aladdin Sane’ style piano freak out. The hard working backing musicians get another quick break as John sits alone at the piano and demonstrates his own formidable keyboard prowess with a stunning rendition of ‘Caramel’, from the first album. There’s no major surprise for the final song, and the crowd are in ecstatic delight as the band return for the magnificent ‘GMF’. There’s an awful lot of love in the room.

“I am the greatest motherf*cker that you’re ever gonna meet,” goes the iconic lyric, and I suspect that most of the delighted fans here tonight would wholeheartedly concur. 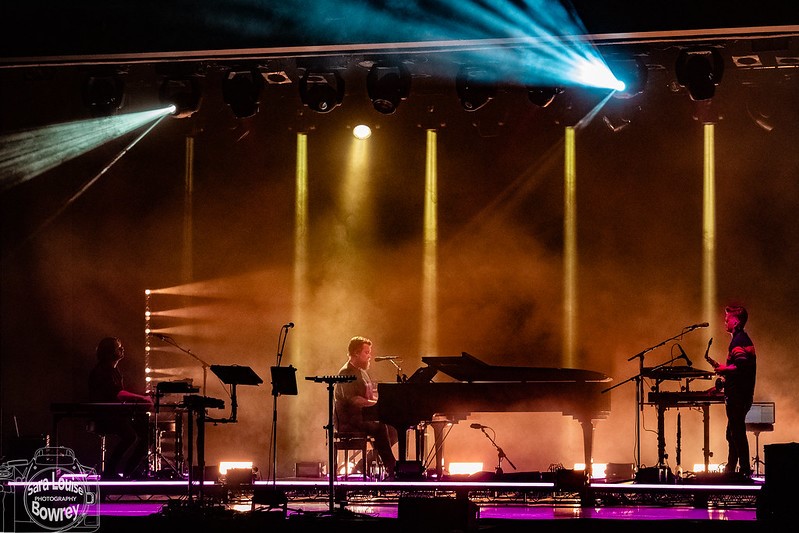 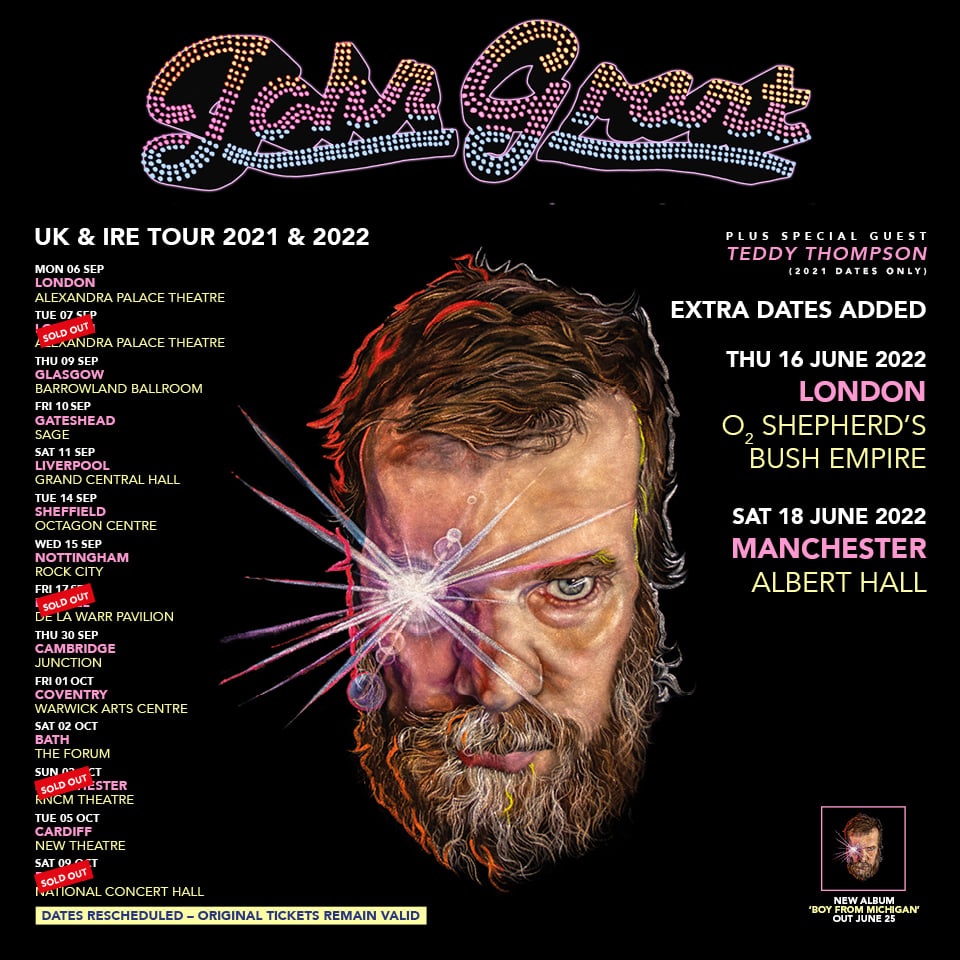