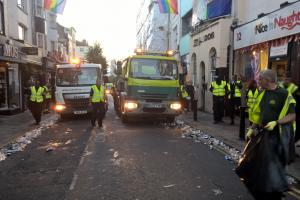 Cityclean staff at work in St James’s Street in Brighton

Bin lorry drivers are set to go on strike after voting to take industrial action over changes to their rounds.

Now, the service is set to get even worse from 5 October, when a series of strikes over two weeks is due to start unless the drivers’ demands are met.

Mark Turner GMB B50 Branch Secretary said the changes to rounds were being made as a “unofficial program of punishments and control” which has affected their mental health.

He said: “I am sure the council will want people to believe that this is just the GMB union and its members causing disruption once again, but the truth is that this avoidable dispute is completely as of a result of the council’s own making.

“They have been told time and time again about the service issues and detriment to our members health and well-being resulting around tinkering with well-established rounds and moving of HGV drivers outside of their own council formal procedures, yet they ignored our members and workplace reps’ complaints allowing it to go on anyway. “

Gary Palmer GMB Regional Organiser said: “There has been plenty of time for the council to sort this before and during the least six weeks or longer period of GMB’s industrial balloting processes, but they have chosen not to, leaving HGV drivers with little choice but to go into a dispute.

“Recently I spoke with one of our GMB members who hit the nail on the head when he told me, ‘I doubt they will listen to us seriously until we stand out on the picket line at the gates to the Hollingdean depot, they never do’.

“The council now has a two-week grace period during the required notification period before these strikes happen, long enough if they have the resolve to prove our GMB members’ wrong this time, and we don’t have to see members at the gates of their depot to get the council to adhere to their own managerial policies and procedures in treating their own HGV drivers with the respect they deserve.”

A council spokesman said: “Covid has had a detrimental impact on the health of Cityclean staff and has seen many unavoidably having to take time off because of being unwell or needing to self-isolate.

“The country also now faces a national shortage of HGV drivers due mainly to EU HGV drivers no longer being able to obtain visas to work in the UK.

“Combined, we know these factors have created pressure within the Cityclean service and we thank all Cityclean staff who have continued to work incredibly hard in these challenging and unprecedented times.

“To provide the best service for the city and to support staff, there are occasions where it’s felt appropriate to make crew changes or move a member of staff from one round or crew to another.

“We believe these requests are made openly and fairly and any concerns about round changes are quickly responded to by managers.

“We take the concerns of staff seriously, which has seen officers make a number of recent commitments and offers to GMB and drivers for them to consider.

“Meetings are planned to continue over the next few weeks where we hope to have positive discussions with GMB with the aim of mutually agreeing a resolution; avoiding industrial action; and achieving our shared vision of a city where we tackle waste and recycling together, continue collaboratively with Cityclean modernisation plans and provide the best service for residents.

“We look forward to being able to continue these discussions with the GMB and once again reiterate our commitment to finding a positive resolution for both staff and the city.”

The ballot result on a return of 79.6% was that members were 100% in favour of strike action.

Councillors are due to be updated on progress to modernise the Cityclean department this afternoon. A report to the environment, transport and sustainability committee said: “July and August presented some challenges for service delivery, which has continued into September.

“The issues started in mid-July with rising rates of covid across the country and the impact in the city resulting in many staff being ‘pinged’ and having to self-isolate, whilst others had covid and also needed to isolate.

“During the spring and summer, it was also very difficult to recruit new people or bring in agency staff, due to the need to self-isolate, with the situation made worse due to the national shortage of HGV drivers as a result of Brexit.

“As a result of leaving the European Union, it has also been difficult getting vehicle parts for when trucks break down, meaning the truck and crew cannot start their round, resulting in missed collections.

“Ultimately, when rounds or street cleansing services are missed, it’s then very difficult to catch up without the correct numbers of staff.”

Brighton and Hove City Council has been approached for comment.