A new bin store is overflowing because it is not big enough to cope with the volume of rubbish from five blocks of flats. 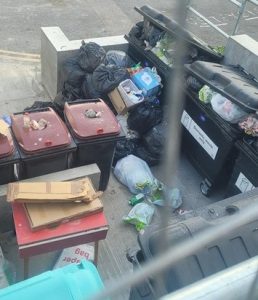 The overflowing bins in Bowring Way in Brighton

It was originally built to take the rubbish from two blocks of flats but now serves five.

His neighbours are complaining on social media and to Brighton and Hove City Council about the piles of rubbish building up in there every week.

Neighbours in other blocks in Bowring Way have regularly raised concerns about rubbish collections over a number of years.

Last month Pippin block residents said that they had had no rubbish collections for three months and their old bin store was infested with flies.

After weeks of complaints they were then told that they were supposed to use the new bin store by Cherry block.

The council had planned to build two new bin stores but funding was available for just one.

The council’s rubbish and recycling department Cityclean and the housing department are working on a second bin store to serve a further 18 flats in the cul-de-sac.

The council said that twice weekly collections were not possible at the moment because they had too few staff as a result of the national shortage of lorry drivers and manual workers.