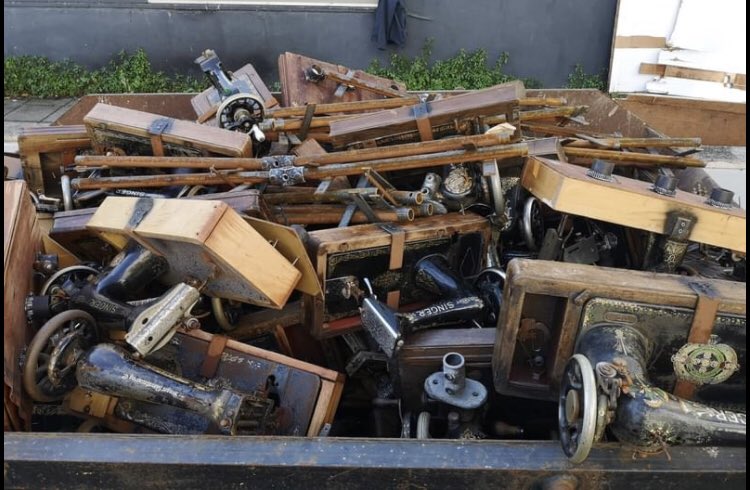 Eagle-eyed recyclers saved a skipful of Singer sewing machines in The Lanes which had been ripped out of the nearby All Saints store yesterday.

The picture above was posted on Facebook and Twitter yesterday morning, prompting scores of people to ask All Saints why they were being dumped.

Some people went to the skip to retrieve them – but at about 2pm, the contractors took them out of the skip. The clothes store then said they had been put in the skip by mistake.

A spokeswoman told Brighton and Hove News: “Singer sewing machines are an iconic feature of AllSaints’ store window displays, and we only ever use machines that have been fully decommissioned.

“Due to an error made by an external contractor, a number of the machines were recently mistakenly put in a waste container outside our Brighton store.

“This has now been rectified and we can confirm that the machines are safely on their way to be restored and reused across our store network.

“In line with company policy, those machines that are found to be unsuitable for store display purposes are either donated to charity or recycled.”

Cat Fletcher from Freegle Brighton, a group which coordinates offers of things for reuse, was one of those who flagged up the dumped sewing machines.

She said: “It goes on every day all over the city and it doesn’t have to.

“We have reuse systems that can redistribute unwanted/surplus stuff and the city has a circular economy road map that businesses should be told of.

“Freegle Brighton has 35,000 members in #brighton which makes it super easy to find a new home for unwanted stuff and much cheaper than a skip.”

The vintage sewing machines are featured in All Saints stores across the world. In 2012, court papers revealed the company had paid a specialist company, Unique Finds, millions of pounds for them over the course of four years.