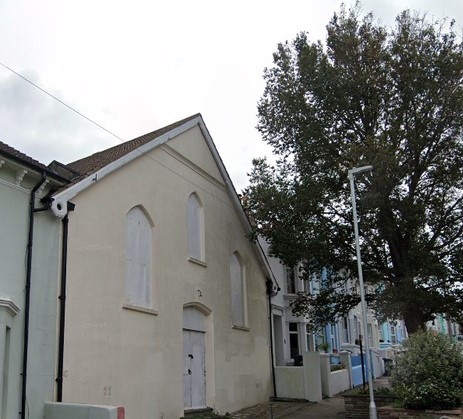 A landlord was told to come back with better plans after his bid to convert a church hall into “poky flats” was refused.

Mike Stimpson’s application to convert the former Mission Church Hall in Bentham Road, Brighton, into nine flats for social rent was turned down by Brighton and Hove City Council’s planning committee because they would be too cramped.

But councillors said they welcomed the Hanover site being used for affordable housing, and hoped a revised scheme would come back before them soon.

Resident Annie Hammond, one of 35 people who objected to the scheme, told the committee neighbours supported the church being converted, but that this scheme was “un-neighbourly”.

At Wednesday’s meeting, she said: “As a quiet street, we need affordable family homes, not studios.

“The homes will be cramped and opprissive and we are worried that will lead to a high turnover of tenants.”

She also referred to the developer’s wish to offset these affordable homes against another of its developments in Portslade, where none are planned.

She added: “It seems like a way for the developer to avoid having to provide affordable housing on another development.”

Her concerns were backed up by ward councillor Steph Powell – but her Green colleague David Gibson spoke in support of the plans.

Cllr Gibson reminded the committee the city is in the grip of a housing crisis, with 745 people in emergency accommodation, 2,000 in temporary accommodation and 6,000 on the waiting list for council homes.

He also said residents had met with him and Andy Winter, the chief executive of Brighton Housing Trust, which has expressed an interest in managing the scheme for people moving on from homeless accommodation.

He said: “Please don’t look a gift horse in the mouth, for people in housing need in the city. This site has been left empty for all of the 26 years I’ve lived in a neighbouring row.”

Mr Stimpson’s planning agent Paul Burgess, from Lewis & Co, said: I’m slightly perplexed as to why the report considers the provision of nine flats is inappropriate in the highly dense residential ara of Hanover.”

He also said he didn’t understand concerns about the elm tree outside the hall, as the scheme was a conversion rather than a new build and so unlikely to affect it.

However, councillors all agreed the flats were too small. Conservative councillor Carol Theobald said: “It’s good to make use of a disused church but this looks more like an over-large big HMO [house of multiple occupation]”

Green councillor Marianna Ebel said: “It’s nice to see affordable social housing but I think we can’t approve it at any cost. People who are paying social rent deserve good quality homes the same as everyone else.”

Labour councillor Daniel Yates said: “We shouldn’t be trying to build poky studio flats – that isn’t a good standard and possibly it’s not helping people into a standard of accommodation that’s going to support their wellbeing.

“Our need isn’t for shoebox living in this city.”

The plans were unanimously refused.