The Offspring ‘Come Out And Play’ in Kingston 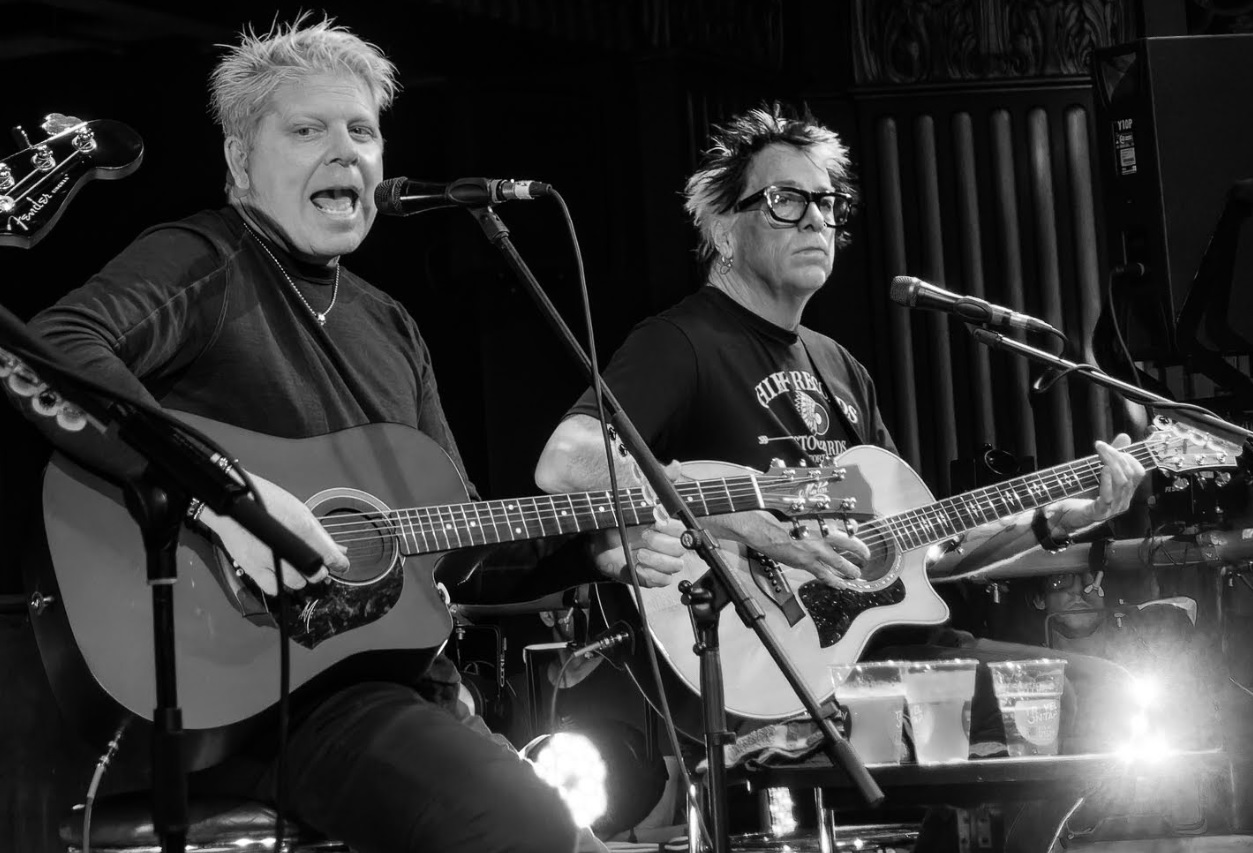 Tonight The Offspring are playing two stripped-back shows at PRYZM in Kingston brought to us by Banquet Records, who put on over 200 shows a year at this beautiful venue situated just across the road from the mainline rail station. The band has just finished a UK stadium tour for their latest album, ‘Let The Bad Times Roll’, so it’s a real intimate setting for this show, with Leeds Wardrobe being the only other date for the acoustic shows. 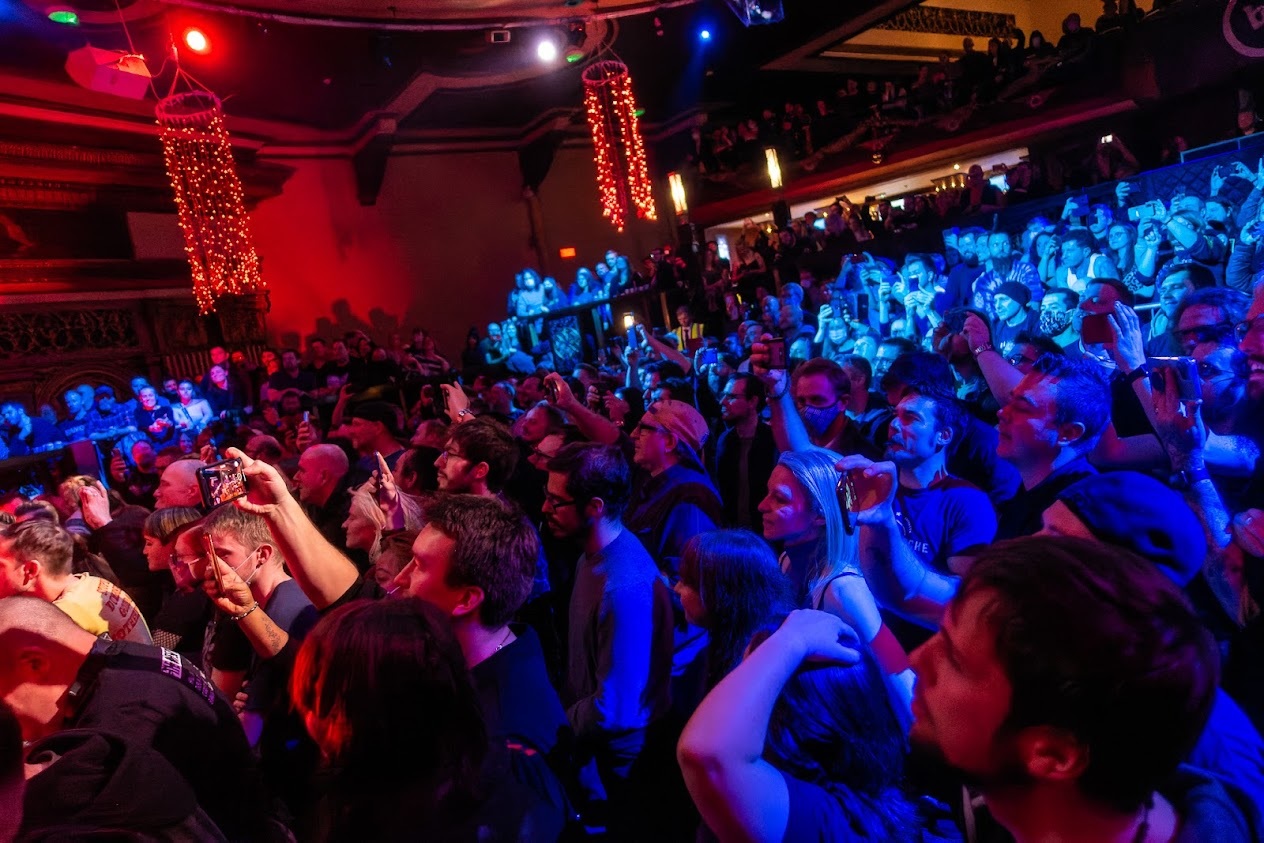 I could not attend any of the stadium shows this year, so I was pretty damn happy I’d secured this hot little ticket along with my purchase of the album some time back from Banquet Records.

The show was due to start at 6:30pm, but it’s not till after 7pm that the band finally walks onto the stage. This will make it a tight turnaround for punters as the second show is due to start at 8:30pm. The staff will certainly have their work cut out tonight. 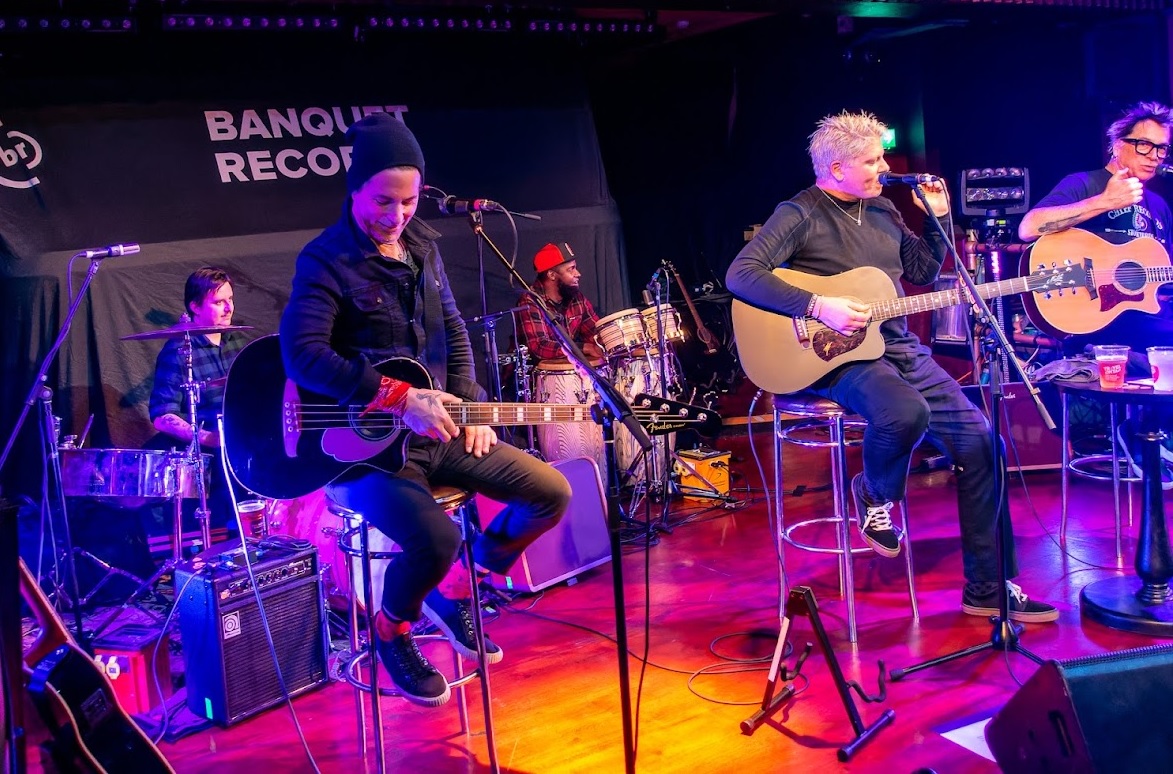 The stage setup comprises Dexter Holland and Noodles, both on electro-acoustic guitars, new bassist Todd Morse on a rather stunning jet black Fender acoustic bass along with drums and bongos, so there’s more of a punch to the numbers than I was expecting which is evident straight away with opener ‘Come Out And Play’. I wasn’t sure if the Offspring acoustic was going to work. Stripping a punk band of their electric guitars, you’d think you’d lose all the energy. Still, no the songs convert well to this format, some more than others, and the second number, ‘The Kids Aren’t Alright’, proves that even reworked with a ska reggae feel, it’s still a massive hit with the crowd. Every track that gets the treatment tonight is a sing-a-long classic just with a country-punk feel to the groove. 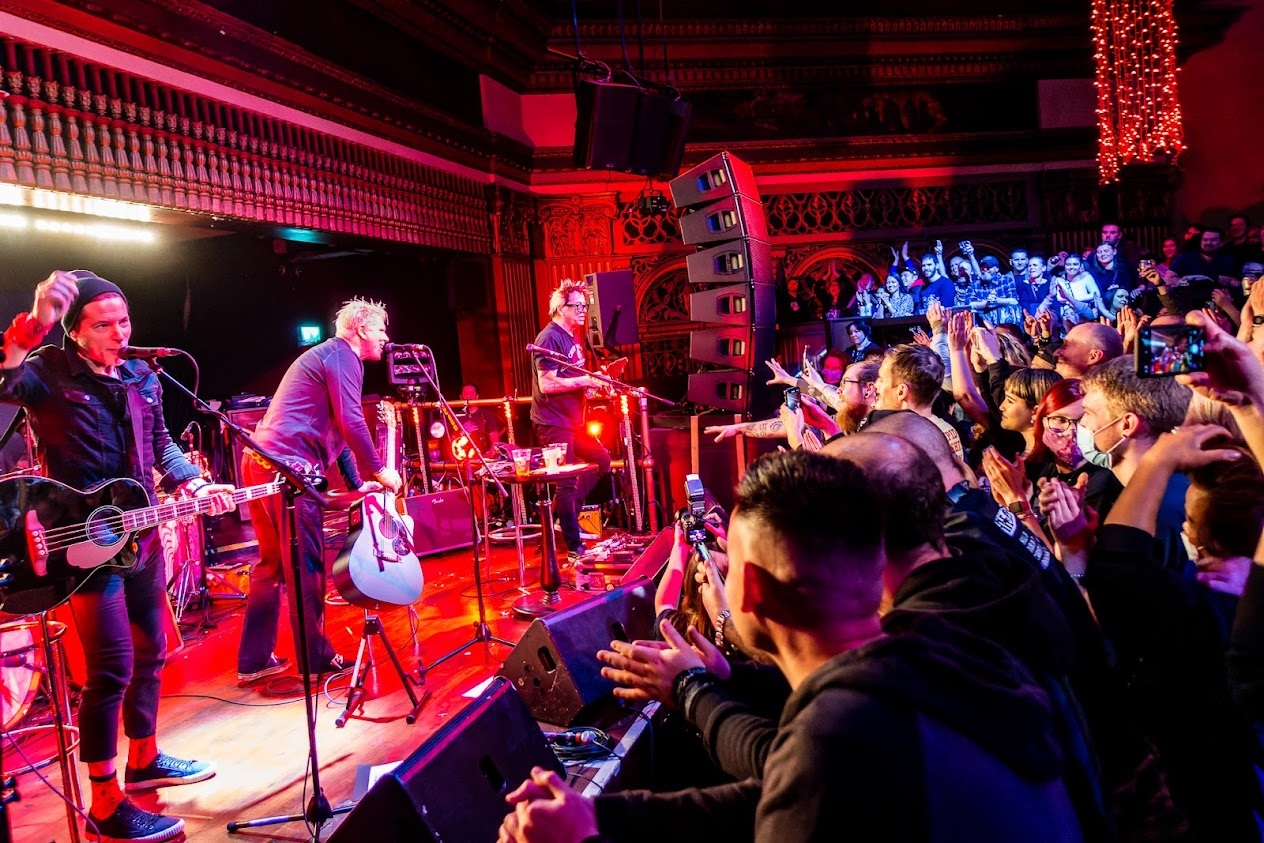 At one point, Noodles takes on ‘Bourrée In E Minor’ by Bach, something he likes to practice daily, and this segues into Black Sabbath’s ‘Iron Man’ with Dexter doing his best, Ozzy Osbourne, and nailing it.

We get a short interlude in the music as a member of the Banquet Records crew comes up to ask a few questions of the band, which, although is interesting it’s good to get back to the music again.

Tonight is a set of highlights, and hard to pick any favourites but if pushed, it’d have to be ‘Want You Bad’, ‘Gotta Get Away’ and the final number, ‘Self Esteem’, where Noodles changes from guitar to Ukulele, which works surprisingly well for the main riff. So we sing along to every word, and even a small moshpit opens up as the music gets to a number of the gig-goers. There’s no encore tonight, but the singing continues as Neil Diamond’s ‘Sweet Caroline’ blasts through the PA to send us on our merry way. 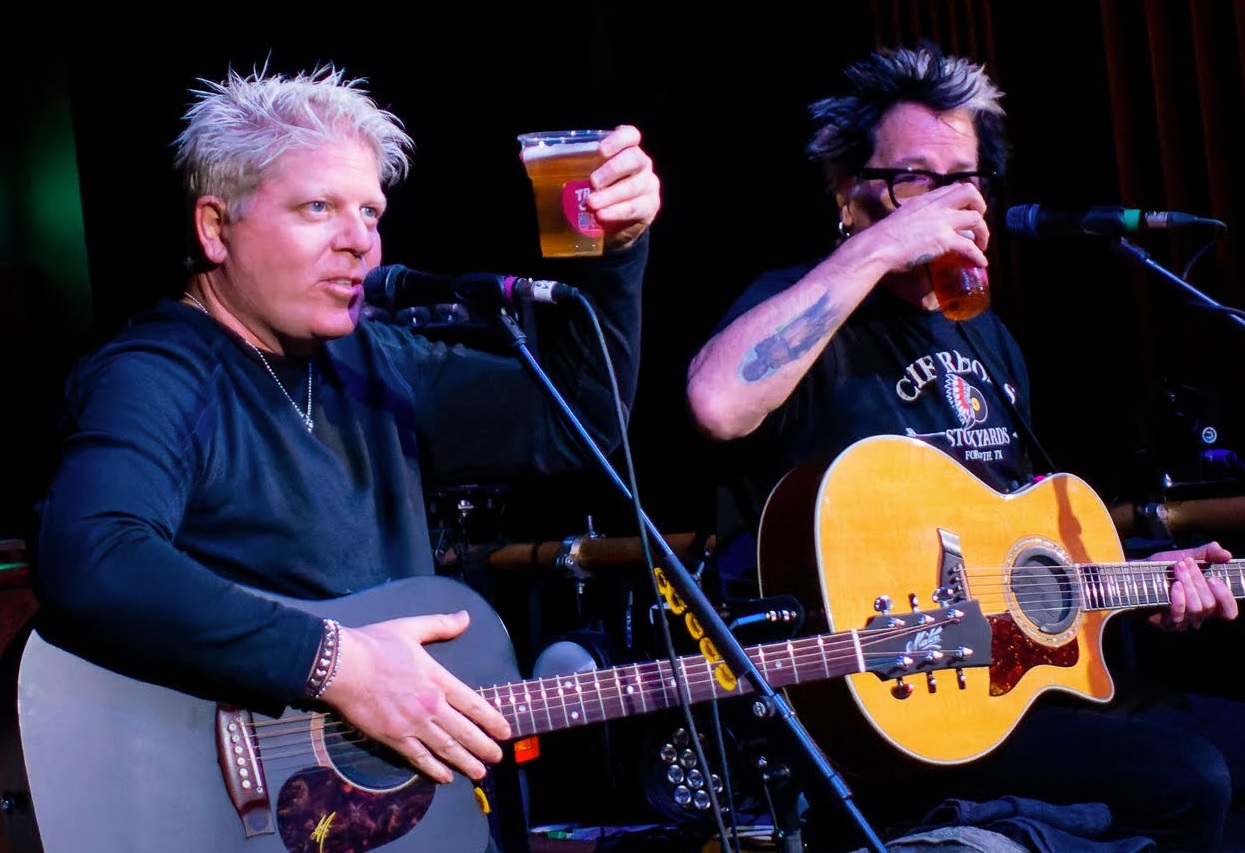 The Offspring setlist:
‘Come Out And Play’
‘The Kids Aren’t Alright’
‘Da Hui’
‘Walla Walla’
‘Dirty Magic’
‘Want You Bad’
‘Gotta Get Away’
‘This Is Not Utopia’
‘Bourrée In E Minor’ (Johann Sebastian Bach cover)
‘Iron Man’ (Black Sabbath cover)
‘Why Don’t You Get A Job?’
‘Self Esteem’

The purchase options for ‘Let The Bad Times Roll’ are available HERE. 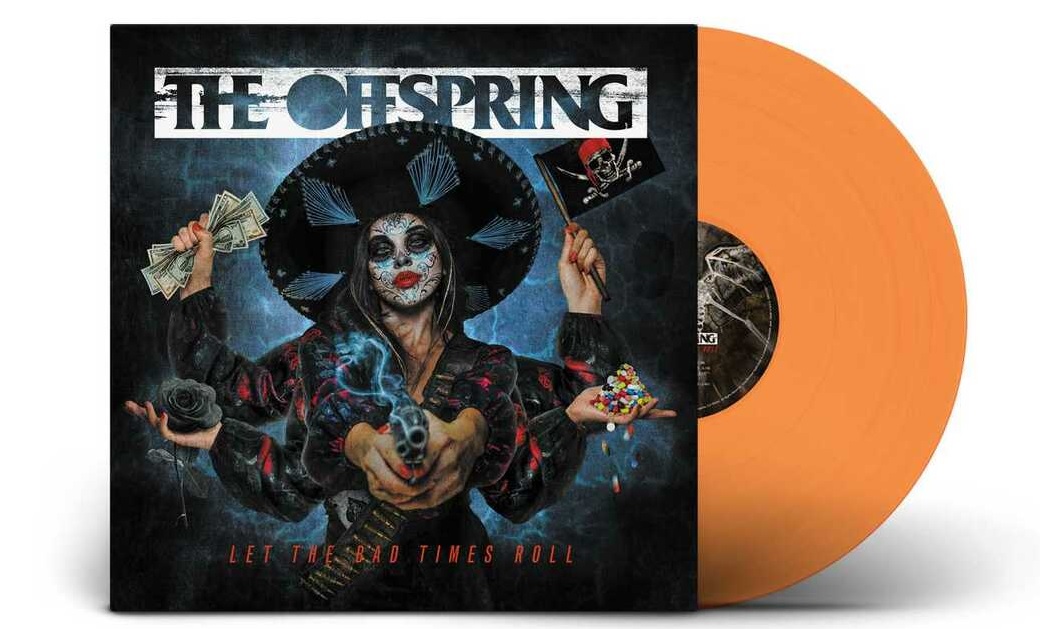 The Offspring ‘Let The Bad Times Roll’ album is available in various colours. This one is Orange Crush.