Archbishop of Canterbury talks to Brighton business community about leadership

The Archbishop of Canterbury Justin Welby had a business breakfast with about 200 community leaders during his visit to Brighton and Hove today (Saturday 5 March).

He shared his reflections on leadership – and the challenges that we face today – at St Peter’s Church, in Brighton.

In a speech that was witty and self-deprecating, Mr Welby said that the average member of the Church of England was a woman in her thirties who had a 50:50 chance of living in a war-torn part of the world.

He said that the world had changed as a result of the pandemic. He volunteered as a chaplain in a London hospital during the pandemic and said: “It’s easy to forget the fear and apprehension of two years ago.”

He said that when the pandemic started, the NHS didn’t know anything about the virus nor how many people would die. He paid tribute to NHS staff and acknowledged their courage going into hospitals every day. He said: “We are beginning a lengthy period of change and disruption.”

Mr Welby said that scientific developments brought hope – the study of the human genome meant that a vaccine was developed in 15 months by decoding DNA when it would previously have taken 10 years.

He spoke about the Russian invasion of Ukraine – an unprovoked “war of choice”, “a deeply wicked act” and a top-down war.

Mr Welby said that he had spoken to a military strategist about ethics and how artificial intelligence was affecting the military. They discussed the difficulty of programming machines to have compassion and said that armies needed to be willing to take prisoners rather than kill the enemy. According to the UN, there were 49 conflicts in the world at the moment.

He said that there would be more refugees from Ukraine in Eastern Europe and millions more could be displaced people because of climate change.

He said that there was a link between climate change and conflict. Different people would “bump into each other” more often and they would clash because they were fighting for their lives. Again, he said, hold on to technology – malaria, AIDS and the coronavirus were under control because of scientific advances.

On Radio Four, Mr Welby has been interviewing people such as Tony Blair, who said that the difference between countries that prospered and those that didn’t was governance and leadership, not natural resources.

He contrasted the leadership of Russia with Ukraine and said that President Zelensky was honest, like Churchill, about the scale of the threat. Leaders had to be courageous and take personal risks. Mr Welby said that in the Christian tradition there was an acknowledgement of failure and sinfulness which should lead to transparency.

He mentioned John F Kennedy’s humiliation at the Bay of Pigs in Cuba as a lesson for the president not to surround himself with “yes men”. He said: “Cuba instilled challenge, candid debate, diversity and courage.”

As a leader himself, Mr Welby said that he started by recognising: “I am a sinner and since I am a sinner, I am going to get it wrong.”

Mr Blair once said to Alistair Campbell: “The papers say I am surrounded by ‘yes men’. Where are they?” 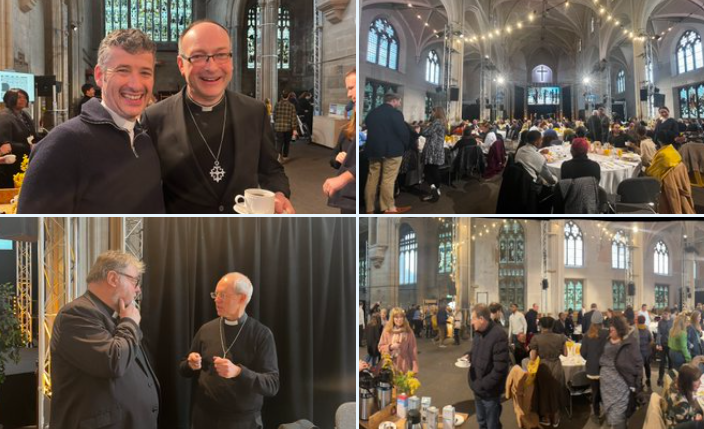 The Archbishop said that he looked for people who were cleverer than him. He said: “Leadership must involve acknowledgement of one’s weakness, challenge, courage, risk-taking and imagination … A safe pair of hands becomes elegant management of decline. Surround yourself with people who challenge you.”

He invited the business leaders to look to the example of Jesus: “Jesus did not sin. He offers freedom from guilt.”

He said that God brought this pure, true gift of his son to humanity: “The Lord is God who knows every part of us. It is the measure of Jesus that he engaged with people whom he loved and served. It was servant leadership. It’s a pattern of sacrifice. President Zelensky is prepared to put his life on the line.”

Recently, Mr Welby visited Pakistan where a peace centre was blown up, killing 60 children and 90 adults. The residents are building a reconciliation centre there. He said: “This is God … Don’t be impatient. Be curious. I am insatiably curious.”

He encouraged his audience to reimagine the context where there was difference and disagreement without hatred and conflict, asking, is Russia a separate country from Ukraine? He added: “The wickedness is the armed force instead of discussion and dialogue. Leadership is the greatest challenge we face in the next generation.”

When asked what was the biggest risk, facing the church, he said: “The church needs to risk her money. We are not a poor church. The risk is to live as if Jesus lives … loving one another. Strength and resilience come from Jesus Christ … We must serve those we disagree with.”

Andy Winter, the chief executive of homeless charity BHT Sussex, wrote about the breakfast on his blog. He asked: “My thanks to everyone who has prepared this lovely spread. But I couldn’t help but notice as I arrived that homeless people were being served breakfast from a kiosk in the car park. What does the church need to do to ensure that those in the car park are more comfortable in the four walls of a church than those of us enjoying this breakfast?”

Mr Welby said: “The church needs to go out to them and listen, not trying to make them who the church wants them to be.”

He said that there was a homeless man in Crawley who the church was trying to help and they told the archbishop they got it “totally wrong” at first. They tried to get the man off the streets before he was ready.

He said: “Start with respect and listen. Set the tone … God offers us choice and free will. I come from a family of alcoholics … My father died of alcohol, my Mum has been teetotal for 50 years. It’s your choice. I can’t stop you drinking. I can help you but you have to stop.”

From earlier today: Breakfast with the Archbishop of Canterburyhttps://t.co/NS3QUenAH3 pic.twitter.com/UtIJlualf1

Martha Mutikani, an associate vicar, said: “Representation of ethnic minorities is not great. How can we recruit more people who are minority ethnic?”

Mr Welby said: “I recognise that the church has had opportunities and missed them. We analyse the problems well and know that we need to be more inclusive of BAME, people with disabilities and physical disabilities and women. We recognise we have gone wrong.

“We need to engage alternative selection panels where clergy have BAME backgrounds. We need people to be willing to ask questions. We should encourage applications from BAME people and understand that the application forms will look very different. They will have a profound respect for the panel.”

He then asked why BAME applicants were getting on shortlists and not being appointed? He mentioned Colossians where, “all are one in Christ. When we are not recognising diversity, it’s about sin. We are sinning when we do not appoint people from ethnic backgrounds.”

Mr Welby was asked a question by a young person facing adversity with few Christian friends. What should she do?

He said: “We should train missionaries in our own faith to know they are infinitely valued by God.”

He mentioned Michael Ramsay, who was Archbishop of Canterbury in the 1960s. He was once heard banging his head on his desk in Lambeth Palace. When a chaplain went to see if he was ok, he said: “I hate the Church of England.”

First, we need to train young people as missionaries of today, not the future, he said. Young people need to know they are loved by Jesus Christ. Otherwise it’s the “Book of Laws”. Who wants another one of them?”

A GP, Elizabeth James, asked about how to deal with conflict in the workplace. The archbishop said: “We are working on the ‘Together Project’ with Brendan Cox, husband of (the late) Jo Cox. We have a working group to help address fracture and incapacity in the workplace to deal with difference.

“I interviewed Clare Moriarty, who was the permanent secretary at the Department for Exiting the EU. She took over early in 2019. On the same day as her mother, she was diagnosed with cancer and then made redundant early in 2020. She is now running the CAB.

“She is a Christian and in her workplace everyone would sit in small groups and recognise the ‘spitting ball of fury’ for 30 minutes every week. They would then think of next steps for 30 minutes and move forward, while recognising conflict. She was very calm, measured and very, very clear … In the military, you need sacrifice by the leader, listening undefended, good communication of why an objective matters to build ownership and the least bad use of resources.

The mayor of Brighton and Hove, Alan Robins, said that he had an ambassadorial role in Brighton and Hove and that he was like a salesman. He said: “People don’t always remember what you say. They remember the way you make them feel.”

Mr Welby said that his role was similar: “I came to Lambeth Palace nine years ago and the place was full of levers of power but they weren’t really connected to anything. Good leaders enable decisions to come. The character of leadership is the most important. There is a need for vulnerability and transparency. Do not pretend to be other than you are. People often forget what I said but they often remember when I say sorry.

“General Slim in 1945 was involved in the Burma Campaign. His number two in command, who was a field marshal, lost his leg because Slim advanced too quickly. General Slim regretted this deeply. He should have been more restrained. But he was open about his failure. I remember that story more than any other story in the book.”

The archbishop went on to meet people from community groups including refugees living in Brighton and Hove during his official visit to the Diocese of Chichester this weekend.