Police and council to tell travellers to leave Brighton park 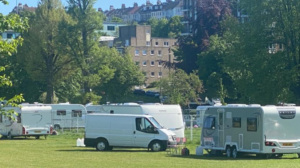 A group of travellers in Preston Park is being asked to move on by Sussex Police and Brighton and Hove City Council.

About 18 caravans pitched up on Monday evening (9 May) and set up an unauthorised camp.

At the same time there were reported to be enough vacant pitches at the council’s official traveller site in St Michael’s Way, in Horsdean.

The council said: “We are aware of an unauthorised encampment of travellers in Preston Park who arrived on Monday evening.

“We have visited the encampment to discuss the situation and carry out welfare checks on everyone there.

“As this is a well-used local park, we have asked the police to use their emergency powers to move the group on.

“We will work with the police to jointly monitor the encampment and will keep the situation under review, including the request to use emergency powers.”