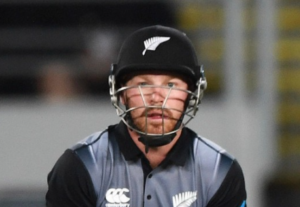 A T20 international is joining the Sussex Sharks for part of the season, the club announced today.

Tim Seifert, 27, will “slot in” as an overseas player while Josh Philippe joins Australia on tour in Sri Lanka.

“Seifert will play for the Sussex Sharks in this year’s T20 Vitality Blast during the period that Josh Philippe tours with the Australia A team in Sri Lanka.

“The New Zealand international has plenty of experience in one-day cricket at the top level, having played 40 T20I matches for his country.”

Sussex Sharks head coach James Kirtley said: “It’s great that we have signed Tim in the middle period of the Blast.

“It’s always good to have someone of his calibre but the fact that he is a batter/keeper means we are really getting two players.

“By continuing with an overseas player in that role it means we are not seeing any change among the rest of the team as Riz, Josh and Tim slot in and out.

“It provides consistency without disrupting the structure which are key elements behind a performing environment.

“Not only is Tim’s T20 record outstanding but he has played in the IPL and CPL so will offer great experience as well as having a very healthy first-class record.”