A charity faces objections to its plans to convert a hotel into a 50-bedroom hostel.

It has operated the hotel as temporary accommodation since the start of October last year.

In its management plan, St Mungo’s said that the hostel was needed to deliver Brighton and Hove City Council’s No Second Night Out programme to reduce rough sleeping and move people into housing within 42 days.

The plan said: “The service works towards stabilising clients by ensuring they feel safe and that their basic needs are being met.

“Each client has an allocated assessment and reconnection worker for case management who identifies an appropriate accommodation option for an individual … and makes appropriate referrals.”

St Mungo’s also works with the council to provide a personal housing plan and support people moving back to their home areas, either nationally or internationally, if they do not have a local connection with Brighton and Hove.

A temporary change of use to provide short-term accommodation for the homeless was approved for two years in 2002 and extended three times, with the site effectively operating as a homeless shelter until October 2007.

A further application for a temporary change of use – to use the shelter for homeless families – was refused in 2008.

Since then, the site has remained a hotel until St Mungo’s started using it for the No Second Night Out programme last year.

Neighbours have sent 46 letters of objection and two supporting the change of use.

One objector, whose details are redacted on the council’s website, said: “The massive disturbances to local residents from this hostel cannot be overstated.

“Our lives are being made a living hell. It’s terrible. How can the council subject residents to this? Don’t we matter?

“I now don’t leave my flat alone after dark after suffering abuse from residents and sexualised comments and approaches.” 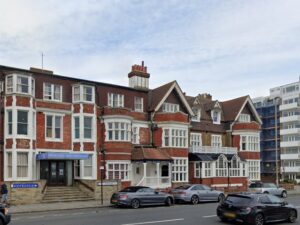 A supportive comment from a person whose details were redacted said: “If a community cannot provide a safe space and support to its vulnerable members, then it ought to feel shame.

“This proposal is the best chance to turn people’s lives around so that antisocial behaviour, that so many seem afraid of, is avoided.”

Another person’s comment raised concerns about behaviour, but they were not against the proposals.

Their comment, with details removed, said: “I don’t object in principle with the application. I do have strong reservations.

“I’ve already noticed an increase in people drinking in the garden attached to the building as well as several incidences of the police (and) ambulances having to attend to help severely intoxicated people outside the building.”

The see the planning application or to comment, visit the planning pages on the council’s website and search for BH2022/00670.