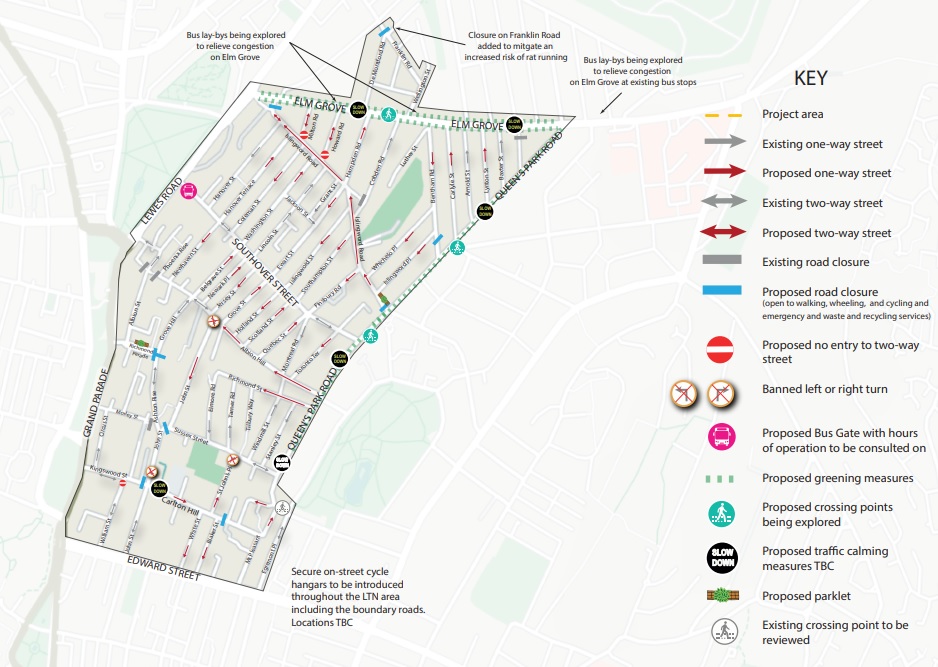 The scheme officers are asking councillors to approve for a two-month consultation. Right click and open in a new tab or window to enlarge.

The estimated cost of implementing Brighton’s first low traffic neighbourhood has risen by 466% to £1.4m.

Plans to close roads and install traffic calming in Hanover for a trial period to stop rat-running were initially budgeted at £300,000.

But the extension of the scheme – including permanent “greening” of two main roads around it, the installation of air pollution monitors and a full consultation – means it’s now slated to cost far more.

The measures on Elm Grove and Queen’s Park Road have been suggested in order to mitigate any potential increase in traffic on those roads during the scheme.

Transport officers say that although similar schemes elsewhere in the country have resulted in an increase in the months after they are implemented, this usually reverts to previous levels. In some cases, it has continued to be higher, and in others it has fallen further than before.

However, 329 people have signed a petition demanding the scheme is stopped and “liveable” benefits brought to the whole ward.

The revised plans, which are detailed in papers going before next Tuesday’s environment, transport and sustainability committee, also include details of changes to the scheme within Hanover itself.

These include measures around Carlton Hill School, traffic flow changes on Quebec Street, Montreal Road and Toronto Terrace, and revisions to plans for Cobden Road and Bentham Road.

Councillor Elaine Hills, committee member ward councillor for Hanover and Elm Grove said: “I’m very excited to see the latest design as it brings us a step closer to creating the city’s first Liveable Neighbourhood, which I believe will transform our area.

“We’re working very hard to make sure this project is shaped by the local community, so residents’ feedback has been invaluable. We want the changes to work for everyone and have taken the community’s input on board to come up with the current design. We’ll continue to listen to local people throughout.

“Rat-running is becoming an increasing problem for people living in the Hanover and Tarner area. Reducing traffic will encourage more people to walk, wheel and cycle and open up space for community use.

“The creation of healthier, low traffic/pedestrianised communities was the third most popular measure suggested by members of the Brighton & Hove climate assembly in 2020, when tasked with identifying ways to decarbonise our city.

“I’m hoping our scheme will be a model for future liveable neighbourhoods throughout Brighton and Hove.”

The original proposals for the low traffic neighbourhood (LTN) scheme featured two options, both of which included a road closure between Albion Rise and Grove Hill and a bus gate at the bottom of Southover Street.

Some roads were turned from two-way to one-way or vice versa, and some closed at the junction with Elm Grove or Queen’s Park Road, including Albion Hill.

Under the new scheme, Albion Hill would be open to traffic at Queens Park Road but Islingword Road would be closed, with a pocket park replacing parking outside the pharmacy and doctors surgery at its top.

All the other pocket parks have been removed, except one in Richmond Parade.

Roads coming off the bottom section of Elm Grove would either be one way going north, or no entry from Islingword Road.

The papers do not make it clear whether the greening measures along Queens Park Road and Elm Grove would be on the road or the pavement, or both.

New crossing points on the main roads would also be explored.

There would also be secure on-street cycle hangars throughout the LTN area in locations to be confirmed.

If approved, the design will go out to full public consultation in the next few weeks, which will last two months.

The budget for the scheme was previously set to come out of the council’s local transport plan fund.

The extra funding required would potentially come from the council’s carbon neutral fund, or possibly borrowing, extra money from the transport fund, or elsewhere. 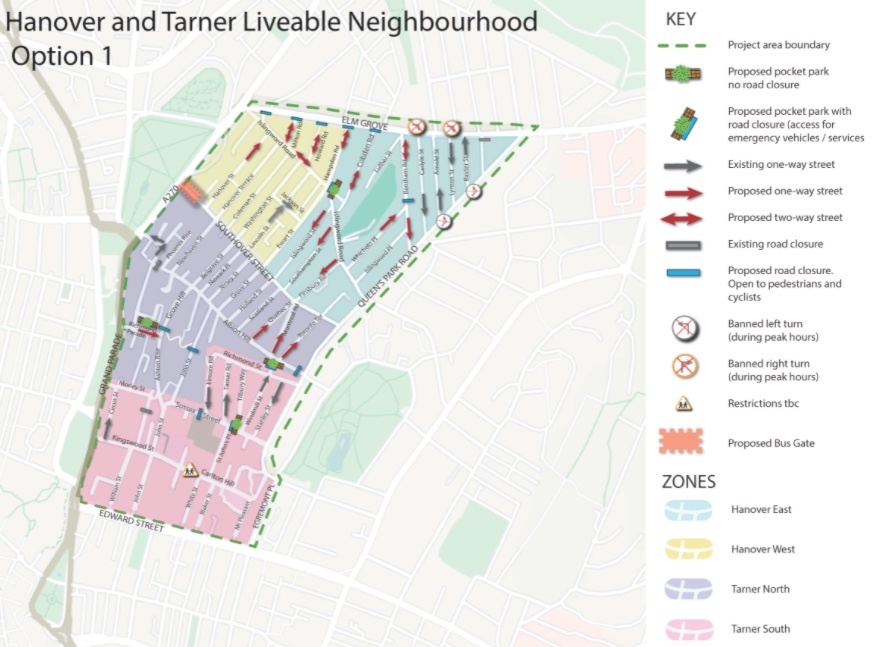 The previous option 1. Right click and open image in a new tab to see a larger version 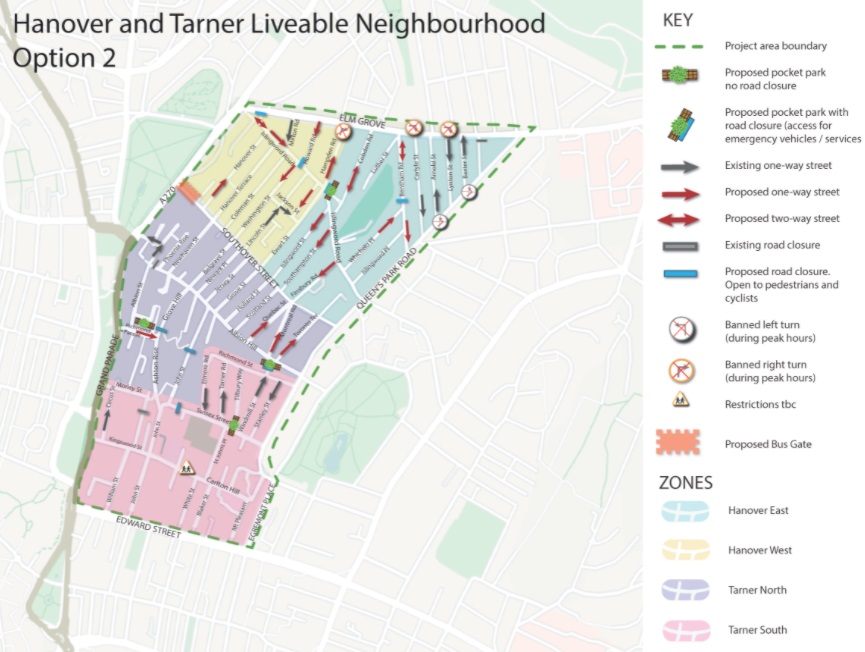 The previous option 2. Right click and open image in a new tab to see a larger version