Concerns about violent crime have thwarted a Brighton takeaway owner who applied for a late-night licence. 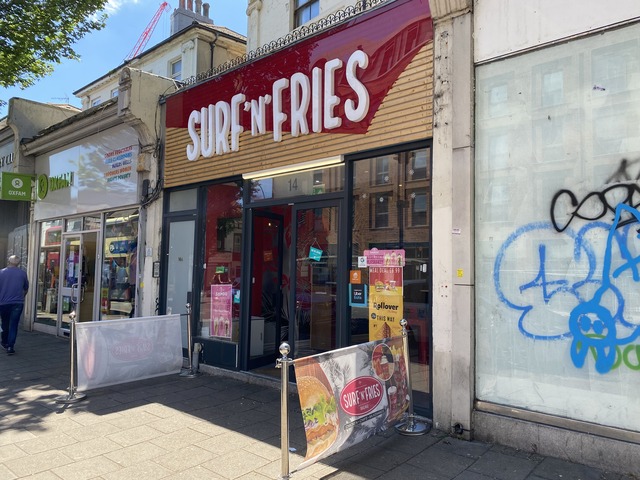 Surf ’n’ Fries, in London Road, will have to stick to an 11pm closing time after the decision by a Brighton and Hove City Council licensing panel.

The business is owned by Carmarthenshire Services Ltd, whose directors, Sobhy Khier Saad, 37, and Peter Adelatta, 33, work full time in the shop.

At the licensing panel hearing on Tuesday 8 June, Mr Saad told councillors that the business was struggling and needed the extra hours to make money.

But Sussex Police said that the stretch of London Road between Aldi and Costa was well-known for anti-social behaviour and begging.

Police licensing officer Hannah Staplehurst said that there were “hotspots” for serious violence including violence aimed at women and girls along London Road.

She said that three of the four violence hotspots were close to late-night takeaways in the area.

From the start of May last year to the end of April, Sussex Police recorded 1,234 crimes in the London Road area of Brighton.

The road is in an area designated a special stress area (SSA) by the council where it operates tougher licensing rules to try to address anti-social behaviour, nuisance and crime.

The panel of three councillors – Jackie O’Quinn, Clare Rainey and Dee Simson – said that they sympathised with the firm’s financial pressures.

But, in a decision letter, they said that they had to consider the licensing objectives to protect the area from crime and anti-social behaviour.

The panel said: “Although the operating schedule sets out steps that were intended to be taken to promote the licensing objectives, we were not convinced that they were tailored to the operation of the premises or to making positive proposals to ensure that there would be no adverse impact on the SSA.

“We lack confidence in the applicant fully understanding the range of considerations which need to be addressed when applying for a late licence in this area.”