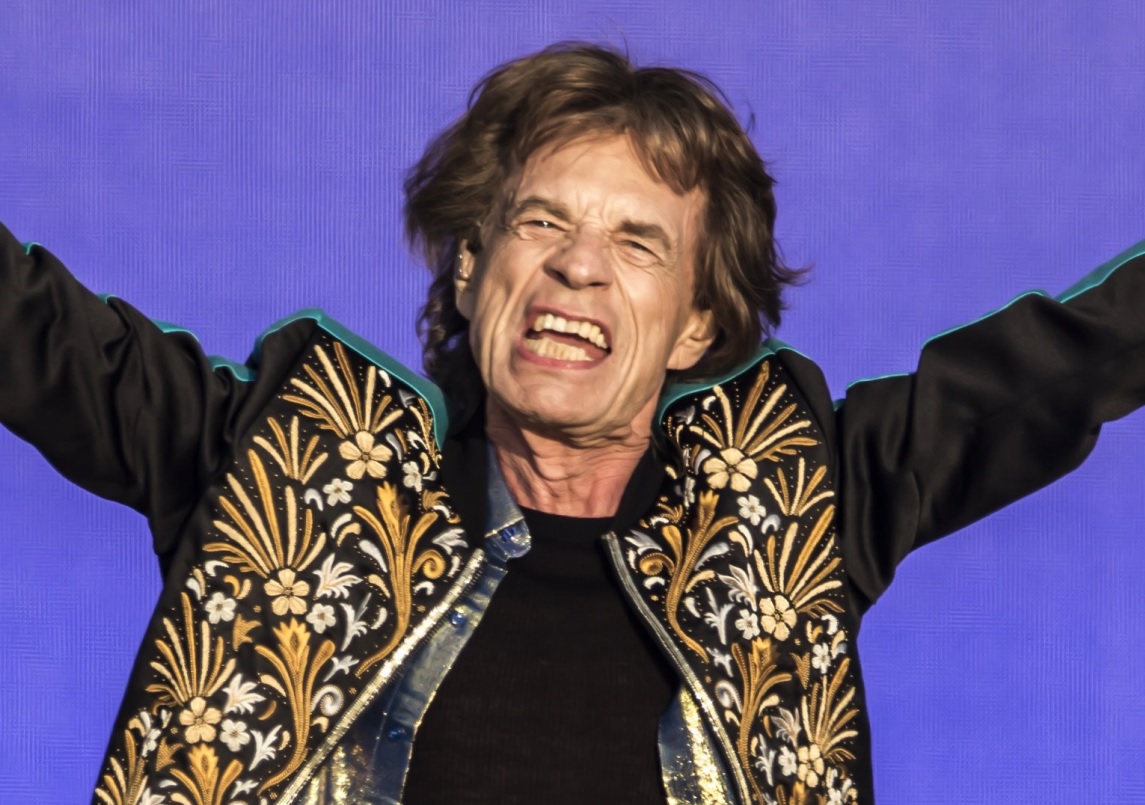 For decades any Rolling Stones gig has been a major event, but today’s gig is particularly resonant. Partially because Hyde Park was the site of the band’s first gig after the passing of Brian Jones, and partially because today is the first time most of the people here will have seen The Rolling Stones play without Charlie Watts. However, the moment when we discover whether a Charlie-less Stones actually works or not is still some hours away. Before that, the Stones have put on what is effectively a festival in its own right for us to enjoy. So let’s see what’s on offer. 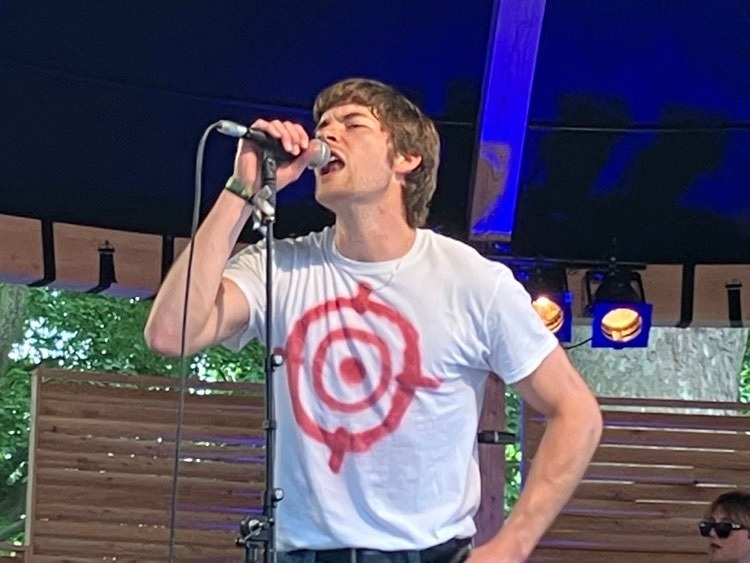 Just inside the south entrance to the venue is the ‘Birdcage Stage’, and shortly after we arrive a band called Feet appear. They were in Brighton last month at the Chalk venue in Pool Valley. Feet are from Coventry and comprise George Haverson on vocals, Callum Parker and Harry Southerton on guitars, Oli Shasha on bass and Ben Firth on drums. 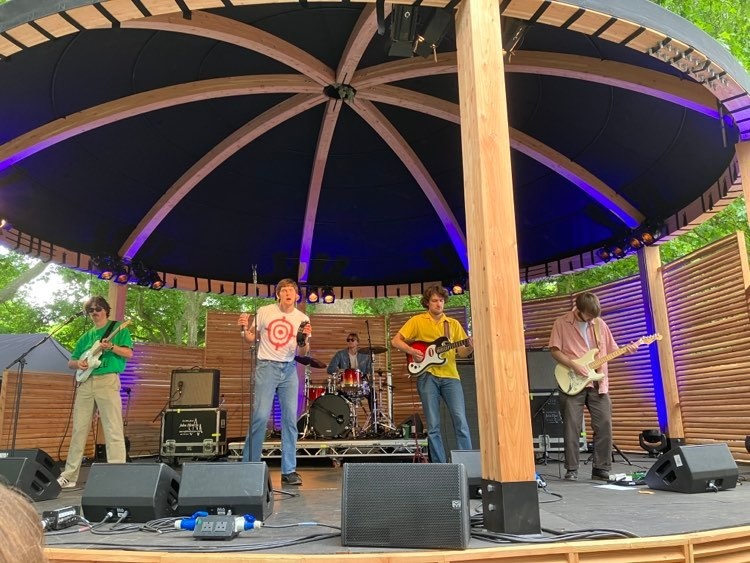 They play melodic, punchy rock ‘n’ roll and have a finely honed sense of humour. Haverson tells us “I know you’re all here to see us, but please stay to see the other bands”. Well, in another ten or twenty years that may well be true. In all honesty though, they rock, and I would like to have seen more. 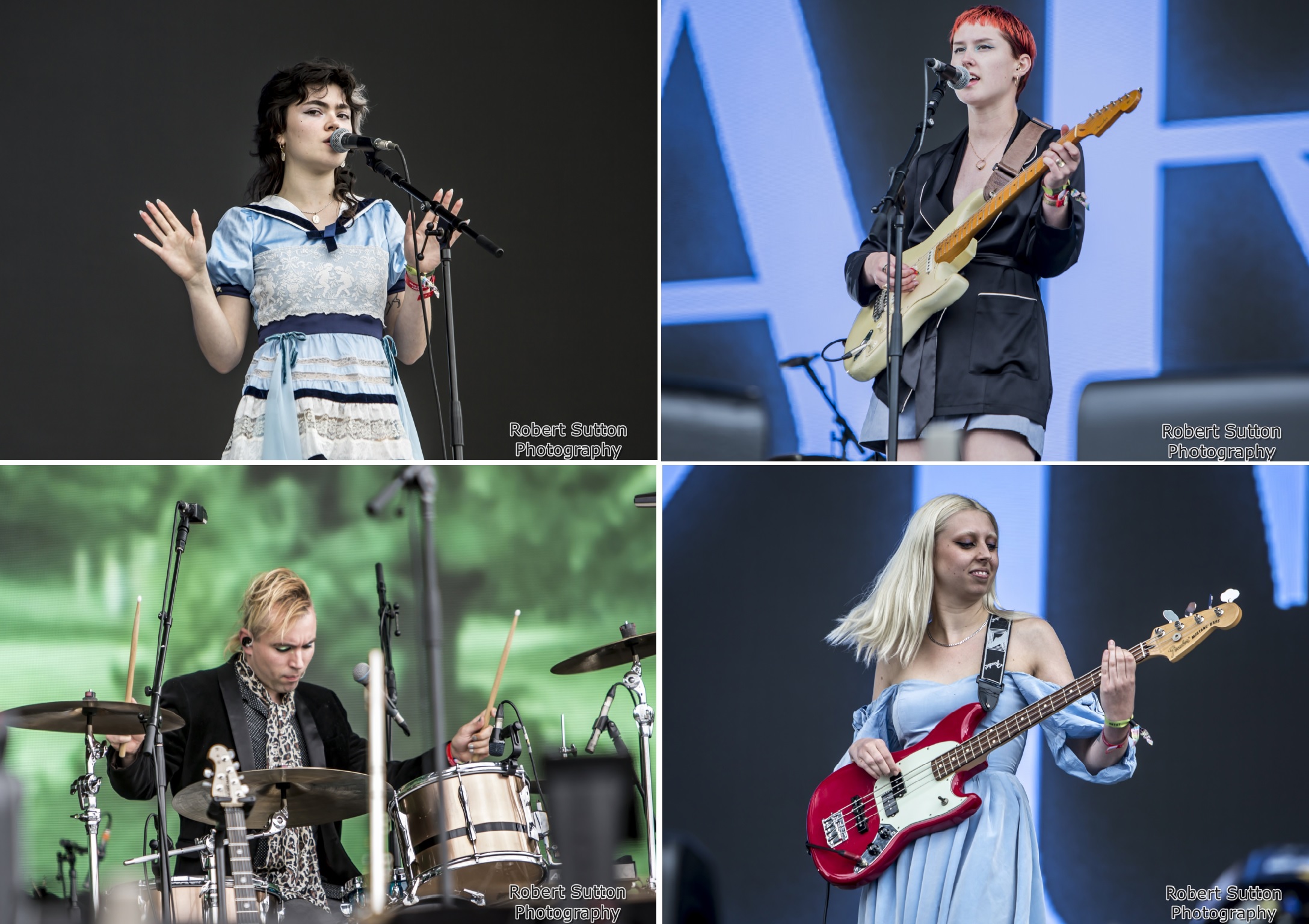 As it is, we head for the ‘Main Stage’, where a combo called The Dinner Party are underway. The band played live in Brighton at The Prince Albert at the tail end of June. They are London based and trade in vaguely dance influenced rock. Their lineup consists of vocalist Abigaille, drummer Rhys, guitarists Emily and Lizzie, keyboardist Aurora and bassist Georgia. 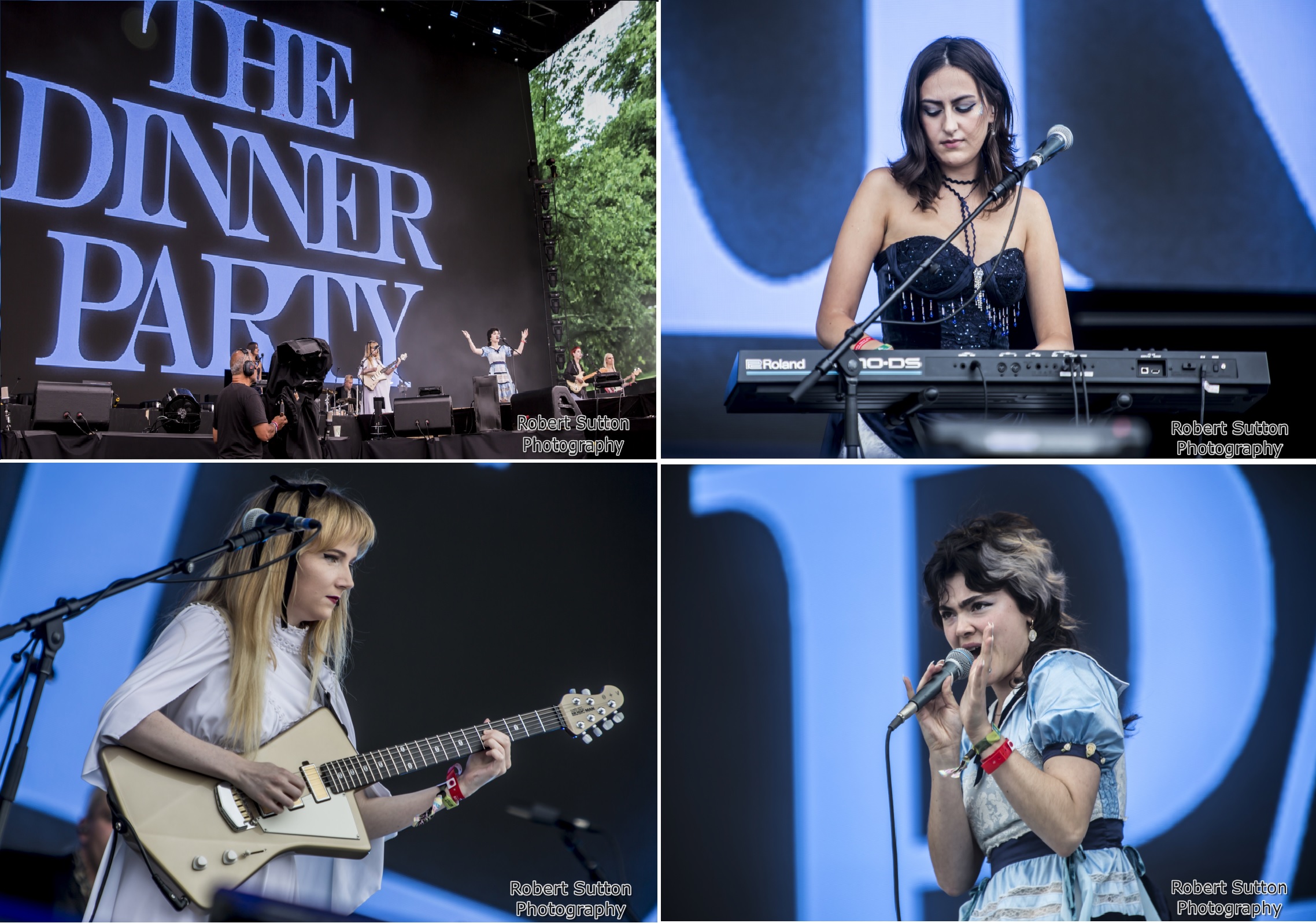 The female members are dressed in posh frocks and look as if they are indeed heading to a 19th Century dinner party. The music seems somewhat inoffensive and I must confess, doesn’t grab me. Possibly it’s because they’re playing on a massive stage in daylight. If the same band was playing in a small dark venue they would probably have a far greater impact. This, of course, means that I’m going to have to try to catch them playing one of their own gigs. 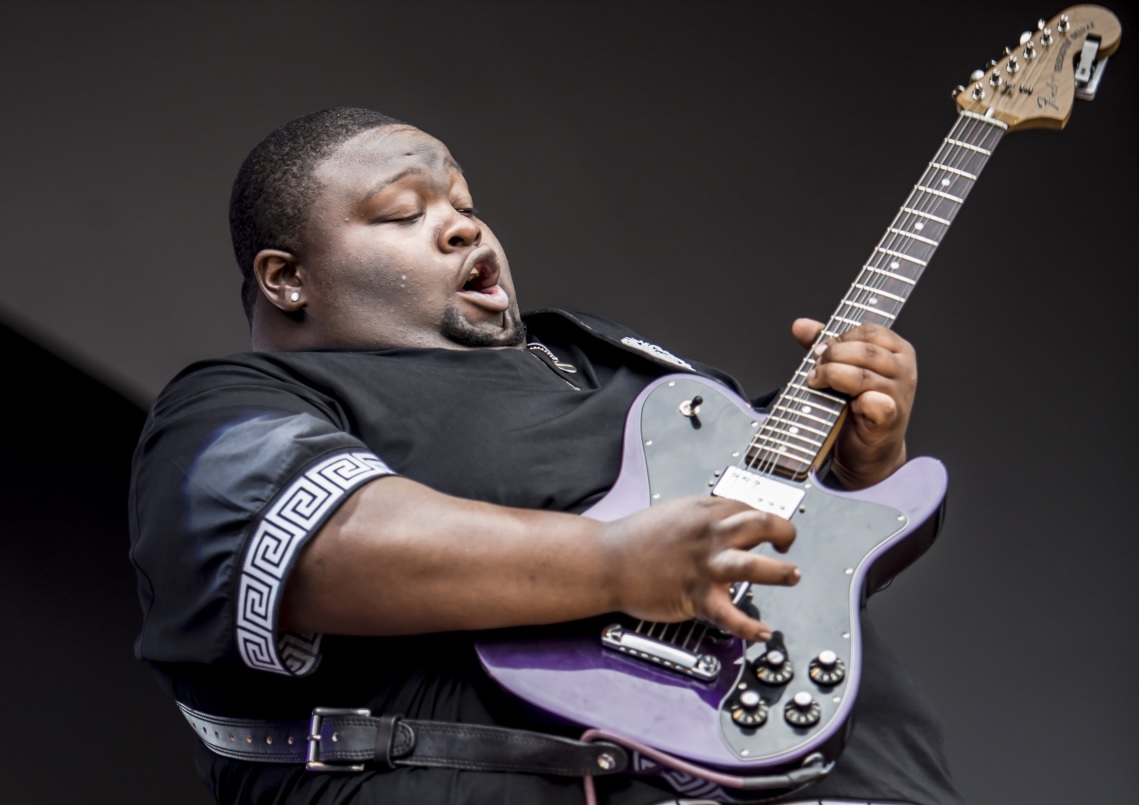 At the rear of the venue is yet another stage where Christone “Kingfish” Ingram is playing. Christone is a blues guitarist and vocalist with a frankly shit-hot band. We’ve all heard this kind of stuff a thousand times before, but it doesn’t make it any less enjoyable or impressive. A highlight for me is a fabulous Hammond organ sounding keyboard solo. 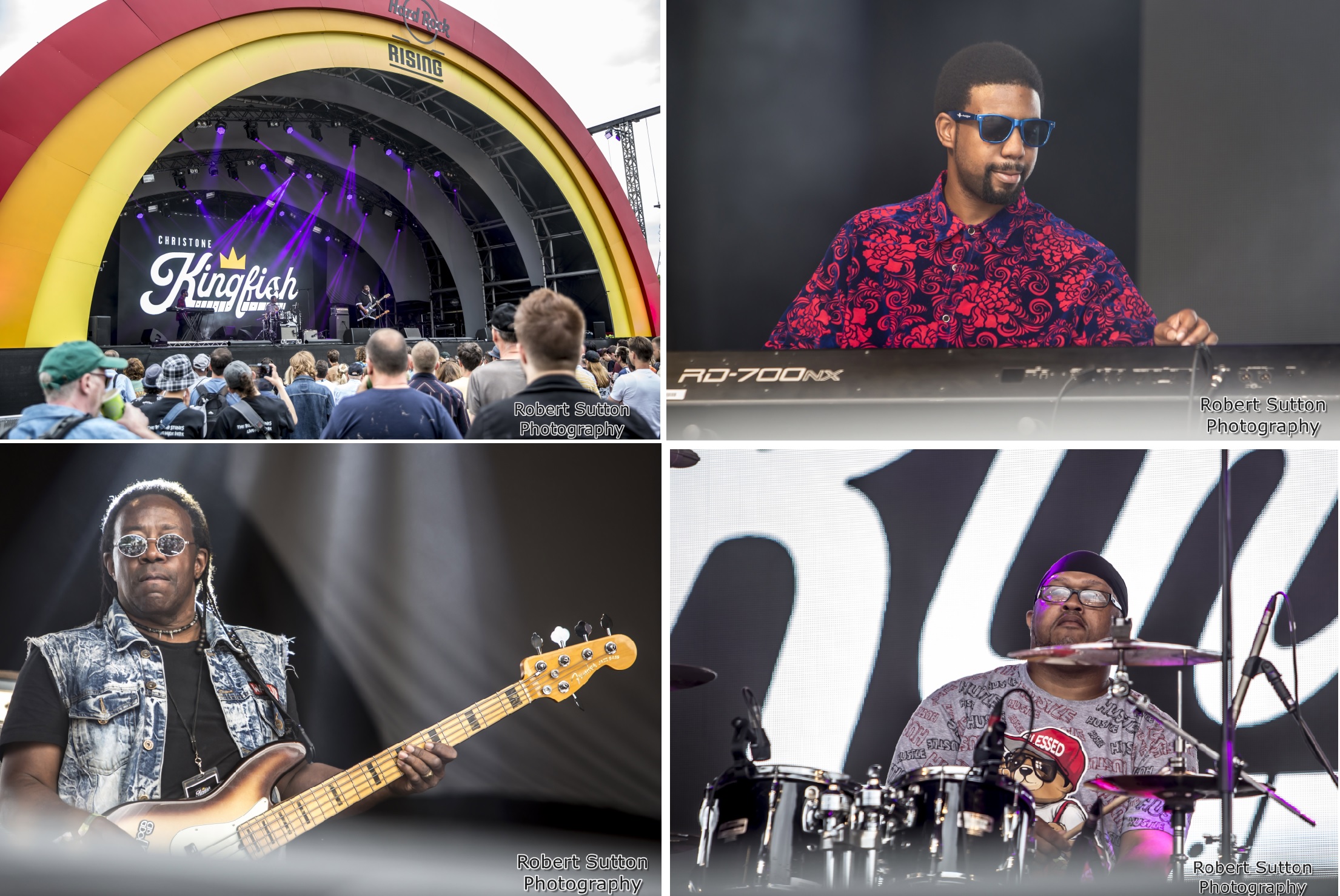 Christone “Kingfish” Ingram setlist:
‘She Calls Me Kingfish’
‘Fresh Out’
‘Empty Promises’
‘Too Young To Remember’
‘Outside Of This Town’
‘662’
‘Long Distance Woman’
‘Hey Joe’ 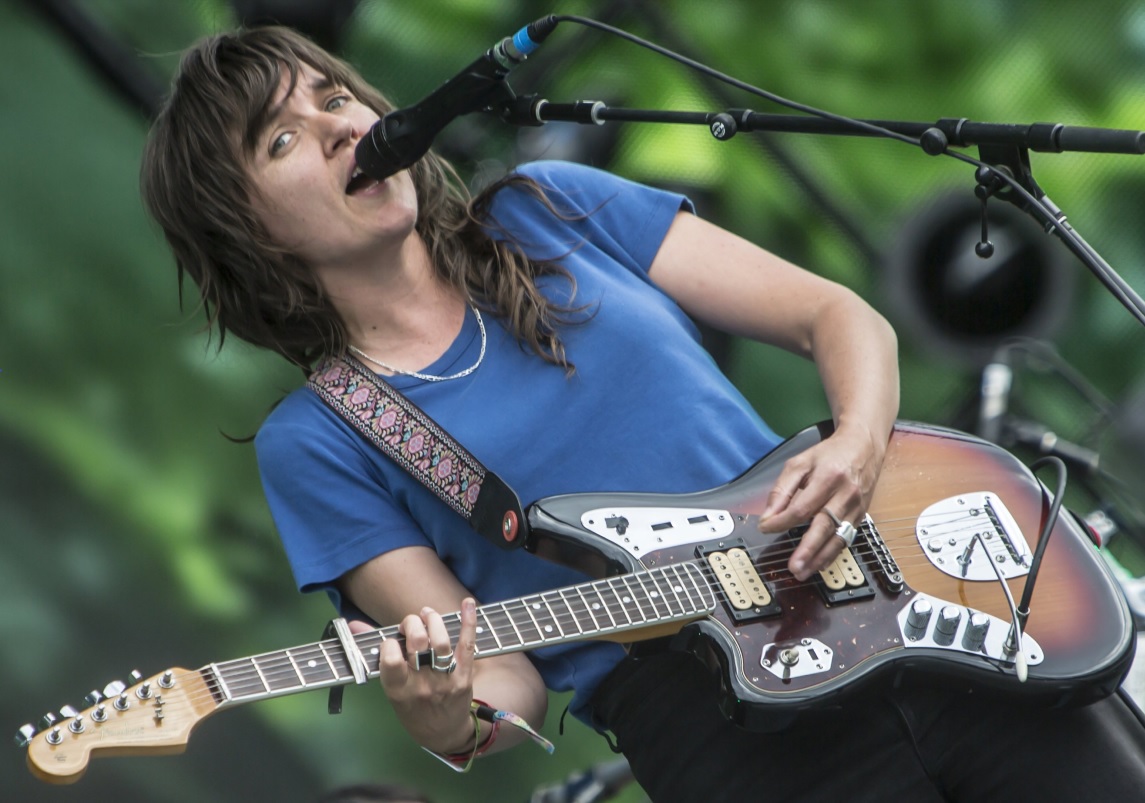 We then hotfoot it back to the ‘Main Stage’ for Courtney Barnett. Courtney seems to be playing a very similar set to when we saw her at Glastonbury a week before. More disturbingly, she also appears to be wearing the same t-shirt!!! I’m confident that she will have washed it in between times however. As usual, she is absolutely awesome. She is a great live performer. I’m sure that she could set a tranche of tax regulations to music and they would sound absolutely riveting. Brighton concert goers have the opportunity of catching Courtney live at the Brighton Dome Concert Hall courtesy of One Inch Badge on Saturday 12th November 2022 – Purchase your tickets HERE. 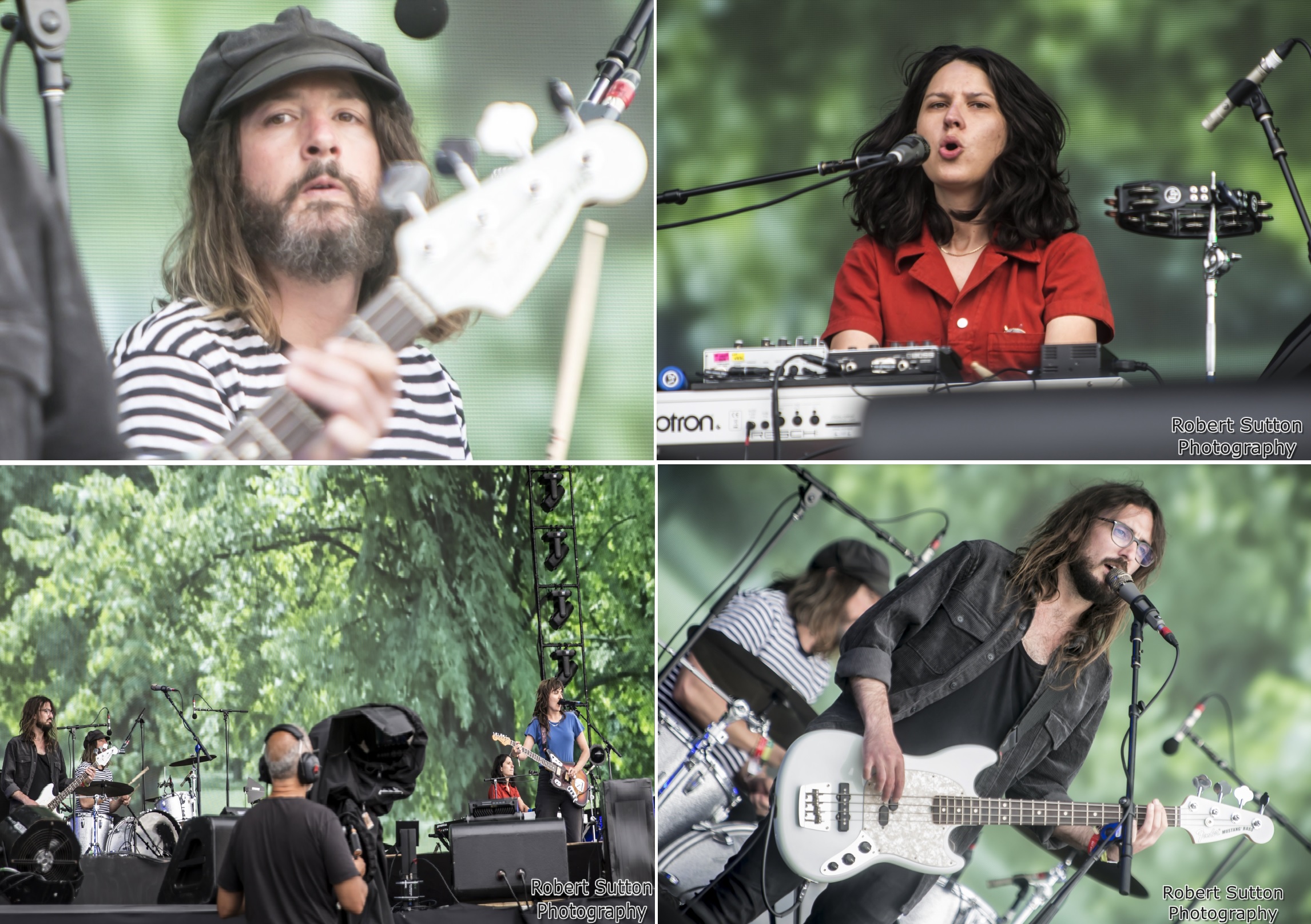 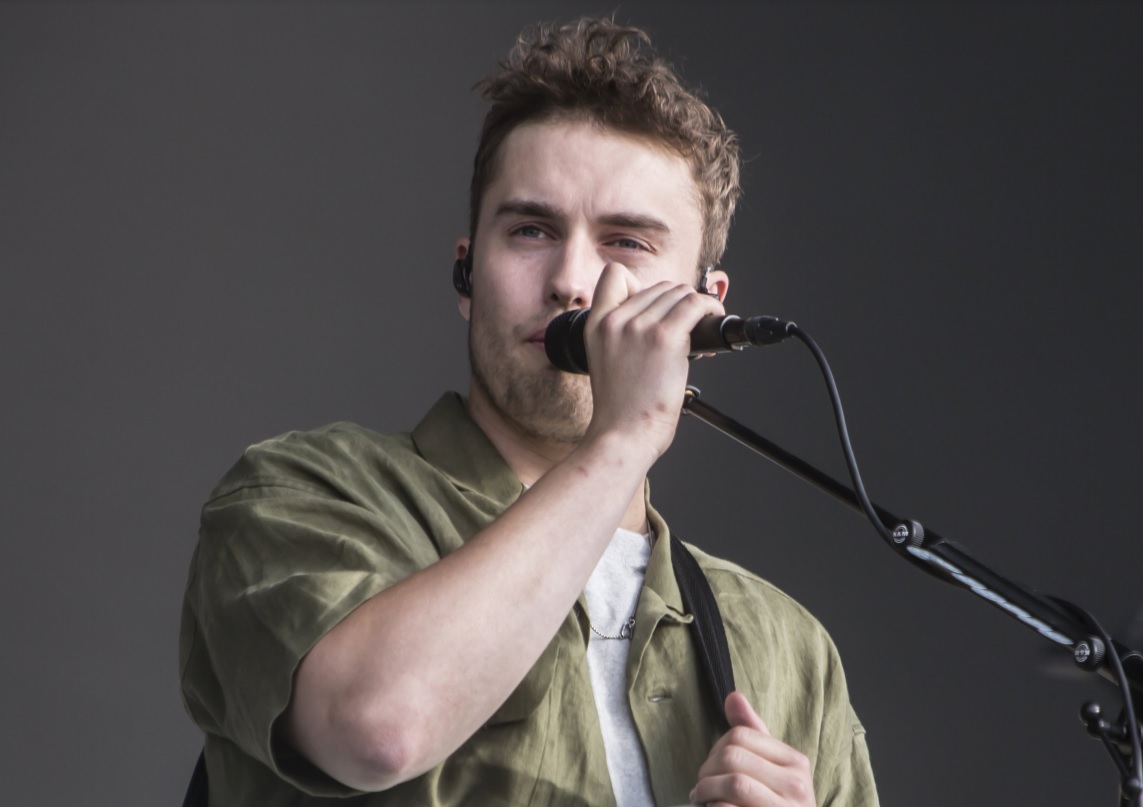 We stay at the ‘Main Stage’ for Sam Fender. This is something that I have absolutely not been looking forward to. Indeed, I am only here because I want to try to retain a half decent spot from which to watch the Stones. I must confess that hitherto I have lumped Sam Fender in with James Blunt, Ed Sheeran and any number of other middle-of-the-road purveyors of muzak that I detest. I am about to be proven wrong. 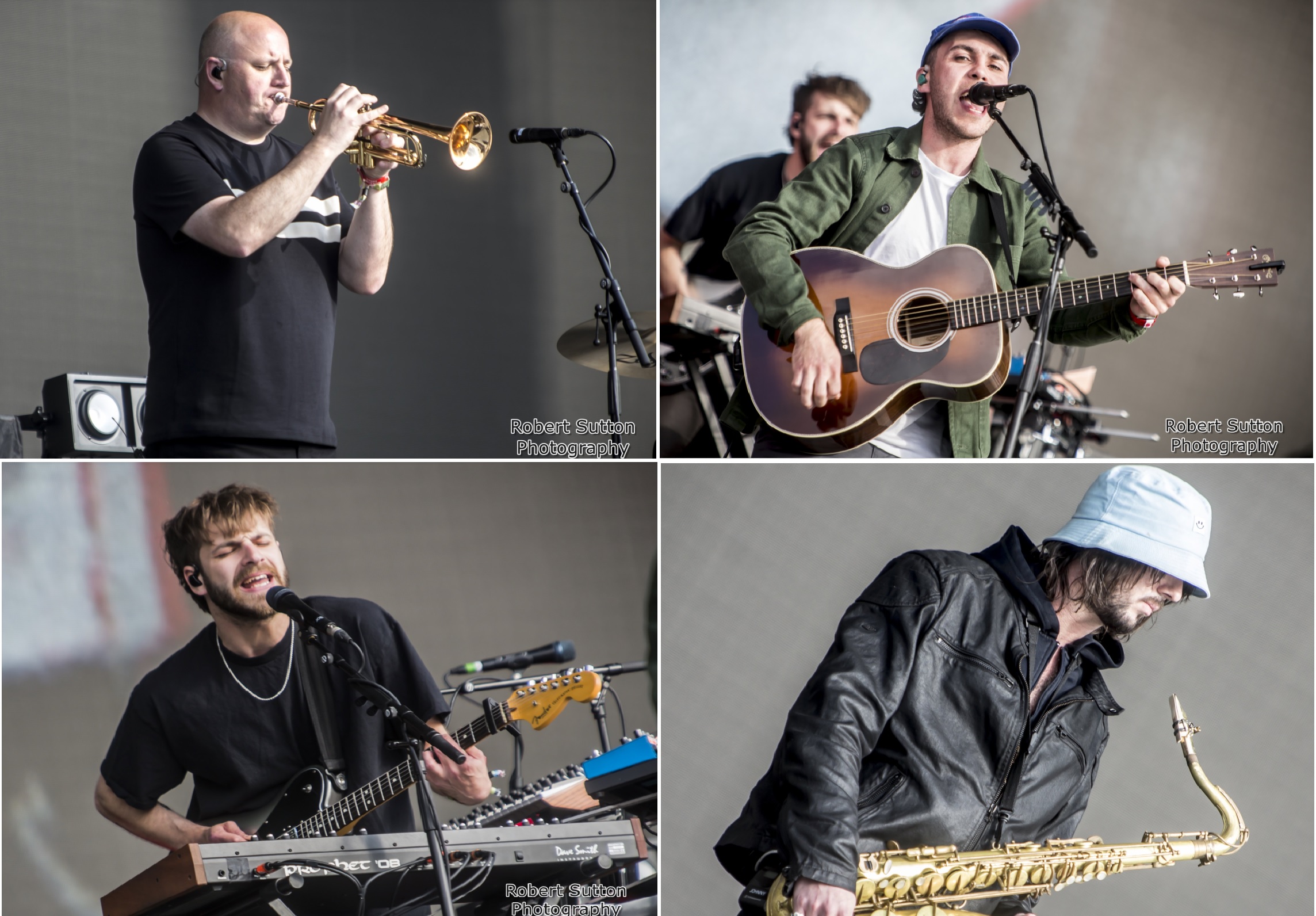 The Geordie troubadour and his band are from the off far gutsier than I anticipated. There are elements of Bruce Springsteen and the E Street Band about them. They seem heavier though. Sam is political too, both in terms of his songs and his onstage chat. He’s like an earthier Frank Turner. I must admit that I’m very pleasantly surprised. Sam played the Brighton Centre back in March and the Brighton & Hove News Music Team were there – Read our review HERE.

Sam Fender setlist:
‘Will We Talk’
‘Getting Started’
‘Mantra’
‘The Borders’
‘Howdon Aldi Death Queue’
‘Get You Down’
‘Spit Of You’
‘The Dying Light’
‘Saturday’
‘Seventeen Going Under’ 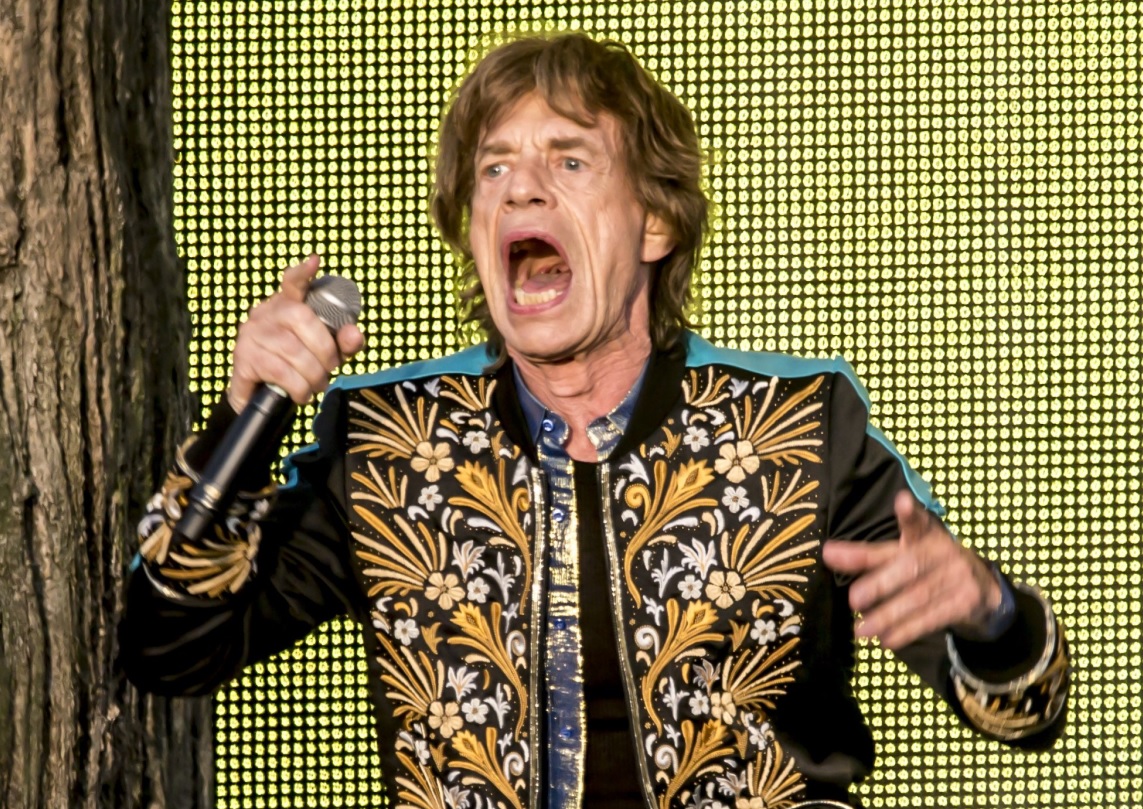 As the clock ticks down to The Rolling Stones’ showtime excitement and tension mounts. Will these old guys still be able to cut it? How will they sound without Charlie? As these questions (and more) are whirling around our heads a very moving video tribute to Charlie Watts plays on the big screen, and the band takes the stage. They cut into a quite funky version of ‘Get Off Of My Cloud’, not dissimilar to the version on 1977’s ‘Love You Live’ album. That’s followed by ‘19th Nervous Breakdown’. I don’t think I can remember the Stones digging quite so far back into their catalogue to start a set. Indeed, I’m not entirely sure that I’ve even heard them play these two songs before. Maybe they feel that by going back almost to the beginning they can affect some kind of rebirth. On the other hand, it’s seventeen years since their last album of original material (although a new album is rumoured to be in the pipeline) so it may simply be a case of not wanting to keep playing the same oldies – so they play different ones instead! 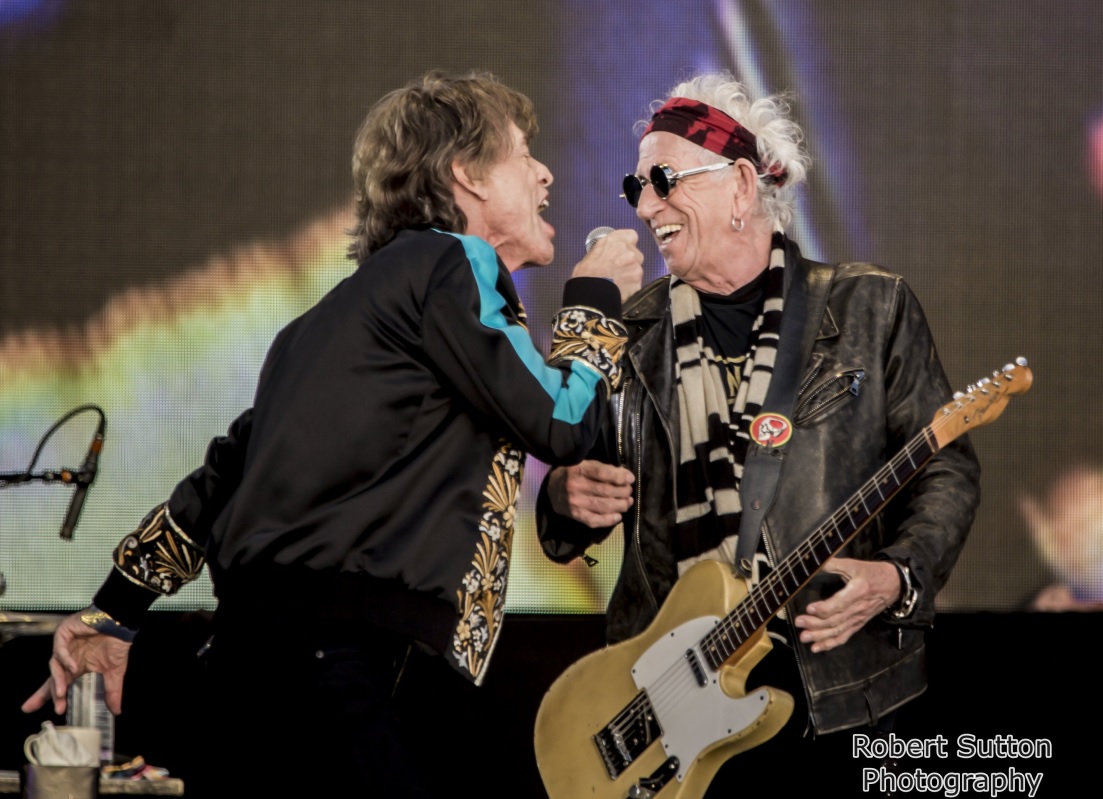 However, there are lots of songs that they can’t really get away with not playing, and ‘Tumbling Dice’ is one of those. Mick Jagger dedicates the song to Charlie Watts, and gets noticeably emotional in the process. ‘Out Of Time’ (another song that I don’t think I’ve heard them play before) gives us an opportunity to stand back and listen to the band, and in particular, Steve Jordan. He’s keeping it simple, just like Charlie would have done. There is however a difference with ‘You Can’t Always Get What You Want’. The coda seems much faster than it was with Charlie. Luckily the other guys can keep up! 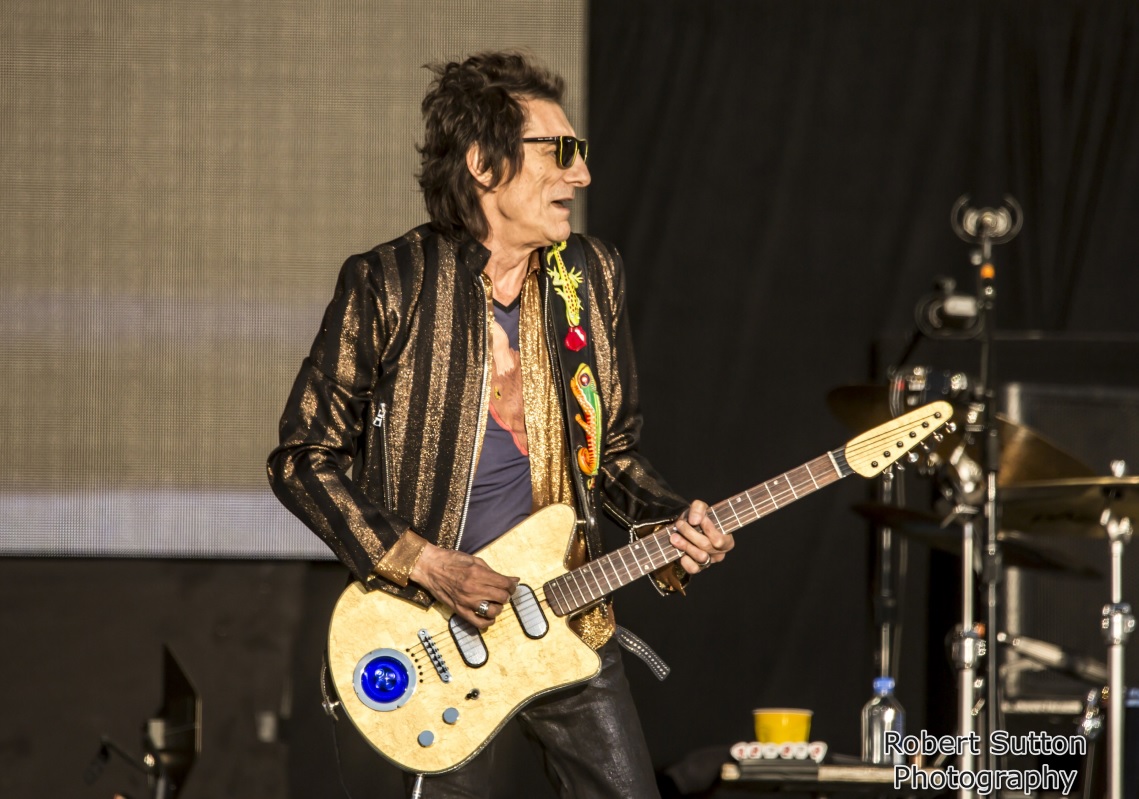 I have mixed feelings about the Stones covering ‘Like A Rolling Stone’. It’s kind of amusing the way that it’s almost become a theme song for them, but I would have preferred to hear another one of their own songs. However, Jagger’s introduction is very droll: he says the song is “by a guy who won the Nobel prize for literature”. Another piece of Jagger humour appears when he welcomes us “to the BST American Express super spreader event”. Pandemic? What pandemic? 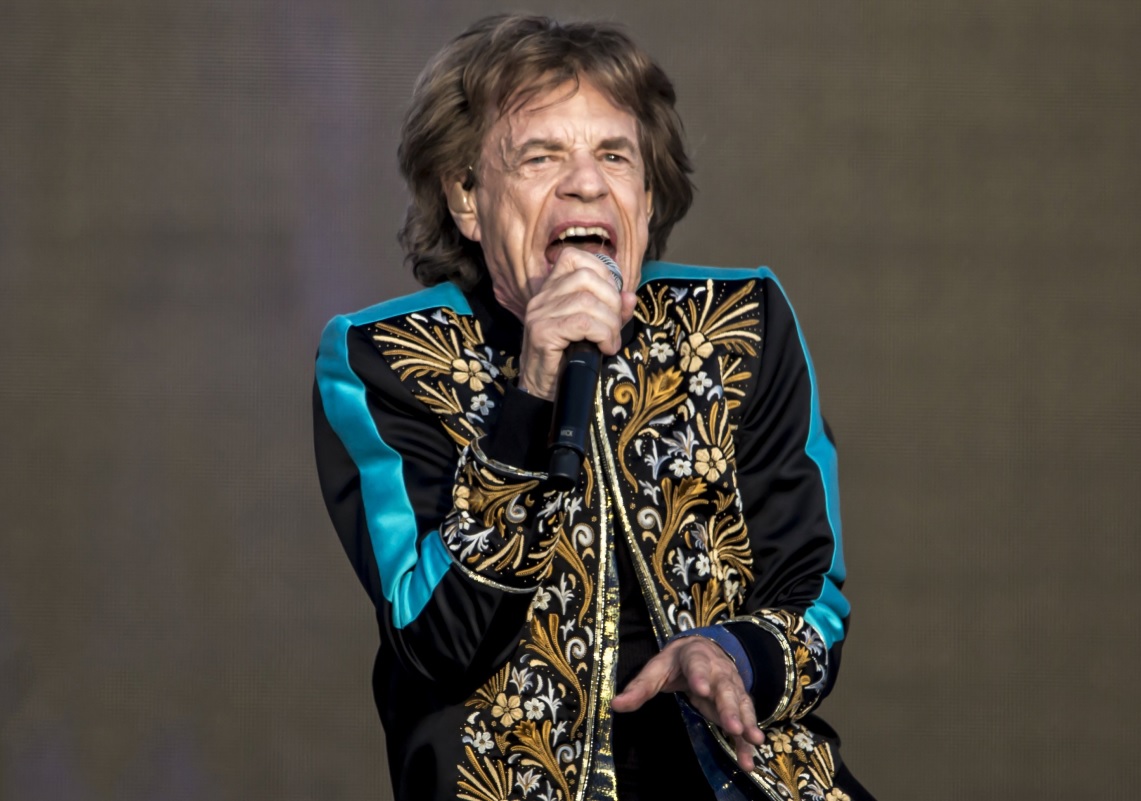 There are some songs in the (relatively) latter part of the band’s catalogue that are effectively identikit Rolling Stones. ‘You Got Me Rocking’ is one of those. It’s okay, but comparatively it’s filler. It is however followed by ‘Honky Tonk Women’, which makes a relatively early appearance in the set, and features keyboardist Chuck Leavell on cowbell. This is essential. Where would ‘Honky Tonk Women’ be without its cowbell after all? 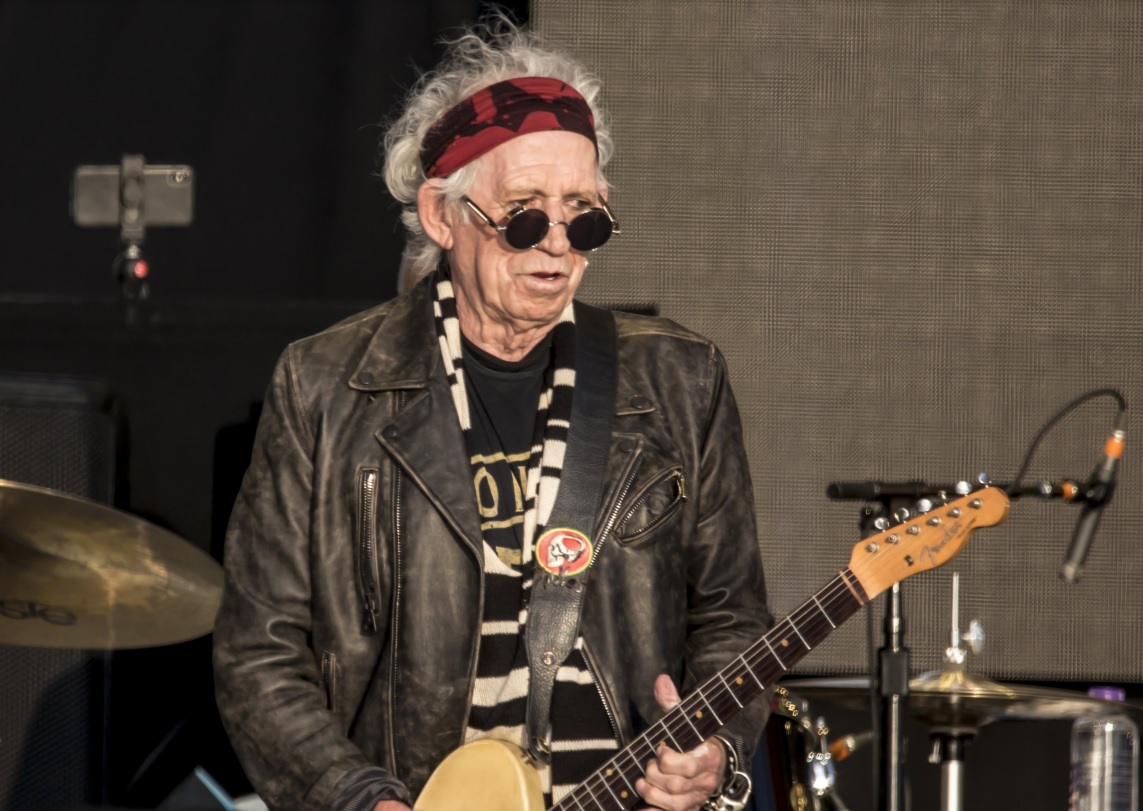 There is always a section of a Stones gig which is ‘Keef Time’, and tonight is no different. Mr Jagger gets to rest his vocal cords for a few minutes while Keith serenades us. Tonight we get ‘You Got The Silver’ from ‘Let It Bleed’, and ‘Happy’ from ‘Exile On Main Street’, which features Ronnie Wood on lap steel. Keith incidentally, is on fine form tonight. He appears to have finally stopped bothering to colour his hair, which now appears to be more white than grey, but the way he plays and moves around the stage makes him look far younger than he is. 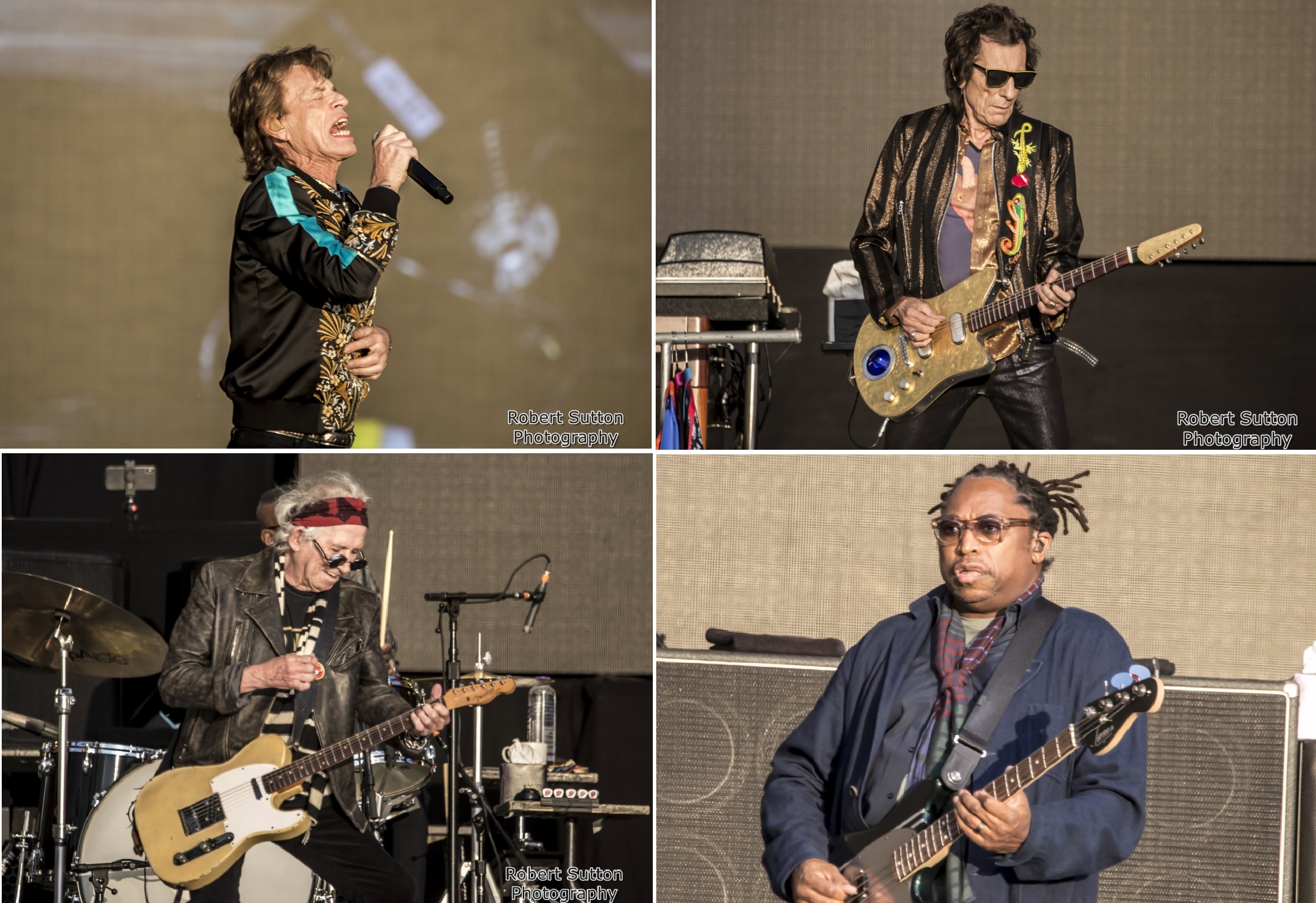 In 1978 the Stones made a brief foray into disco, and ‘Miss You’ makes an appearance. Mick Jagger plays guitar on this, and Darryl Jones takes a bass solo. One of the standout Stones live songs is ‘Midnight Rambler’. It’s a deeply unpleasant song in as much as it’s about rape and murder, but it is nonetheless a great song, and dates back to the days when ‘straight’ society viewed the Stones as being effectively in league with Satan. Tonight the song is an absolute highlight, albeit about a very unpleasant subject. 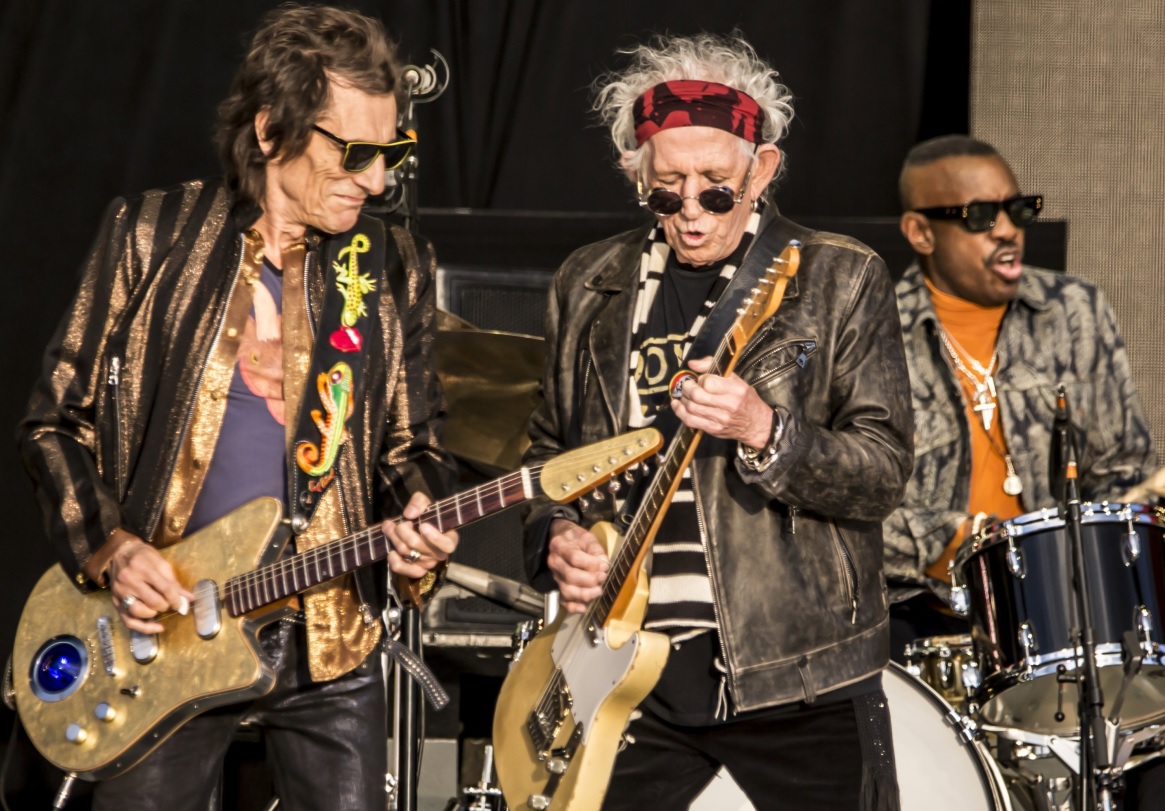 The Stones are now on the home straight, with ‘Paint It Black’ (another relatively rarely played oldie), ‘Start Me Up’, ‘Gimme Shelter’ (accompanied by Ukrainian flags and scenes of devastation in Ukraine), and ‘Jumpin’ Jack Flash’. The band are soon back for encores of ‘Sympathy For The Devil’ and the inevitable (but very welcome) ‘(I Can’t Get No) Satisfaction’. 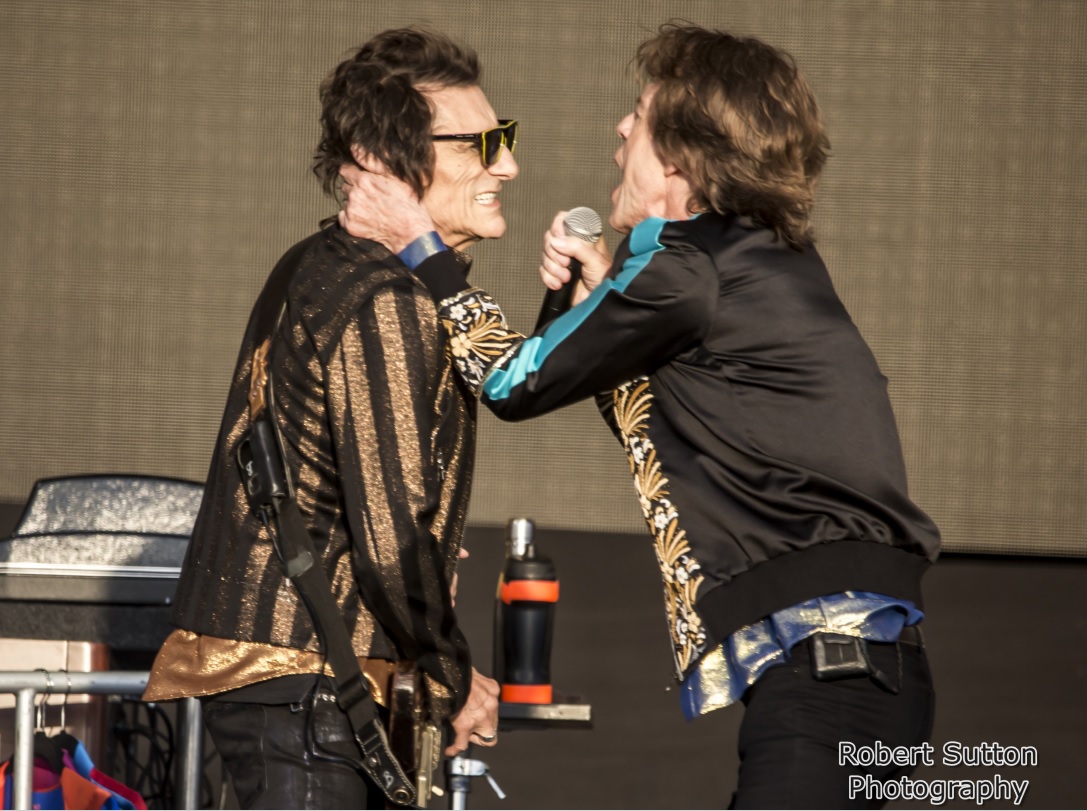 This has been an emphatically good gig which laid to rest any doubts that anyone here tonight may have had about the Stones carrying on without Charlie Watts. Steve Jordan does a great job. In fact, you can hardly see the join. The Stones played for a shade over two hours, and when they finished they looked as if they had plenty left in the tank. You really got the impression that without the strict curfew that is in place at Hyde Park they could have gone on for another hour at least. Yep, for old guys they did really well. 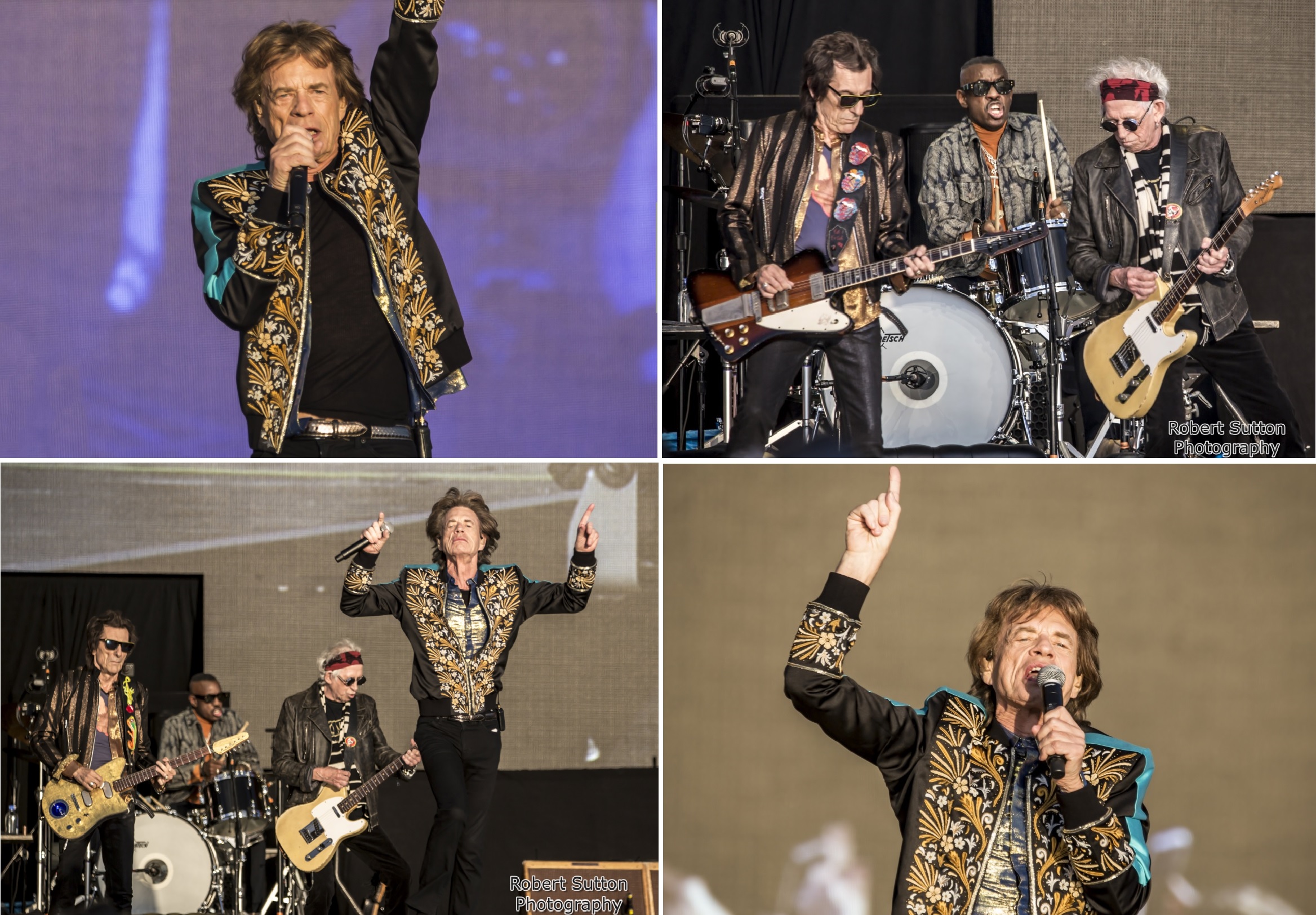 The Rolling Stones setlist:
‘Get Off Of My Cloud’
‘19th Nervous Breakdown’
‘Tumbling Dice’
‘Out Of Time’
‘Angie’
‘You Can’t Always Get What You Want’
‘Like A Rolling Stone’
‘You Got Me Rocking’
‘Honky Tonk Women’
‘You Got The Silver’
‘Happy’
‘Miss You’
‘Midnight Rambler’
‘Paint It Black’
‘Start Me Up’
‘Gimme Shelter’
‘Jumpin’ Jack Flash’
(encore)
‘Sympathy For The Devil’
‘(I Can’t Get No) Satisfaction’ 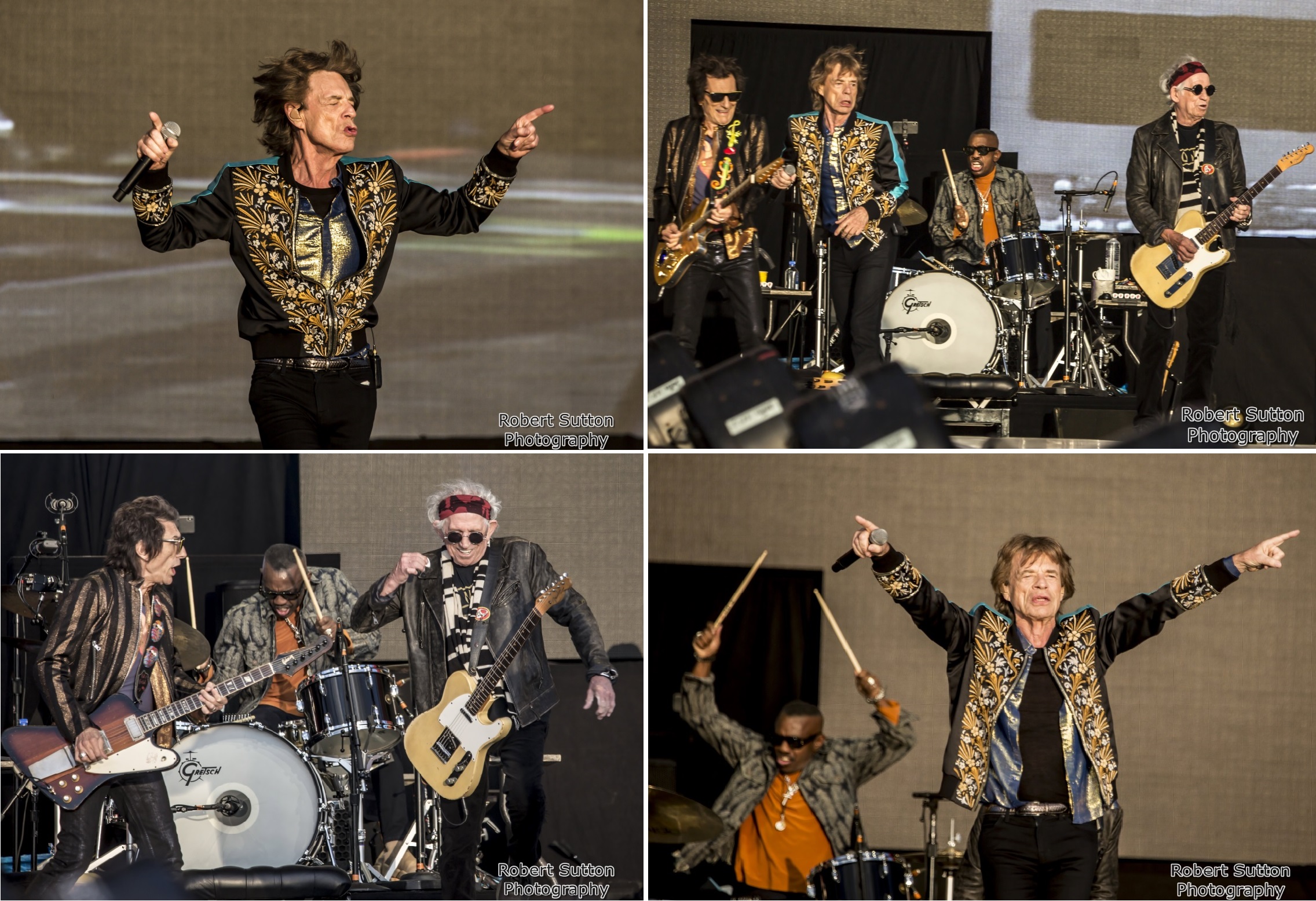 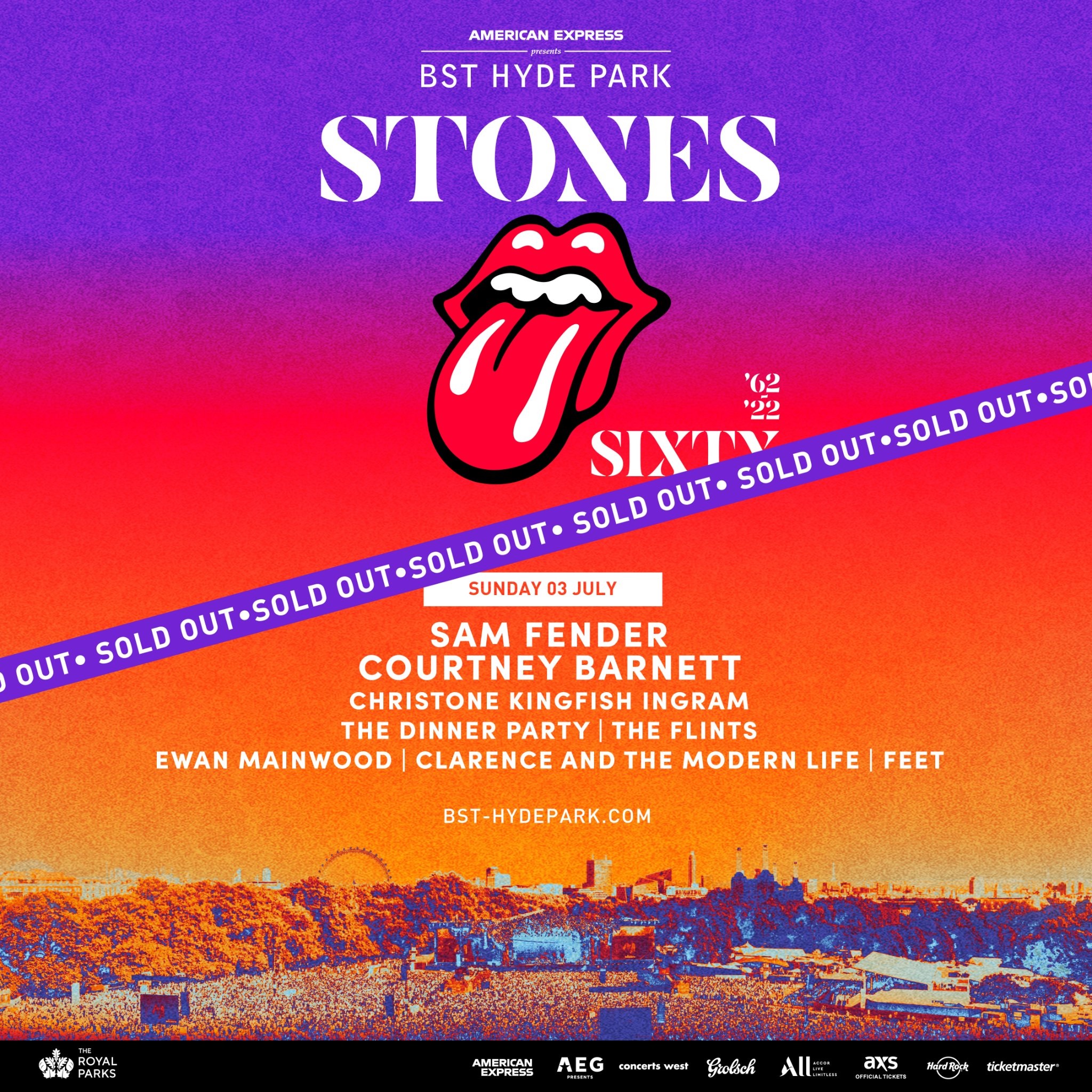