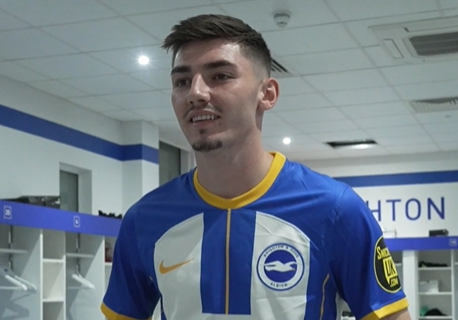 The Scotland international has signed a four-year contract and is eligible to face Leicester City on Sunday (4 September).

Head coach Graham Potter said: “Billy arrives with a fantastic pedigree, having played in the Premier League and Champions League as well as for Scotland at last year’s Euros. He will complement our existing midfield options.

“That experience at quite a young age shows the strength of character he has and we’re really excited by his potential.

“Now it’s about allowing him the time to get used to a new environment and settling in to our club. We can’t wait to work with him.”

The 21-year-old, from Ayrshire, came through the ranks with Glasgow Rangers before moving to Chelsea in 2017.

He made his Premier League debut aged 18 as a substitute against Sheffield United in 2019 before making two appearances in the Champions League in 2020-21 as Thomas Tuchel’s team won Europe’s biggest competition. Gilmour was an unused substitute in the final.

He spent last season on loan with Norwich City and made a couple of dozen Premier League appearances.

Gilmour said in an interview on the Albion website that he had spoken to two former Chelsea players who were now at Brighton – fellow teen Levi Colwill and 21-year-old Tariq Lamptey.

As a “technical” player, Gilmour said that he was looking forward to being part of a side that played good football like Brighton.