Dozens of trees have been “unlawfully felled” or “irreversibly damaged” on a plot of land in Brighton where a businessman plans to build a house.

An official report to councillors about the plot in Ovingdean Road said: “The site is mainly covered with trees, all of which are covered by a tree protection order (TPO).

“Seven were unlawfully felled on (Monday) 11 July and the rest (23) were irreversibly damaged by chainsaws.”

The owner’s agent Umut Kilic said that her client had appointed an arboriculturist – a tree expert – after advice from the council.

She said: “A tree surgeon was confused, considering that he would not require a specific licence to fell trees where the development would take place, and by mistake felled four trees.

“The client is a lay person who was frustrated with this.

“His neighbour thankfully informed the owner immediately, and the owner stopped them with an immediate action.

“By that time, unfortunately, four trees were felled by them. Further to this, we agreed with the planning (department) that these trees would be replanted and had a report prepared for this replanting.”

Independent councillor Bridget Fishleigh, who represents Rottingdean Coastal ward on Brighton and Hove City Council, said that she was horrified.

Councillor Fishleigh, whose ward includes Ovingdean, has objected to the plan to build a five-bedroom detached house on the site, next to a property called Hillside.

She said: “I am horrified that trees with TPOs have been felled and damaged to make way for this proposed dwelling.

“I am pressing the council to penalise the land‐owner through prosecution or a hefty fine.”

The council granted outline planning permission three years ago for a two-storey detached house on the land which is by a sharp bend in Ovingdean Road.

The original applicant, Mike Langley, said that the loss of some of the sycamore trees would be justified, while an arboricultural report said that much of the vegetation on the plot had grown unchecked.

A report to the council’s Planning Committee included an objection submitted in March – before the trees were felled or damaged – by Conservative councillor Mary Mears, who also represents Rottingdean Coastal.

Councillor Mears said: “The site is situated on the steep part of Ovingdean Road on a blind bend on the left as you go down.

“There are a large number of healthy trees on the site, all with TPOs on them, which would need to be felled to accommodate this development.”

She added that the site was also close to a wildlife corridor. 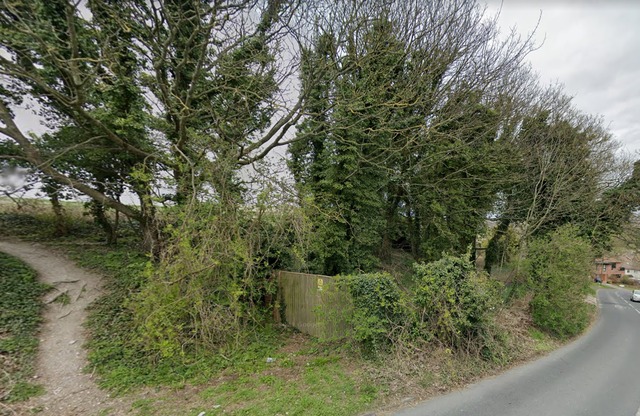 Twenty-five objections have been sent to the council, raising concerns about lack of parking, the effects on wildlife and the effects on the South Downs National Park.

A previous planning application was turned down because of the location – between two tight bends – but, despite this, the 2019 outline plan was approved.

Ovingdean Residents and Preservation Society said: “This is still an inappropriate and dangerous place to site a dwelling, so close to a blind bend and on a steep hill.

“The road is heavily used by schoolchildren, horse riders and fast-moving traffic which ignores the speed limit, and vehicles accessing the property would pose a risk.

“The applicant has not provided any details of how the property would be linked to the existing pedestrian footpath as they were required to do at the outline stage.

“Access to anyone arriving on foot or by wheelchair would be extremely difficult.

“The applicant has not provided any landscaping details whatsoever on how the property would be built among the 30 densely packed TPO trees and the application should be refused on this basis.”

The report to the council’s Planning Committee recommended that councillors approve the latest proposals.

The Planning Committee is due to meet at 12.30pm on Wednesday (5 October) at Hove Town Hall. The meeting is scheduled to be webcast on the council’s website.