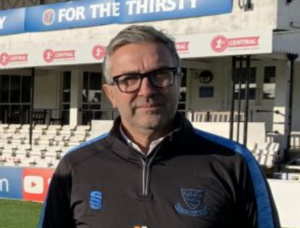 One of the two head coaches at Sussex, Ian Salisbury, is leaving the club as the cricket season draws to a close.

The departure of Salisbury, 52, was announced this morning (Friday 30 September) the day after Sussex ended their County Championship campaign seventh in Division Two.

They won just one of their 14 championship matches – against Derbyshire at Hove in June – their first victory since April last year.

Salisbury is understood to have been on gardening leave since mid-August, with fellow head coach James Kirtley stepping in.

The pair took over at the start of last season after Jason Gillespie went back to Australia.

The club issued a statement this morning. It said: “Sussex Cricket announces that Ian Salisbury, co-head coach (Championship and 50-over), is leaving the club as the season comes to an end.”

Chief executive Rob Andrew said: “We would like to thank Ian for his contribution to the club over the last couple of years and wish him well for the future in whatever this may hold.

“He has helped develop a very promising group of young players and we are looking forward to seeing them develop further in the next few years.”

Salisbury said: “I’ve really enjoyed my time at Sussex for the last two years and the journey has really helped me after the loss of my wife.

“However, it’s the right thing for myself and daughter to look for a fresh challenge.

“I want to thank the backroom staff, ground staff, foundation, office staff, catering and stewards for their support throughout my time at Hove.

“Whoever takes over from myself will inherit a very talented homegrown squad who, if supported from above, are ready to fly in next few years.”