A mugger stole a fake Rolex watch and a pair of Ray-Ban sunglasses from a festival-goer, Sussex Police said yesterday (Thursday 6 October). 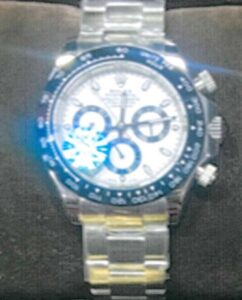 The force did not give the age of the victim but said that he was leaving a toilet cubicle in Stanmer Park when he was robbed by three people whose gender was not given.

Sussex Police said: “Police are appealing for witnesses to a robbery at Boundary music festival in Brighton.

“The victim was leaving a toilet cubicle at the event in Stanmer Park when he was assaulted by three unknown suspects around 9.30pm on Saturday 24 September.

“The victim suffered a number of cuts to his hand and had a replica Rolex watch and a pair of Ray-Ban sunglasses stolen.

“Police investigating the robbery are keen to hear from anyone who saw what happened or who may have seen the watch (pictured above) being offered for sale since.

“Anyone with information is asked to contact police online or by calling 101 quoting serial 1324 of 24/09.