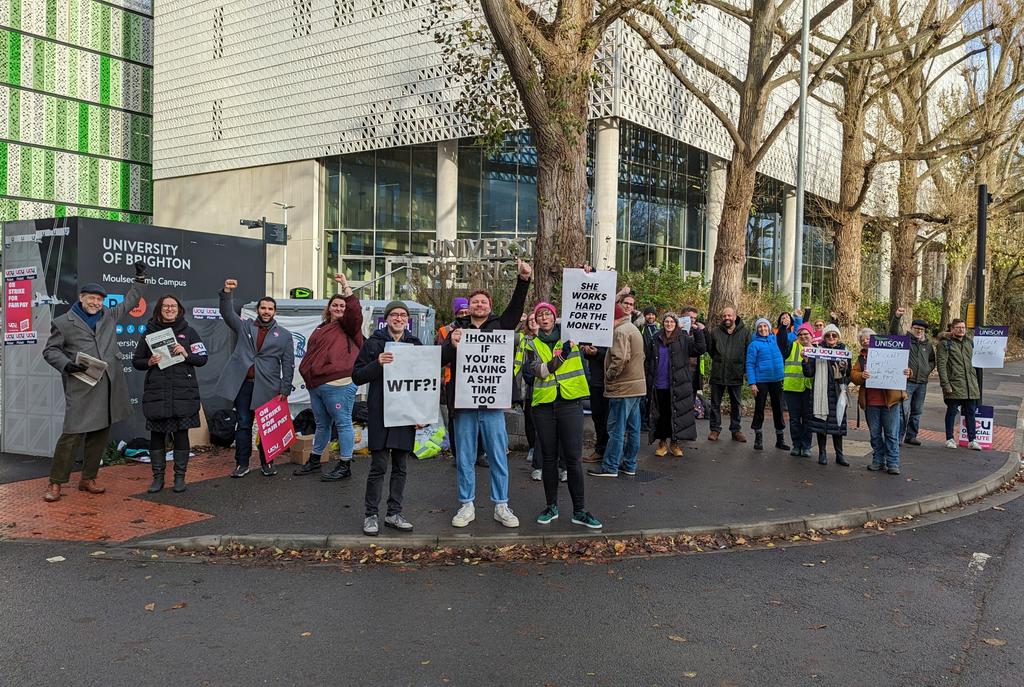 UCU members on strike at the University of Brighton’s Mousecoomb campus. Picture by @BrightonUCU on Twitter

University staff across the city have staged the first of three strike days today.

University of Sussex staff are also in dispute about attacks on pensions too.

They will also be walking out on Wednesday next week, the same day that hundreds of staff at sixth form colleges including Varndean College and BHASVIC are due to walkout in a one-day strike over pay called by the NEU.

Today, Brighton and Sussex are joining about 150 universities across the country after members voted in its first successful national ballots since anti-union laws were passed in 2016.

The union says universities have not improved on the 3% pay offer already on the table.

The union is asking for meaningful pay rises, the end of insecure contracts and action to deal with dangerously high workloads.

In the pension dispute, UCU is demanding employers revoke cuts made earlier this year which it says will see the average member lose 35% from their guaranteed future retirement income.

“They have had enough of falling pay, pension cuts and gig-economy working conditions – all whilst vice-chancellors enjoy lottery win salaries and live it up in their grace and favour mansions.

“Staff are burnt out, but they are fighting back and they will bring the whole sector to a standstill. Vice-chancellors only have themselves to blame. Their woeful leadership has led to the biggest vote for strike action ever in our sector.

“Students are standing with staff because they know this can’t go on. And they know that a sector which generates tens of billions of pounds each year from tuition fees can afford to treat its staff fairly.

“Further disruption can be avoided if the concerns of staff are addressed with urgency. But the overpaid vice-chancellors killing our sector should be under no illusion: 70,000 dedicated university workers are ready to take even bigger action in the New Year.”

“We are disappointed that this industrial action is taking place and are working hard to mitigate any potential disruption for our students across these three days.

“As ever, we will continue to engage with our unions and try to work constructively with them on the issues they raise.”