Controversial changes to Hove Library look likely to go ahead despite opposition from Conservative and Green councillors and local conservation groups.

The Labour administration has been criticised for its handling of the changes, with the Conservatives claiming a partial victory for winning a number of key concessions.

Planning permission is expected to be granted today (Wednesday 6 June) for the latest proposed changes. These are to the back garden where new steps, a handrail and landing are planned.

If agreed, a children’s nursery – Hove Village – is then expected to rent the basement from Brighton and Hove City Council which owns the 110-year-old grade II listed building.

An earlier application by the council – to the council itself – was decided with uncharacteristic speed, generating considerable criticism.

The Brighton Society said: “The city council proposes to carry out alterations to the main ground floor library space which will destroy the most important characteristic of its internal design – the radiating layout of bookshelves within the semi-circular plan of the library.

“This almost unique layout is one of the reasons for the building’s grade II listing.

“The alterations propose to replace a significant amount of the radiating bookshelves area with a large enclosed office.

“Some of the bookshelves have already been removed and replaced with a storeroom, lift and disabled WC.

“This will effectively destroy the existing character of the space and with it one of the main reasons for its listed status.

“That a council, one of whose duties is to conserve and protect our listed buildings, can propose such vandalism is a disgrace.” 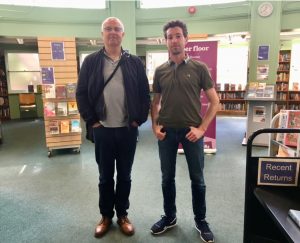 He said later that the council had agreed a number of concessions, amounting to a partial restoration of surviving ground floor features including

Councillor Nemeth said: “I can’t say that I am thrilled that space on the ground floor is being lost.

“The plans were not run past me, as they should have been as a member of the cross-party working group, when the planning application was submitted for the works.

“The concessions that Councillor Wealls and I have won, with Green Party support, at least go some way towards making up for the space going.

“I look forward to the restoration work progressing quickly.”

Councillor Nemeth, who has spoken out previously on behalf of the historic and purpose-built Carnegie Library, said that it was “a key victory … that will see a historic section of Hove Library restored to its original glory.

“The news follows a public outcry over the administration’s announcement that a section of the popular library’s ground floor is to be taken out of public use to become a new staff room.”

The project was frozen after a motion at full council in April by Councillors Nemeth and Wealls won support from both opposition parties.

With the further planning application being dealt with publicly at Hove Town Hall today, work has resumed with the aim of generating an income to help ensure that the library is financially sustainable.