Brighton’s London Road is set to get another boost thanks to £70,000 of funding for local art. 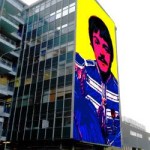 Half the money has come from the developers of the old Co-op building as a condition of securing planning approval, and the rest is match-funding from the EU.

A competition was then run by Recreate, an EU project to regenerate cities by supporting cultural industries, and Brighton and Hove City Council to find ideas on what the money should be spent on.

The announcement of a winner is now imminent. The London Road LAT says in a blogpost: “No doubt people will think of many things that could be achieved in all sorts of ways with £70k, but of course the money is made available only under strict conditions as to what it is spent on!

“There is also no doubt that a venture like this will not end up pleasing everyone – but community engagement was one of the criteria for each entry.”