Firefighters were called to put out a tent fire in Madeira Drive this afternoon. 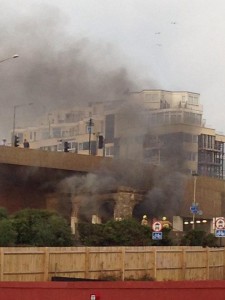 A spokeswoman for East Sussex Fire and Rescue said the switchboard received several calls when the tent went up in flames at 5.30pm.

A crew from Roedean used one hose reel to quench the flames. Nobody was injured and firefighters spent some time making the area safe.

The tent is believed to belong to a homeless person who has been camping out there for several weeks.